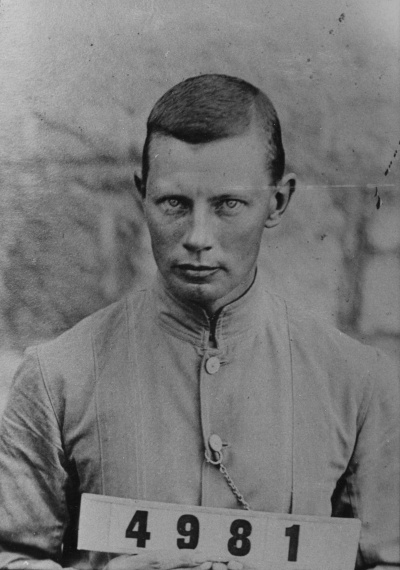 Prior the First World War Hans Overbeck was a manager at the German trading house Behn Meyer and Company based in Singapore.

He was incarcerated as an enemy alien by the British authorities from 1914 to 1919, first in Singapore and then at Holsworthy (Liverpool) and Trial Bay internment camps in Australia. After the war he returned to Behn Meyer, and was later based in Java in the Dutch East Indies. He retired in 1931 to live in Jogjakarta.

Overbeck was incarcerated again in 1942, during WW2, by the Dutch. He was killed when the ship Van Imhoff, which was carrying German prisoners to India to evade advancing Japanese forces, was sunk off Sumatra. It was his tragic misfortune to spend nearly 20% of his life as a prisoner of war, and to die a prisoner.

Overbeck is pictured here in prison uniform following arrival in Sydney on 17 April 1915 (this is one of only 4 known images - his and his family’s effects having been destroyed in Java and Bremen during WW2).

He was a prominent Malayologist, talented linguist and expert photographer, with several books and many ethnographic and linguistic articles to his credit. His work in this area is still very significant to researchers.

Prior to 1913, when Pseudolasius overbecki was described, Overbeck collected ants in Singapore for Hugo Viehmeyer. He was an opportunistic collector of ants and other insects at both Australian prison camps. Viehmeyer described 45 new species or subspecies in 20 genera (including the new genus Peronomyrmex) from Overbeck’s Australian ant accessions. Trial Bay is the type-locality for 24 taxa and Liverpool for 19. The ant taxonomists Forel and Kutter also worked with Overbeck specimens.

From 1919 to 1938 records indicate that Hans regularly contributed Indonesian insect and other specimens to the Museum für Tierkunde, Dresden.

Patronymic names include the ant genus Overbeckia and a number of ant and other insect species.