This species apparently is subterranean, as it lacks eyes and was collected in a subterranean bait. No specimens were collected in surface baits or in pitfall traps. It was collected in a highly disturbed area in a grassland mixed with a few small trees (Acacia sp., Prosopis sp.). The area is flat with loam soils. Neivamyrmex harrisii and Neivamyrmex swainsonii, in addition to several other ant species, occur in the area. Labidus coecus and Solenopsis geminata were also collected in subterranean traps. The area was moderately infested with the red imported fire ant, Solenopsis invicta. (Mackay 1988, as reported for the synonomized N. isodentatus)

Neivamyrmex moseri is easily separated from all other described United States species by its unique mandibular structure: there are three large teeth that are usually approximately equal in size; much smaller intercalary denticles may be present. We should note further that the statement by Watkins (1969) that N. moseri workers lack a subantennal lamella is only partly correct; the lateral extension of the frontal carina that runs below the socket is present, but is not elevated to form a distinct lamella in most specimens examined. A low lamella is present in a few specimens. (Snelling and Snelling 2007) 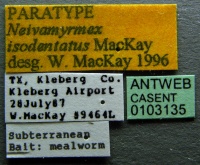