Nothing is known about the biology of Myrmica tschekanovskii.

M. tschekanovskii is characterized by the 12-segmented antennae of its males. Based on this feature, Radchenko (1994a) placed it to the arnoldii species group (= former subgenus Dodecamyrmica). However, M. tschekanovskii males have a relatively long scape (SI1 > 0.70), while males of Myrmica arnoldii have short scape (SI 1 < 0.40) and under our more recent approach to the species group concept in genus Myrmica, species with such large differences in the male morphology probably do not belong to the same group. Thus the taxonomic position of M. tscheknovskii is somewhat uncertain, perhaps, it should typify its own separate species group. (Radchenko and Elmes 2010)

Queens have not been collected. 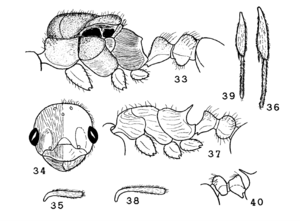 Colour reddish-brown (apparently the specimens studied have lost their colour they are more than 100 years old).