This rarely encountered species is presently known from a small area in the Florida Panhandle and adjacent Alabama.

Although the postpetiolar protrusion clearly differentiates M. cooperi from M. americana, the small size of this species is, in my experience, diagnostic as well. For this study, I examined 597 specimens of M. americana in the Archbold invertebrate collection without finding any specimens 2 mm long or less. These specimens include 54 specimens from the 3 Florida counties where M. cooperi was found. The collection of M. americana includes specimens from the following additional states: Alabama, Arkansas, Georgia, Kentucky, Illinois, Maryland, Missouri, New Jersey, New York, North Carolina, Ohio, Oklahoma, Pennsylvania, South Carolina, Tennessee, Texas, Virginia, and Washington, District of Columbia. Although the number of specimens of M. cooperi bis small, they represent 7 separate collections of specimens with the same suite of character states. 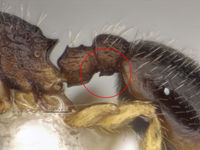 Deyrup (2015) - The Florida Panhandle and adjacent areas of Alabama and Georgia constitute 1 of the 6 most significant centers of biodiversity in the United States (Chaplin et al. 2000). The hardwood forests of the Florida Panhandle include relict distributions of Appalachian flora that survived the vicissitudes of the Pleistocene in riverine forests and steepheads (Platt & Schwartz 1990). These southern habitats were protected not only from cold during various glaciations but also from Pleistocene drought because they are on seepage slopes of sandy uplands that continue to release water even during dry periods (Platt & Schwartz 1990). Myrmecina cooperi appears to be rare enough that it would be easy to be overlooked if it had a wide range, but at present it can be considered a southeastern endemic with a restricted geographic range.

Specimens collected by the author were extracted from leaf litter, using #2831 Berlese funnels (BioQuip Products, Inc., Gardena, California, USA). Leaf litter was brought back intact to the laboratory and sifted with a coarse screen just before extraction. A few additional specimens were sifted from litter in the field. Two specimens were extracted by other collectors, using some type of Berlese funnel. Type material was deposited in the ant collection of the Harvard Museum of Comparative Zoology (Museum of Comparative Zoology) (Cambridge, Massachusetts, USA) and the arthropod collection of the Archbold Biological Station (Archbold Biological Station) (Venus, Florida, USA).

Named in honor of the Robert J. Cooper family of Palm Beach, Florida, USA, in recognition of strong support for the biodiversity program of the Archbold Biological Station.