A member of a small complex of SE Asian Leptogenys species (L. chalybaea species group, Arimoto & Yamane 2018). In Cambodia, Thailand and Vietnam workers of species in this group have been observed linking their bodies in chains during the retrieval of freshly immobilized large millipedes (see below, the Leptogenys cyanicatena species page and Peeters & De Greef, 2015). Chains are a striking example of cooperation in ants, and this behavior is a novel method of prey transport.

The most recent examination of the distribution of this species (Arimoto and Yamane 2018) determined this species is known from East Malaysia (Borneo): Sarawak, Sabah. Additional occurrence data from other locations are not believed to be this same species.

Arimoto and Yamane (2018) - Leptogenys chalybaea was observed nesting in soil under a rock and foraging on the forest floor in Borneo, Malaysia. The hunting behavior of this species has not been observed. The ecology of this species is thought to be similar to that of Leptogenys cyanicatena (as described on the L. cyanicatena species page, in Peeters & De Greef, 2015 and below) due to their similar morphology.

Peeters & De Greef (2015) - Chain behaviour in L. cyanicatena functions for the collective transport of large millipedes. This bluish species is a swarm raider with a small range of prey: millipedes belonging to four orders, and occasional earthworms. Small prey were carried individually or dragged by a few ants, while chains made it possible to move millipedes weighing up to 16.4 g. Chains (either linear or branched) changed according to obstacles along the way to the nests. Between 2 and 52 workers were observed to drag single prey items, with only a few ants directly grasping the prey. One 15-cm-long millipede was captured rodeo-style after being encircled by 25–30 ants. As it uncurled from a defensive coil, the ants held back except one that tried to sting between its legs. The millipede started thrashing about which caused many ants to attempt stinging. 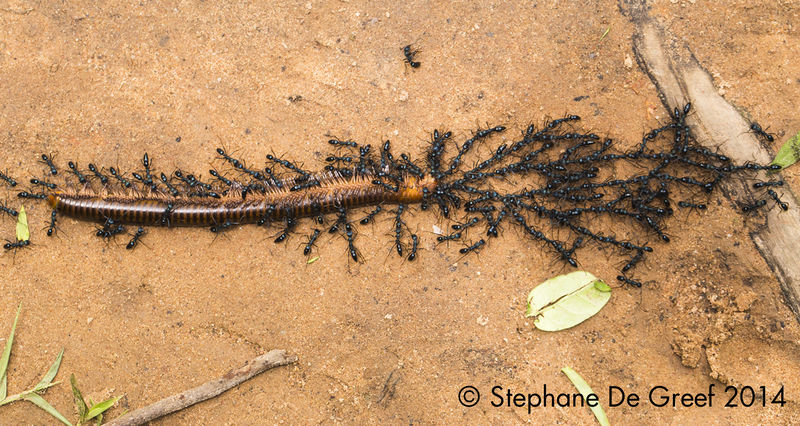 Many species of Leptogenys with large workers occur in Africa and the Neotropics (Bolton 1975; Lattke 2011), while large millipedes are also distributed on these continents. Yet chain behavior has never been reported outside SE Asia, suggesting that its evolution requires a complex combination of traits (Peeters & De Greef 2015). Four other ponerine genera hunt millipedes solitarily, but chains are not used.

Arimoto and Yamane (2018) - Mayr (1872) recorded Lobopelta iridescens (Smith, 1858) from Borneo; however, the specimen had been misidentified. This species was described as Lobopelta chalybaea Emery 1887 from Sarawak, Malaysia. Subsequently, it has been treated as Leptogenys chalybaea, after which Lobopelta was synonymized with Leptogenys (Bolton, 1995). Leptogenys chalybaea has also been recorded from Thailand (Jaitrong and Nabhitabhata, 2005), but that specimen was also misidentified. The Thailand species closely resembles Leptogenys chalybaea; however, they can be distinguished by the configuration of the mandible and eye, clypeus, and body sculpture (see notes for Leptogenys cyanicatena). Therefore, we determined that the Thailand species remains undescribed