Delsinne et al. (2015) - The type series was found by visual search in a 15×15×15 cm soil core inspected for ants during 20 person-minutes (the soil content was examined over a white plastic board using a headlamp to facilitate ant detection), which suggests subterranean habits as observed in other Leptanilloides species. The habitat is a relatively well-preserved evergreen lower montane forest. Soil texture is clay loam; proportion of sand, silt and clay is 44%, 22%, and 35%, respectively; mean pH = 4 ± 0.2 SD (n = 24 soil samples).

Delsinne et al. (2015) - A member of the Leptanilloides biconstrictus species-group. It can be distinguished from other species of this group by the combination of the following characters: masticatory margin of mandible feebly dentate, with teeth extremely minute, blunt and irregularly shaped (Fig. 3A - see Figure 3 below); lateroclypeal tooth present (difficult to observe in stereo microscopy even at high magnification due to the small size of the species but obvious in SEM; Fig 3A); head with piligerous foveolae separated by smooth interspaces equaling 2–3 diameters; reticulation on mesopleuron, metapleuron and lateral side of petiole superficial and interrupted; flange over metapleural gland opening conspicuous and sharply pointed posteriorly, resulting in a projection which surpasses propodeum declivity margin in lateral view (Fig. 3B); petiole slender in dorsal view, 52 ≤ PI ≤ 63 (Fig. 3D); and subpetiolar process straight (not distinctly bulging), with a rounded projection anteriorly (Fig. 3C).

Known only from the type locality.

With the characters typical of the genus (see diagnosis and description in Brandão et al. 1999 and Borowiec & Longino 2011) and of the L. biconstricta species-group (see diagnosis of the group above). Other characters or differences are as follows: 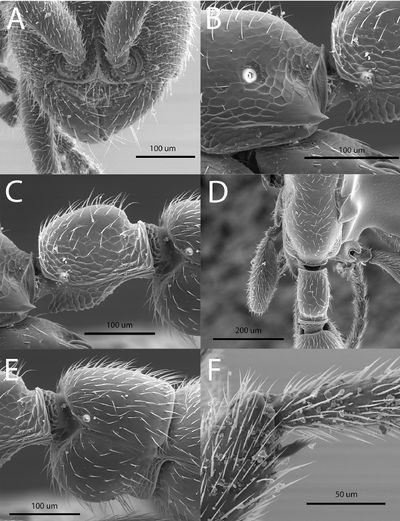 Mesosoma. Flange over metapleural gland opening conspicuous and sharply pointed posteriorly, forming a projection which surpasses propodeum declivity margin (Fig. 3B). Femur not conspicuously enlarged, relatively slender. Midtibia with one short (i.e., half size of foretibia strigil), pectinate spur (Fig. 3F), although pectination may be difficult to observe even at high magnification. Hindtibia with one broadly pectinate spur roughly as long as strigil. Metatibial gland absent or very reduced and not visible even in SEM.

Name in apposition which refers to the Copalinga Private Reserve, the type locality, in honour of its owners Catherine Vits and Boudewijn de Roover to acknowledge their efforts for the conservation of Ecuadorian biodiversity.