Known from a few collections, the most recent of which were from subterranean pitfall traps.

Ogata et. al. (1995) - The simple clypeus with shallow median incision in the anterior margin also occurs in Leptanilla oceanica from the Ogasawara Islands and Leptanilla vaucheri from Morocco. But this new species is separable by the combination of the characters of 3 teeth on the mandibles, the less-produced median portion of the clypeus, the subglobular petiole, the globular postpetiole and the anteriorly narrowed first gastral segment.

Ogata et. al. (1995) – A colony was found in clay soil about 15 cm in depth by a roadside cutting. In the nest many larvae were found feeding on a geophilomorph centipede, which was identified as Mecistocephalus sp. through the courtesy of K. Shinohara. The larvae put their heads into the body of the centipede via its pleura. Although the posterior half of the centipede’s body had been consumed by the larvae, the total length was estimated about 4cm based on its head size (Shinohara, pers. comm.). In the laboratory colonies of Leptanilla japonica, Masuko (1990) also observed that the ant preferably hunted and consumed geophilomorph centipedes. These field and laboratory observations suggest that Leptanilla is specialized on this group of centipedes. 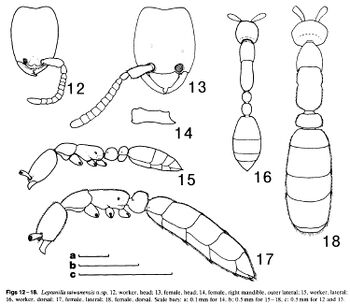 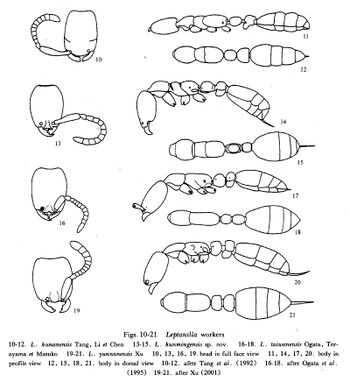 Head subrectangular with sides less convex than those of worker; posterior margin concave in the middle; posterior corners rounded; anterior portion not so narrowed as in worker. Mandibles robust, with narrow masticatory margin armed with blunt basal tooth and acute apical tooth. Anterior margin of clypeus broadly rounded without incision. Antennal insertions like those of worker. Antennae 12-segmented; scape stout, pedicel distinguished from the rest of funicular segments by constriction; antennal segments 3-11 each broader than long; apical segment almost as long as two preceding segments together. Eyes and ocelli absent. Two small red spots present on dorsal surface of head through integument, which may be mandibular glands.