Leptanilla hypodracos was collected from a well-shaded patch of tropical low-lying old secondary forest with a high density of leaf litter and woody debris onthe forest floor. As with other Leptanillinae, L. hypodracos presents a hypogaeic lifestyle and was collected in a baited subterranean pitfall trap at a depth between 10–15 cm. Colony size and structure is unknown. Although the specimens were collected in a trap containing tuna bait, it is presently unclear as to whether L. hypodracos were recruited to the bait, since other Leptanilla species have previously been suggested to be specialist predators of geophilomorph centipedes (Masuko 1990) and have yet to demonstrate any scavenging habits.

Wong and Guérnard (2016) - Based on a morphological examination, L. hypodracos is close to several other Leptanilla from the Oriental region, namely Leptanilla escheri, Leptanilla butteli, and Leptanilla thai, but is most similar to Leptanilla clypeata.

Leptanilla hypodracos differs from L. escheri in the anterior margin of the petiole in profile view, which is rounded in L. hypodracos but more angular in L. escheri while in dorsal view, L. hypodracos displays a long and narrow petiole (PI = 47, PPI = 83) that contrasts with the rounded petiole which is as wide as it is long in L. escheri (PI = 87–120, PPI = 117–145). In dorsal view L. hypodracos also has a narrower mesosoma than L. escheri. Furthermore, as records of L. escheri are restricted to southern Indian highlands where the elevation ranges from 1250 to 1775m asl, and L. hypodracos was collected in a tropical lowland forest of Singapore at an elevation of 55m asl, it is conceivable that the two species occupy differing ecological niches.

Similar species reported from the Malay Peninsula include L. butteli from West Malaysia and L. thai from Southern Thailand. However, L. hypodracos is distinguished from these species in having a more rounded petiolar node and a less inflated petiole.

Leptanilla hypodracos presents the most similarities with Leptanilla clypeata from Java, Indonesia, but can be distinguished from the latter by a suite of distinct characteristics. We also provide a new set of complete measurements for L. clypeata (see below). The primary difference is observed in dorsal view and pertains to the shape and size of the petiolar node and postpetiole. In L. hypodracos, the petiolar node is nearly twice longer than wide (PI = 60, PTL = 0.10 mm, PTW = 0.06 mm) and the postpetiole is longer than wide, and also more rounded (PPI = 90, PPL = 0.9 mm, PPW = 0.08 mm). However in L. clypeata, the petiolar node is almost as wide as long (PI = 82, PTL = 0.11 mm, PTW = 0.09 mm in Ito et al. 2001; new measurements PI = 100, PTL = 0.10 mm, PTW = 0.10 mm), while the postpetiole is distinctly wider than long (PPI = 137, PPW = 0.11 mm, PPL = 0.08 mm in Ito et al. 2001; new measurements PPI = 133, PPW = 0.12 mm, PPL = 0.09 mm) contrary to L. hypodracos. Hairs on the posterodorsal subpetiolar process of L. hypodracos are sparser and shorter than in L. clypeata. The posterodorsal corner of the prodeum also more angular in L. hypodracos while being more rounded in L. clypeata. In full-face view, the mandibles of L. hypodracos display a long and well-defined basal tooth, however this character is neither visible in the observed specimen of L. clypeata nor on the figures of Ito et al. (2001, Figures 7A, C).

Wong and Guernard 2016. Figure 2. Head view focusing on the mandibles of Leptanilla clypeata from Java (A) and L. hypodracos from Singapore (Holotype) (B). Photographs are on the same scale. 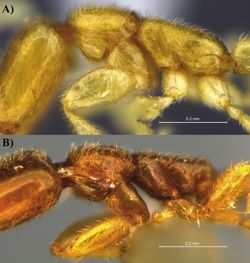 Mandibles with a distinct ridge on their basal margin. Apical tooth large and acute followed by two smaller teeth; with the basal tooth significantly smaller, blunt and pointing inward. Antennal insertion exposed. Antennae with 12 segments. Scape inflated in its median portion, dorsally concave, andextending over the mid-point of head. Pedicel distinct from the scape and flagellum by marked constrictions. Flagellum incrassate with the last antennal segment distinctly longer than the previous flagellomeres, about the size of the previous two segments.

Mesosoma. In lateral view, mesosoma with a continuous straight appearance with the exception of a well-marked interruption of the promesonotal suture. In dorsal view, pronotum wider than posterior portions of mesosoma, especially on its anterior half. In profile view, a distinct sulcus of fine striae separates the pronotum from the propleuron extending from the dorsal portion of the neck and reaching the inferior part of the promesonotal suture just above the coxal junction. In profile view, both anterodorsal and anteroventral parts of pronotum rounded with the latter droplet-shaped. Mesonotum and propodeum with similar width and without obvious inflated portion. Promesonotal suture deeply impressed and clearly visible in both dorsal and profile view. Metapleural gland bulla large and elongate, nearly as large as the maximum width of hind coxa. Posterior part of propodeum forming the propodeal declivity nearly at right angle with rounded edges. 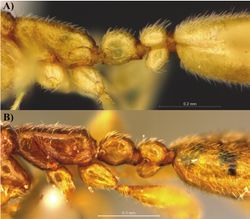 Wong and Guernard 2016. Figure 6. Profile view focusing on the propodeum, petiole and subpetiole of Leptanilla clypeata from Java (A) and Leptanilla hypodracos from Singapore (Holotype) (B). Photographs are on the same scale. 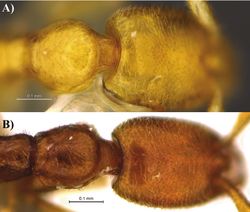 Wong and Guernard 2016. Figure Figure 7. Dorsal view focusing on the pronotum and neck of Leptanilla clypeata from Java (A) and Leptanilla hypodracos from Singapore (Holotype) (B). Photographs are on the same scale.

Sculpture. Sculpture absent on most of the body. Most of the body with a slick and shiny appearance with the exception of the neck with clear transversal striae. Hair insertion on head giving an impression of the presence of small punctuations.

Pubescence. Pubescence present on most of the body, especially on dorsal parts. Antennae and mandibles with numerous erect to suberect long hairs.

Coloration. Head, thorax and fore coxa with a dark amber colour, while petiole, postpetiole and most of the gaster slightly lighter. Antennae, legs (with the exception of the fore coxa) and tip of the gaster with a much lighter yellow coloration.

Holotype. Worker from SINGAPORE, Central Catchment Nature Reserve, 1°21.3'N; 103°48.9'E, ca. 55m asl, 15.VI.2015, via subterranean pitfall trap, leg. Mark K. L. Wong, label “MW150615-1.1” deposited in Lee Kong Chian Natural History Museum. Paratypes. Two workers in total, all with the same data as holotype (deposited at Insect Biodiversity and Biogeography Laboratory), labelled “MW150615-1.2” and “MW150615-1.3”. Unfortunately these specimens were incomplete when collected, with only a head present for one specimen and the second specimen missing part of its antennae and legs. Both specimens were probably damaged by other ants present in the subterranean pitfall trap during collection. The second specimen was very fragile and was damaged during specimen manipulation (breakage at the propodeum/petiole junction). The broken parts were kept in ethanol while the head and mesosoma were mounted for measurements.