Known only from the type collection made in the La Sal mountains in Utah.

Only known from the La Sal Mountains, Utah.

Wing (1968) - Professor Creighton's collection located in the MCZ consisted of 3 specimens of each caste. The date on the specimens was July 1933. Wilson (1955) cites a collection of Lasius fallax made by Creighton at the Warner Ranger Station, Moab, Utah, on July 19, 1933. Because he collected over a wide area during the summer of 1933, it is likely that A. creightoni was taken on or near July 19. Little variation is evident in either metric or conventional characters. The only ecological data is that the Warner Ranger Station is at an altitude of about 4000 feet. Nuptial flights may not have started at the time of collection, since all 3 castes were in the nest; flights may occur sometime in late July or early August. 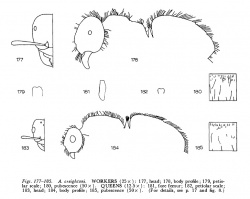 This species is named for the collector, Dr. W. S. Creighton, Emeritus Professor of Biology, City College of New York.