Dolichoderus scabridus is one of the most frequently encountered species within the genus, occurring from north-eastern New South Wales south and west to the Adelaide, South Australia region. It is found in a wide range of forested habitats ranging from mallee and spinifex on sand through dry sclerophyll to wet sclerophyll; they have also been found in pine plantations. Workers forage in columns on the ground, on rotten logs and on tree trunks. Nests occur in rotten branches, logs and stumps on the ground, under bark and in soil under rocks.

Pronotum rounded, lacking spines; propodeum with elongate spines directed upward at angle of 45° or less to horizontal plane, the angle between them at least 90°; dorsum of petiolar node broad, base of propodeal spines forming a "U" with a broad concavity connecting their bases (sometimes this region flat or weakly convex); legs yellowish-red in colour, distinctly lighter than the colour of the body. 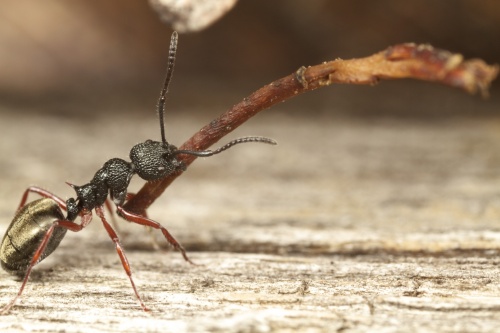 Dolichoderus ruficornis was established as a subspecies of D. scabridus. Its type specimens differ from typical D. scabridus in having the antennal scapes red rather than dark reddish-brown. No other differences could be found between these two forms by Shattuck & Marsden (2013) and given the minor overall differences in antennal colour both forms were considered to belong to a single species. It should be noted, however, that the D. ruficornis form predominates at lower elevations in South Australia although it has also been found in Victoria (a single collection from Greensborough) while the D. scabridus form from South Australia is generally found at higher elevation sites in the Flinders Ranges. Across Victoria and New South Wales the D. scabridus form predominates.

Shining. Head, thorax and node coarsely and irregularly punctate, those on the mesonotum and epinotum larger and more scattered than on the head, finely and densely reticulate between the punctures. Clypeus rugose. Mandibles sparsely punctate. Gaster microscopically punctate.

Hair yellow, short and erect, moderately abundant throughout. Pubescence apparent only on the gaster, where it forms a distinct yellow clothing, but not hiding the sculpture.

Head slightly longer than broad, convex behind and on the sides. Frontal carinae erect, parallel, longer than their distance apart. The anterior border of the clypeus convex, feebly excised in the middle. Eyes globular, placed at the middle of the sides. Scapes extending beyond the occipital border by one-third of their length; first segment of the funiculus twice as long as the second and third. The masticatory border of the mandibles with eight denticles; the terminal border with nine or ten sharp teeth. Thorax twice as long as broad. Pronotum fully one-third broader than long, convex in front and on the sides. Mesonotum circular. Epinotum as long as broad, furnished with two long sharp spines, directed upward, outward and backward; in profile the dorsum convex, the declivity slightly concave, the spines rising at an angle of thirty degrees. Node twice as broad as long, the anterior border straight, the sides and posterior border convex; in profile parallel, the dorsum convex. Gaster concave in front below. Legs long and slender.

Shattuck and Marsden (2013) - All specimens very similar with the exception of the antennal scape colour, which varies from red to dark reddish-brown.

Hair yellow, erect, long and abundant throughout. Pubescence whitish, very fine and adpressed on the antennae and legs, longer and more abundant on the gaster.

Head longer than broad, broader behind than in front, the occipital border and sides strongly convex. Frontal carinae short and erect. Clypeus convex above, the anterior border strongly convex, with a feeble excision in the middle. Eyes large and convex, slightly in front of the middle, occupying one-third of the sides. Ocelli large and prominent. Scapes fully three times as long as the first segment of the funiculus and twice as long as the second. Mandibles la.rge and triangular, finely and densely striate, furnished with numerous very fine sharp teeth. Pronotum hardly visible from above. Mesonotum large and convex, without traces of mayrian or parapsidal furrows. Scutellum convex. Epinotum short and broad, convex above; in profile as long as the declivity, the latter descending at an obtuse angle. Node thick, twice as broad as long, the anterior face and dorsum concave, the posterior face convex. Gaster longer than broad. Cerci very long and thick. Genitalia partly retracted, the outer and middle processes long and slender, strongly curved downward. Legs long and slender. Wings subhyaline, with a slight smoky tinge.