Chelaner rubriceps is a very adaptable species, and can nest either in the ground or in vegetation. B. B. Lowery found a nest in a hollow twig in Ourimbah State Forest (label data). Brown (1958) comments that nests of rubriceps rubrum have been found under the loose bark of eucalyptus, and nests of rubriceps cinctum in volcanic rocks near Lake Purrumbete (Victoria). The latter were harvesting seeds. Label data also indicate that C. rubriceps may occasionally be a pest: a series from Melbourne was found damaging Telecom cable junctions (Heterick 2001).

Heterick (2001) - A member of the rubriceps group. Much of the morphological and colour variation in C. rubriceps occurs in populations from the central and northern coasts of New South Wales. South Australian and western Victorian C. rubriceps are relatively uniform in colour, and usually have a thinner petiolar node than ants from populations further east and north. A variant with a dark red or even piceous alitrunk and nodes, is more common further north; typical localities include Kingscliff, Brunswick Heads and the Myall Lakes. The Myall Lakes material is interesting in that intermediates between the light and dark C. rubriceps occur. Most Queensland material also belongs to this dark C. rubriceps variant.

Specimens with one or more yellow gastral bands have been collected from a variety of localities from the New South Wales border to as far south as Melbourne, Victoria. Ants with uniform brown or chocolate colouration have come from several centres in the Blue Mountains, west of Sydney.

Apart from colouration, there is little variation overall, though specimens within nest series often differ in size without exhibiting polymorphic traits. Significant differences between colour forms for characters such as cephalic and scape indices, or in patterns of sculpturing, have not been found. Males from Victoria, New South Wales, the Australian Capital Territory, and Norfolk Island possess a brush of setae on the third and fourth gastral sternites, and this may well prove to be a species-specific character. This feature is only lacking on a single series of three male ants from Canberra, and they exhibit other anomalies (e.g. the possession of a high petiolar node), although clearly they belong to the C. rubriceps species-complex. The species may well be adventive to Norfolk Island, having arrived there by rafting or on air currents, or (more probably) in materials transported by settlers. Brown (1958) lists C. rubriceps rubrum and C. rubriceps cinctum among ants that have been intercepted at New Zealand ports. Brown thought they probably came on imported poles.

I was unable to obtain the holotype of C. rubriceps extreminigrum. Forel distinguished this taxon from C. rubriceps on the basis of the low, thick nodes and shorter propodeal denticles. He found the taxon difficult to separate from Chelaner kiliani and Chelaner gilberti. The type worker came from Cedar Creek in Queensland. In Queensland there are several localities named “Cedar Ck”, but the only population centre is the Cedar Creek near Mount Glorious, in southeast Queensland. If this is the locality mentioned, there is no question of confusion with C. gilberti, which is found only in northeast Queensland. Moreover, the black head and red alitrunk separate this form from any of the C. kilianii or Chelaner tambourinensis populations examined, as does the presence of propodeal denticles. Nonetheless, because of the brief description, and lack of any material that can be assigned to this taxon, I consider it safer to leave the name as it stands.

Heterick (2001) - Chelaner rubriceps is restricted to the humid east coast and to inshore and offshore islands, including Norfolk Island. On the mainland, the species can be found from the western side of Spencer's Gulf in South Australia, to Magnetic Island in North Queensland. However, few samples have been collected north of the New South Wales Queensland border, and the ant appears to be absent inland from the Great Dividing Range. 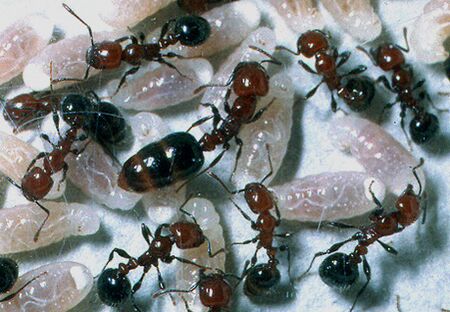 Chelaner rubriceps shows queen polymorphism (Buschinger 2011, Tulloch 1930, Wheeler 1917). Field colonies collected and studied in NSW always yielded one egg-laying ergatoid queen. In laboratory culture such colonies produced only workers, ergatoid queens ("intermorphs") and males. After the original ergatoid queen had died, the colonies reared a few alate queens ("gynomorphs") from the remaining larvae. The species had been identified as Chelaner rubriceps by Brian Heterick (in litt.).

General characters. Extremely variable in colour, even within nest series: typical or distinctive morphs include the following: (1) Monomorium rubriceps cinctum, head brown, or brown with areas of orange on frons and around mandibles, mandibles, alitrunk, petiole and postpetiole tawny orange, gaster bright yellow basaly, rest of gaster with one or more transverse dark brown bands; (2) M. rubriceps rubrum, as for (1), but with a bright orange head and alitrunk; (3) Monomorium sanguinolentum, as for 1, but with head darker, and gaster without a yellow basal region or lighter bands; (4) a colour morph with head tawny yellow, alitrunk, petiole, postpetiole and appendages dark brown or chocolate; (5) morph as for (4) but with anterior promesonotum yellowish orange; (6) a series from the Australian Capital Territory, head dark chocolate, alitrunk, petiole and postpetiole gamboge, gaster as for (1), appendages dark brown: there are many other colour patterns that interconnect with these more distinctive morphs. Worker caste monomorphic but variable in size, with series of intercastes between largest and smallest workers (monophasic allometry).

Petiole and postpetiole. Petiolar spiracle lateral and in anterior sector of petiolar node. Petiolar node cuneate, dorsally rounded, or tumular and inclined posteriad; sculpture absent, petiolar node smooth and shining. Ratio of greatest node breadth (viewed from front) to greatest node width (viewed in profile) near 2:1 to near 4:3. Anteroventral process always absent or vestigial. Height ratio of petiole to postpetiole near 1:1; height-length ratio of postpetiole near 2:1 to near 4:3. Sculpture absent on dorsum, at least: postpetiole smooth and shining; ventral process present and distinct.

Head. Head width-mesoscutal width ratio near 1:1. Compound eyes protuberant and elliptical; (viewed laterally) compound eyes set posterior of the midline of head capsule; ocelli not turreted. Ratio of length of first funicular segment of antenna to length of second funicular segment near 2:5 to near 1:2. Maximum number of mandibular teeth and denticles: four.