Aphaenogaster treatae, unlike many of its North American congeners, is typically found in open habitats such as fields and pine barrens. In Florida it occurs in sandy uplands. It is often difficult to find even where it is known to occur (Deyrup, 2016).

Note flat lobes at the inner bases of each antennal scape.

Deyrup (2016) - This is a large species resembling Aphaenogaster ashmeadi. Both species have a conspicuous lobe at the base of the antennal scape; this might serve to protect the joint at the base of the antennae, but if this is the case, one might expect to see the structure in more species of ants. In treatae, this lobe is thickened, with a distinct lateral face, while in ashmeadi the lobe is thin, although it may look thicker from some angles because its dorsal surface is convex. In peninsular Florida, treatae is reddish brown, while ashmeadi is blackish, but in the Panhandle, both species may be reddish brown.

Deyrup (2016) - A. treatae occurs from Ontario south into Florida, west into Michigan, Oklahoma and Texas. In Florida, treatae occurs in sandy uplands from Collier County northward and west through the Panhandle, although there are many large gaps in this distribution. This species is often difficult to find even where it is known to occur.

This species nests between clumps of grass in sandy, semi-open areas.

Deyrup (2016) - The following paragraph is summarized from Carroll (1975). Nests are in well-drained sandy soil, generally in open stands of pines and oaks. In Florida, the nest entrances are usually at the base of a clump of grasses or herbs, while in northern parts of its range, treatae is often associated with rocks or logs. Nests have one or two entrances, one of which is usually marked by a small turret of plant debris. Nests go down to approximately 45 cm, with pupae and prepupae in a superficial chamber and larvae in deeper chambers. Foraging is on the surface of the ground, always in open to partially shaded areas. Workers commonly collect arthropods, occasionally collect seeds and bits of Russula mushrooms. Alates are in nests from mid-May through mid-July. Florida colonies usually have approximately 200 workers.

In Michigan, treatae was studied in detail by Talbot (1954, 1966). Nests often had a chamber that was mostly above ground and roofed with a thatch of plant material and soil, presumably for warming pupae or prepupae when the soil temperature was cool. Talbot made a complete inventory of the individuals in 30 nests. Numbers of workers ranged from 65 to 1662, with an average of 682. The locations of nests were also plotted in a sandy, abandoned field. In a study plot 100 feet by 120 feet, there were 63 colonies, providing an average of 32 workers that might forage over every square yard. Alates fly under precisely controlled conditions, when the temperature is 78°F-88°F, the air is calm, the sun is partly or completely obscured by clouds, but the ambient light remains relatively high and there is no rain (Talbot 1966). Alates sometimes wait in the nest entrance and rush out as soon as a cloud obscures the sun. In North Carolina, Carter (1962) found treatae common throughout the state, living primarily in fields and in open forests, and only rarely in closed, mesic forests.

Note: A specimen (BMNH(E)1013809; CASENT0900414) in The Natural History Museum from Woods Hole, Massachusetts is labelled as a "cotype" but is not a true type as it is not from the type locality.

The subspecies A. treatae pluteicornis has been described for the population occurring from Alabama into Texas; the two intergrade in Alabama (Creighton 1950), and there is no reason to believe that this subspecies is actually a separate species (Deyrup, 2016). 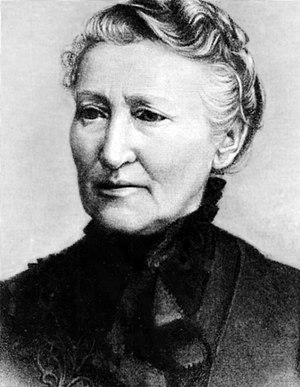 Mary Treat (1830-1923) was an important self-taught scientist who wrote several books on natural history, including one on butterflies, her work often being published in popular magazines rather than scientific journals. In January, 1879, she published an extensive account of a colony of a slave-making Formica, with detailed descriptions of raids and some preliminary experimental manipulations. Lacking scientific credentials, and perhaps primarily interested in stimulating general interest in the natural history of ants, Treat published her paper in Harper's Monthly Magazine. Treat's observations are still useful and raise some interesting questions, assuming the account is accurate. There are plenty of startling anthropomorphisms, as one might expect for the time, considering that the first volumes of Fabre's Souvenirs Entomologiques (which mark the beginning of our modern understanding of insect behavior) were also published in 1879. Her work was noted by Charles Darwin in his book on insectivorous plants, and the two exchanged letters on the subject. Many of her studies were done in her yard and garden in New Jersey, or in the nearby Jersey Pine Barrens. A patient, intelligent, original observer and excellent writer, she might have been an academic star if she had been born at a time or place when there was less disparagement of what was called "the female intellect." (Deyrup, 2016)