Anochetus maryatiae easy to distinguish from its closely related species, Anochetus tua due to its reticulate pronotum. Moreover, A. maryatiae is lighter in colour has smaller total length (TL). If we pass A. maryatiae through the key of Brown (1978), we arrive at the risii group. Nevertheless it does not fit any of those species. Anochetus maryatiae is placed within this group (Brown 1978) which includes mandibles each with distinct dorsal and ventral margins, the upper edentate (except for preapical angle), the lower one with small, serial, spaced teeth, or crenulate, or smooth. Intercalary tooth of mandibular apex arises from well beyond midlength of ventral apical tooth. Preapical angle usually well marked. Mesonotal disc with a blunt anterior rim, or none. Petiolar node pointed or narrowly rounded at apex. This group centered in South East Asia extending to the Philippines and mainland New Guinea.

The risii group in Malaysia includes three species (Brown 1978); Anochetus agilis: very slender, elongate, CI < 83; pronotum smooth and shining over at least the large central part of its disc; Anochetus strigatellus: center of vertex extensively striate, the striation extending to within 0.2 mm of the nuchal carina; petiolar apex narrowly rounded or nipple-like, not spiniform; A. tua: size large, combined length of head and closed mandibles (HL+ML) > 2.5 mm; frontal spread over a wide area of the central vertex, pronotum completely sculptured , indefinite rugulosity with shagreening, mostly U or V-like in pattern. Anochetus maryatiae differs from A. agilis, A. strigatellus and A. tua by having a completely reticulate pronotum. 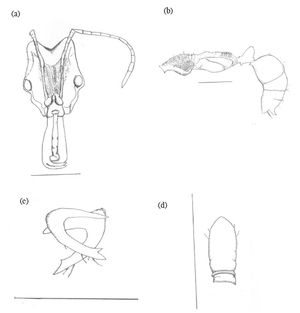 A. maryatiae is derived from the name of Prof. Datin Dr. Maryati Mohamed, an ANeT (International Network for Ant Research in Asia) President, and also for her contributions and expertise as ant taxonomist in Malaysia.