The largest species in the genus, Anochetus hohenbergiae is an arboreal nesting ant.

Anochetus hohenbergiae shares its large size, elongate body and serially dentate mandibles with members of the emarginatus group, a Neotropical species-complex proposed by Brown (1978). This species can be guided to the couplet 3 of Brown’s key (1978: 572) where it is stranded due the petiolar characteristics which do not fit any of the alternatives. In fact, A. hohenbergiae is unlikely to be confounded with any other Anochetus species. This is the largest species in the genus, and the combination of abundant pilosity, posterior margin of head strongly concave, mandibles with a row of 13–16 teeth in the masticatory margin, propodeum unarmed, and petiolar node with a single, reduced apical tooth is unique in the genus. This species shares the exceptionally large body size with Anochetus elegans (TL 12.24–12.51 mm); however A. hohenbergiae is even larger (TL > 12.70) and lacks the pair of blunt petiolar spines of A. elegans.

Anochetus hohenbergiae is known only from three localities in southern state of Bahia, Northeastern Brazil.

Feitosa & Delabie (2012) - Several years ago (1992), three dealate gynes of Anochetus hohenbergiae were collected together at the base of an unidentified epiphyte on a 23 m high tree in the CEPLAC experimental areas at Ilheus, suggesting that pleometrotic colony founding may occur (Delabie, pers. obs.). During the following years a single gyne and two workers were collected in the same locality, but no information was obtained on their habits, except that at least one of the workers was collected foraging on the ground in a cocoa plantation.

Recently, a survey of canopy ants in native and introduced trees used to shade cocoa plantations at the same locality and in Una county (67 km S of Ilheus), revealed new specimens, all of them associated with epiphytic bromeliads. Six dealate gynes and two workers were found associated with several individuals belonging to two Bromeliaceae species: Hohenbergia blanchetii (Baker) E. Morren ex Mez, and Hohenbergia sp. At Ilheus, the bromeliads were fixed at 12–16 meters high to a single tree (24 meters high), Erythrina fusca Loureiro (Leguminosae, Fabaceae), an introduced species commonly used to shade cocoa plantations (Delabie et al. 2007). At Una, the ants were found at the base of Hohenbergia spp. on two different native trees, Enterolobium contortisiliquum (Vell.) Morong (Leguminosae, Mimosoideae) and Rollinia laurifolia Schlecht. (Annonaceae), at 14 and 19 meters high (the trees were 21 and 28 meters high, respectively). Each gyne was associated with a single bromeliad, which suggests that they were probably founding colonies.

An astigmatine mite (Acari: Sarcoptiformes: Astigmatina) was found attached to the body of one of the workers. The mite was in the hypopus stage, an heteromorphic deutonymph which is a resistant form that lacks mouthparts, has a closed gut, is highly resistant to environmental stress, and commonly has ventral suckers with which it secures attachment to insects and other animals when searching for suitable sites to achieve its full development. The relationship generally is restricted to phoretic dispersal in that these nymphs lack functional mouthparts (Walter & Krantz 2009).

The scarcity of A. hohenbergiae in collections is in part because colonies are restricted to the canopy of scattered trees in the forest. Given the large size of the individuals and restricted nesting habitat, colonies of this species are probably small (<100 individuals), as common for most Anochetus species.

According to Brown (1978: 560), members of the emarginatus group of Anochetus are arboreal or semiarboreal foragers that often nest in hollow branches or in epiphytes or between palm leaf bases well above ground level. This is also the case with A. hohenbergiae, which probably nest between the lateral leaves of bromeliads or in galleries along the Hohenbergia roots. Nevertheless, there are two species recently described for the group that are known to nest in the ground: A. elegans and A. miserabilis. In spite of shared morphological features, the emarginatus group is quite heterogeneous biologically.

Brown (1978: 553) mentions that ergatoid gynes are fairly common in Anochetus and are probably the only functional queens in some groups, including the emarginatus group. However, current studies report the occurrence of gamergates (reproductive workers) in Anochetus emarginatus (Fabricius 1804) (Chris Starr, in prep.). Longino (2007) suggests that another species in the group, A. striatulus Emery 1890, may also have gamergates, Gonzalez-Campero & Elizalde (2008) described winged gynes of Anochetus miserabilis, a species also placed in the emarginatus group.

DaRocha et al. (2015) studied the diversity of ants found in bromeliads of a single large tree of Erythrina, a common cocoa shade tree, at an agricultural research center in Ilhéus, Brazil. Forty-seven species of ants were found in 36 of 52 the bromeliads examined. Bromeliads with suspended soil and those that were larger had higher ant diversity. Anochetus hohenbergiae was found in 5 different bromeliads but was associated with twigs and bark cavities, rather than suspended soil or litter, of the plants. 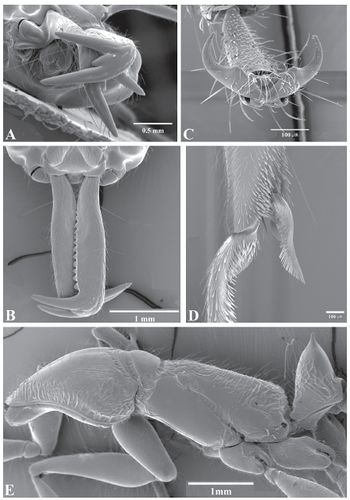 The holotype worker of A. hohenbergiae lacks the tibia and tarsus of the left mid- and hind legs, and of the right mid leg.

The specific epithet is a reference to the observed association of this species with epiphytes of the genus Hohenbergia Schult.f. (Bromeliaceae: Bromelioideae).