Fernández (2007) - Types from this species were not examined. Wheeler (1942:203) stated that the A. septemarticulatus female is “smaller and paler” than that of Allomerus octoarticulatus. The studied female matches in this aspect, that is why this material is probably conspecific with that studied by Mayr in the original description.

If the interpretation above is correct, A. septemarticulatus is not only characterized by the possession of 7 antennal segments (one specimen has 6 segments), but by the mesosomal profile, with its short propodeum and a weak angulation between posterior and basal faces. The sides of the propodeum (basal face) are defined laterally. The medial clypeal hair is evident and clearly protrudes between the others, which are very short. A specimen (Fazenda Porto Alegre, Manaus, Brazil) has 6 segmented antennae, but in its general morphology corresponds to the concept of A. septemarticulatus.

The queen is very different from typical queens that belong to the genus in being smaller, yellow colored and having large black eyes. 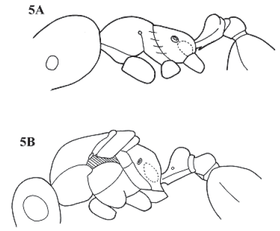 In specimen observed, both antennae with 9 segments. Smaller and paler than typical Allomerus queens. Eyes very large, filling most of head in lateral view. Most of anterior part of head, especially between eyes and frontal carinae with fi ne longitudinal rugulae, as well as posterior part of mesoscutum and all of scutellum. Sides of propodeum, below propodeal spiracle, with longitudinal rugulae. Eyes and ocelli black, contrasting sharply with the yellowish, pale body. Hairs golden.