Nests in dead aerial twigs. Colonies are monogynous, with an ergatoid queen and <50 workers 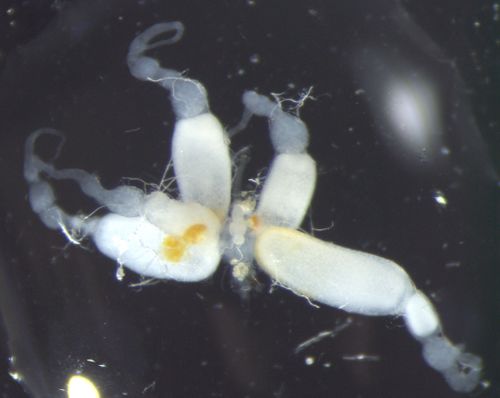 Mandibles delicately longitudinally striate to almost smooth. Frontal carinae sharply developed as a pair of raised ridges which are set quite close together on the dorsum and which are almost parallel, only very slightly divergent and feebly sinuate along their lengths. Posteriorly each carina angles sharply outwards, running towards the sides of the head as a weak ridge or row of linked tubercles. The frontal carinae and their transverse posterior extensions form the borders of a weakly defined and shallowly impressed scrobal area on each side. Eyes flat to extremely feebly convex, not prominent, maximum diameter 0.26-0.30, about 0.22-0.24 x HW. Pronotum in dorsal view marginate anteriorly and laterally, the lateral marginations projecting and overhanging the sides. In dorsal view the pronotal corners sharply angulate to denticulate and the sides distinctly convergent posteriorly. Sides of pronotum without a sharp strong margin running between the anterodorsal and the anteroventral corners. Mesonotum marginate laterally; propodeum with sides separated from dorsum by a blunt angle. Promesonotal suture visible at the sides of the dorsum but usually absent centrally; however, in a few larger workers a faint track is visible arching across the dorsum. Metanotal groove impressed, the propodeal dorsum sloping downwards posteriorly. Propodeum armed with a pair of denticles, a pair of minute blunt tubercles, or unarmed. No two workers of the five seen have the same propodeal armament. Metapleural lobes large and rounded. Petiole node roughly triangular in profile, rising to a point dorsally. In anterior view the dorsum very shallowly impressed and the corners rounded, not projecting as teeth. Dorsum of head strongly longitudinally rugose between the frontal carinae, the rugae quite widely separated and the spaces between them filled with dense fine reticulate-punctulate ground-sculpture. Sides of head between frontal carina and eye with similar dense ground-sculpture. In the upper part of this scrobal area the punctulation is the only sculpture present, but in the lower half it is overlaid by a series of rugae which became stronger closer to the eye; none of these rugae are as strong as those on the dorsum. Sides of head below eye with regular strong, more or less parallel, longitudinal rugae. Pronotal dorsum longitudinally rugose, the rugae becoming finer and less regular away from the midline but present right up to the lateral marginations. Mesonotum similarly sculptured. Propodeal dorsum with a few short rugae anteriorly but these fade out posteriorly leaving only the reticulate-punctate ground-sculpture. Sides of alitrunk with regular more or less parallel longitudinal rugae. Petiole and postpetiole with reticulate-punctulate ground-sculpture, the anterior face of the petiole node only with such sculpture but the posterior face of the node and the dorsum of the postpetiole also with coarse rugose to almost sulcate sculpture. First gastral tergite finely and superficially densely reticulate-punctulate, the base of the tergite also finely longitudinally costulate. All dorsal surfaces of head and body with numerous conspicuous stout hairs which are white to silvery in colour. Dorsal surfaces of middle and hind tibiae with standing hairs, but such hairs absent from leading edges of antennal scapes. Colour black, the appendages brown.