Specimens have been collected in cloud forest and montane evergreen forest.

Longino and and Boudinot (2013) - Knowledge of the biology of the Rhopalothrix isthmica clade of Rhopalothrix is conjectural; a nest has never been recovered and a live specimen never seen. What we know is based on locations and frequencies of capture using various mass-sampling methods. Specimens are known from wet to moderately seasonal forest, from sea level to 2140 m elevation. At higher elevation, they are found in diverse mesophyll forest and in forests with various combinations of Liquidambar and montane oak. In Costa Rica, they are restricted to the wet forests of the Atlantic slope, to 1500 m on the Barva Transect in the Cordillera Volcánica Central and to 800 m in the Cordillera de Tilarán. The genus is unknown from the Monteverde cloud forest at 1500 m, the lowland wet forests of the Osa Peninsula, and the lowland tropical dry forests of Guanacaste, in spite of intensive collecting efforts in these areas. Further north in Central America they can occur at higher elevations.

In quantitative sampling at La Selva Biological Station, in the Atlantic lowlands of Costa Rica, occurrences were relatively more frequent in soil/litter cores than in samples of sifted litter from the soil surface. This suggests that nests are subterranean, with workers only occasionally venturing up into the litter layer. Dealate queens are known for a few species, occurring occasionally in Winkler or Berlese samples. Alate queens of one La Selva species were found in canopy fogging samples, one each in two separate fogging events. Oddly, alate queens have not been found in the many Malaise samples from La Selva. Males remain unknown. 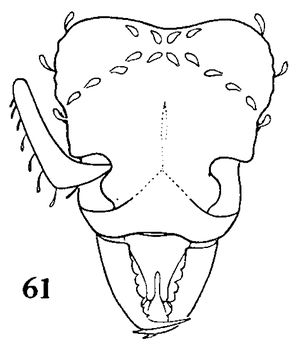 The arch of large hairs from eye to eye is set in a broad and very shallow sulcus. In addition to the large hairs shown in the figure, there are numerous small, appressed squamose hairs covering the dorsum of the head, including the clypeus, labrum, and the upper surfaces of the scapes. Small hairs are present but inconspicuous on the alitrunk dorsum, where a whitish incrustation hides the surface; this also present on dorsum of occipital lobes, center of head and both nodes. Short simple hairs, oblique to reclinate, on mandibles, flexor margins of scapes, gula, legs, and sparse between larger hairs of gaster. Promesonotal suture indicated by a feeble sulcus; metanotal groove deep and abrupt. One erect cochlear hair on each side of mesonotum; one pair of posteriorly-inclined clavate hairs on petiolar node, 6 clavate hairs near posterior edge of postpetiole, and numerous obliquely erect clavate hairs evenly spaced over both surfaces of gaster. Body densely reticulate-punctulate, opaque; gaster and mandibles not quite so densely punctulate, gaster weakly shining of gaster.

The "apical fork" is composed of the long dorsal (subapical) and a slightly shorter ventral (true apical) tooth; between are two small subequal intercalary teeth.