Although this species is known from only a few specimens, three were collected in caves, and one in "Emerald Sink" (a cave about 500 m long) (Ward 1988), so this is probably a cave-dwelling species, although it might be a subterranean species that finds its way into caves.

Proceratium compitale is known only from the type specimens, collected in Val Verde and Terrell Counties, Texas and at an adjacent locality in the Mexican state of Coahuila.

Baroni Urbani and de Andrade (2003) - Head longer than broad, its sides subparallel anteriorly, weakly convex in the middle and strongly converging posteriorly. Vertexal margin convex. Anteromedian part of the clypeus rectangular and strongly protruding anteriorly, dorsally with a marked inverted Y-shaped carina. Frontal carinae subparallel, slightly raised and not very distant from each other. Lateral expansions of the frontal carinae narrow. Head anterolateraliy with a short, longitudinal carina. Genal carina absent. Gular area not impressed. Eyes small and represented by a light pigmented dot under the integument recognisable in the middle of the sides of the head. First funicular joint 1/2 longer than broad. Funicular joints 2-10 longer than broad. Last funicular joint slightly shorter than the sum of joints 8-10. Scapes long and slender, reaching the vertexal margin. Antennal torulus behind the lateral border of the clypeus. Masticatory margin of the mandibles with 5-6 denticles before the pointed apical tooth. Palp formula 4,3.

Mesosorna longer than the head length (mandibles included). Promesopleural and meso-metaplemal sutures impressed ventrally only. Propodeal dorsum between basal and declivous faces slightly concave, weakly carinate, the carina interrupted medially. Each side of the declivous face of the propodeum with a semitransparent lamella, the lamella broader on the posterior half. Propodeal spiracle round and placed over the mid height in lateral view.

Petiole in side view convex on the two posterior thirds, with the sides diverging on the anterior third and convex posteriorly in dorsal view. Anterior border of the petiole gently concave and carinate, the carina weakly denticulate on each side. Ventral process of the petiole lamelliform, triangular and curved backwards. Postpetiole anteriorly as broad as the petiole; its sides gently diverging and weakly convex posteriorly. Postpetiolar sternite anteromedially with a marked triangular projection. Posterior half of the postpetiolar sternite convex. Constriction between postpetiole and first gastral segment impressed. Gastral tergite I gently tumuliform on the curvature.

Legs slender. All tibiae with a pectinate spur. Spurs of fore legs with a basal spine. Fore basitarsi as long as the mid ones. Hind basitarsi about 1/7 shorter than hind tibiae. Second tarsomere of hind leg longer than the pretarsus. Pretarsal claws simple. Arolia absent.

Baroni Urbani and de Andrade (2003) - Differing from the worker in the following details: eyes about 1/7 of the head length and with well defined ommatidia. Ocular pilosity present. Ocelli present.

Mesosoma robust. Scutellum slightly shorter than the basal face of the propodeum; its sides gently converging into a convex posterior border. Metanotum with a small tooth. Propodeal lamellae slightly narrower.

Postpetiole anteriorly slightly broader than the petiole and with gently convex sides. 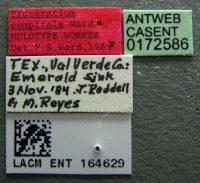