A relatively well studied species (Kugler 1979, Kugler and Hincapié 1983, Kugler 1984) that only occurs in northeastern Columbia.

Pogonomyrmex mayri is a distinctive species that is easily diagnosed by the above characters. Pogonomyrmex naegelii is the only congener known to occur in Colombia.

Pogonomyrmex mayri is only known to occur in northeastern Colombia in the Guajira-Barranquilla Xeric Scrub and Sinú Valley Dry Forest ecoregions as defined by Olson et al. (2001), with one additional record from the Magdalena-Urabá Moist Forests ecoregion. 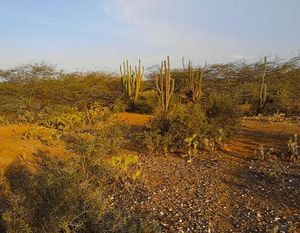 P. mayri appears to be restricted to desert and dry deciduous forest habitats, mostly below 200 m, on the northwestern, western, and possibly southern end of the Sierra Nevada de Santa Marta, but it is also known to occur in more mesic habitats at elevations up to 835 m (Guerrero & Sarmiento, 2010; Kugler, 1979, 1984; Kugler & Hincapie, 1983).

Johnson (2015) - Pogonomyrmex mayri is one of the more well-studied South American species of Pogonomyrmex. This is a phylogenetically basal species in the genus that is most closely related to P. sylvestris-group species (C. S. Moreau & R. A. Johnson, unpub. data).

Nests are typically located in soil at the base of trees or shrubs, or occasionally in cracks at the base of rocky outcrops or high on sandy beaches. Nests have one large (1–3 cm diameter), irregularly-shaped entrance, and the nest is normally covered by dry leaves, a log, or a stone; the nest lacks a crater, mound, or tumulus. Nests contain two to three chambers and range from 15–22 cm deep. Nest density ranges from approximately 50–150/ha; density decreases at elevations >100 m (Kugler & Hincapie, 1983).

Workers of P. mayri are diurnal scavengers that forage on the surface of the leaf litter or bare soil. Diet varies seasonally; more insects (especially termites and isopods) are harvested during the wet season (probably because of increased availability), while flower and leaf fragments are more commonly harvested during the dry season. Dead and dry arthropods comprise >50% of the harvested items in both seasons, but larger insects that struggle are avoided; seeds account for a small portion of the diet (ca. 10%) regardless of season. Colonies are small and consist of from 200–900 workers plus 25–270 larvae and pupae, and up to 28 males. Thus, overall colony size ranges from 284–1020 individuals (Kugler, 1984; Kugler & Hincapie, 1983).

No information is available on timing or location of mating flights or method of colony founding. However, males are relatively common in nest excavations, and they have been collected on vegetation outside the nest in March, April, June, September, October, and November; this suggests that P. mayri has a very different type of mating flight and mating behavior than is known for all congeners. Colonies have one ergatoid queen (known from 2 of 10 excavated colonies). Nothing is known about production of ergatoid queens (Kugler & Hincapie, 1983). Interestingly, ocelli were not visible on either of two examined ergatoid queens indicating that the ocelli are vestigial or absent, and Kugler (1979) did not mention ocelli in his description of the ergatoid queen.

Kugler (1979) - (for each measurement, that of the first specimen is followed by that of the second) Mandibles subtriangular; basal and masticatory borders meet at obtuse angle; outer border gently convex, slightly flattened midlength; masticatory border with 5 teeth increasing in size apically, the second tooth with a denticle on its distal edge (second specimen with denticle reduced on one mandible, absent on the other). Palpal formula 3,3 as determined from undissected specimens; neither palp reaching posterior margin of buccal cavity. Labrum with rounded lobes on either side of a sharp median emargination. Head about as wide as long; in full face dorsal view occiput broadly Vshaped, with distinct occipital lobes; sides of head gently convex on temples to small bulge behind the eye, then indented to flat cheeks. Middle of clypeus weakly convex overall, both transversely and longitudinally; sculpture stops a weak median carina short of reaching apron; apron narrow, leading edge convex with median tooth bracketed by low rounded lobes; lateral arms form low narrowly rounded ridges in front of antennal fossae. Frontal triangle reduced to a narrow, deep Y-shaped sulcus separating clypeus from posterior 3/4 of frontal lobes. Frontal lobes short, well separated; carinae convex. Eyes small, convex, ringed by a round bottom sculptured groove.

Antennae 12-merous. Scape short and rather thick, not reaching vertex of head; bent at a nearly right angle within basal 1/4 of length and largely flat beyond (extensor surface viewed from side). First 2 segments of flagellum longer than wide, L 0.21, 0.20; 0.18, 0.18; segments 3-7 wider than long; segments 8-11 about as long as wide. Apical segment much longer than any other, L 0.34, 0.37; apex narrowly rounded. Last 4 segments constitute a weakly define antennal club. Width of flagellar segments increases uniformly from first (0.13, 0.12) to last (0.18, 0.20). Trunk in full dorsal view with complete, fine, immobile, promesonotal suture; mesonotum bisected at about 2/3 of length by a faint shallow sulcus (probable rernnant of scutoscutellar suture) which drops out at lateral margins; metanotum reduced to a sharp groove between mesonotum and propodeum. Propodeal spines robust, acute, their bases widely separated by a broad concavity. Propodeal spiracles prominent; their orifices circular, facing posterolaterad.

Most of body with fine dense punctulate striae overlain by a coarse broken wavy sculpture: clypeus, top, sides and back of head, trunk (except those areas listed below), petiolar node and postpetiole. In other places the overlying sculpture is much reduced or absent, leaving largely flat surfaces of fine, punctulate striae: gula (some weakly undulate sculpture present), anterior face of pronotum, prosternum, forecoxae, dorsomedial surfaces of metapleural gland bullae, declivous face of propodeum (striae coarser, less dense), most of first gastric segment (striae weaken caudad). Striation much reduced, leaving predominately fine, densely punctate surfaces on: antennae (striae present but finer than elsewhere and not predominate), legs except first coxae, and end of first and most of succeeding segments of gaster (narrow coriaceous margins on each). Mandibles finely longtitudinally striate, without punctures. Inner surface of mandibles, peduncle and venter of petiole smooth and shining; the latter with scattered punctures. Striation more or less longitudinal on mandibles, antennae, clypeus, dorsum and sides of head, mesonoturn, sides of trunk (though much confused in parts), coxae, anterior face and sides of petiolar node, sides and venter of postpetiole, and gaster. Striation essentially transverse on gula (bisected by median longitudinal ridge), pronotum, basal and declivous faces of propodeum (striae converge on apices of spines from all sides), dorsal surface of petiolar node, anterior and dorsal faces of postpetiole (transversely arcuate).

Head remarkably elongate and flattened behind. Clypeus rather long, broadly convex in both dimensions, middle subsiding evenly to sides; free margin broadly arcuate except for slight median flattening or emargination, which possesses in some specimens a very small acute or rounded tooth that is a continuation of a weak median carina running the length of the clypeus. Frontal triangle triangular, with a broad, shallow, V-shaped impression. Frontal carinae reduced to rims encircling the sockets of the antennae. Palpal formula 4, 3. Scape much shorter than combined length of second and third flagellar segments. Scape and flagellum fairly densely covered with short erect hairs; segments 2-12 of flagellum also very densely endowed with fine appressed pilosity.

Sculpture like that of worker and female, with the following exceptions: Striation on head largely transversely arcuate caudad of antennae, clypeus without coarse undulations. Trunk and petiole without overlying broken wavy sculpture; all but pronotum longitudinally striate. Striation on postpetiole gives way to purely punctate sculpture in caudal half. Gaster, first and second antennomeres, and legs smooth and shining, except for weakly striate fore coxae.

Johnson (2015) - This species was named to honor Dr. Gustav Mayr, who erected the genus Pogonomyrmex in 1868.