Plagiolepis alluaudi is a tiny Old World ant that has spread to many parts of the world through human commerce. It is a primarily tropical species, apparently native to Madagascar and neighboring islands. It has become a pest on Pacific islands and in European greenhouses (Wetterer, 2013). Pashaei Rad et al. (2018) found this species in Iran in a low rainfall forest while in Japan it is found in open land (Japanese Ant Image Database).

Plagiolepis alluaudi is a tiny yellow ant (total length 1.5 mm approximately), whose workers have eleven antennal segments. In addition, this ant has a round head with strongly convex posterior margins unlike Plagiolepis exigua (also yellowish), which has an oblong head (Wetterer, 2014; Hernandez-Teixidor et al., 2020).

This ant is primarily a tropical species, native to the Afrotropical region (Guénard et al., 2017). It has been introduced into the Australasian, Indo-Malayan, Neotropical, Oriental and Palaearctic regions (Wetterer, 2014), and has been spread worldwide through human commerce (Wetterer, 2014). In the Canary Islands, Staab (2019) recently reported it for Tenerife, but in our sampling, it was detected in three localities on Gran Canaria, one on La Palma and one on Tenerife (Hernandez-Teixidor et al., 2020).

In Japan, this species is known from the Ogasawara Islands (Shindo, 1979; Masuko & Terayama, 1984), but it has not been recorded from the Nansei Islands (Japanese Ant Image Database).

Check data from AntWeb There is a single record of this species from Catalina Island, California (collected by William M. Mann; SMITH 1957). Many researchers have made extensive ant collections in California, but have never produced another record of P. alluaudi, suggesting that either the California population has been extirpated or the one record was based on a labeling error. In fact, this one record of P. alluaudi is very suspect: I have been unable to find any other records of ants collected by William M. Mann on Catalina Island (Wetterer 2013).

In early 2017, foraging workers and queens of P. alluaudi were observed by TC in the Riverland neighborhood of Fort Lauderdale, Broward County, Florida (about 26.1000 °N, 80.1800 °W). The ants were feeding on the nectar of Zingiber zerumbet (L.) (cv. shampoo ginger) flowers (Zingiberaceae). For more than a decade, Pheidole megacephala was the dominant ant species in this area (T. Chouvenc, personal observation). Over a period of 6 mo, the P. megacephala populations were seemingly displaced by a minute yellow ant, and in addition to foraging for nectar, they were observed tending aphids and feeding on dead insects. In July 2017, a large group of foragers and queens invaded a Riverland household and, in response, we sought its identification. 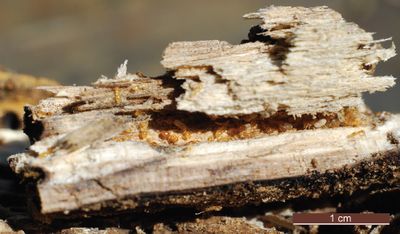 Subsequent surveys within the Riverland area confirmed that P. alluaudi forages in relatively high densities across several residential blocks. Given the infested area, it is possible that it was established for several years before being detected. Nests with brood were readily detected in dead branches of vegetation, both on living trees and on twigs on the soil surface. A partially decomposed section of a tree branch as little as 10 cm long and 2 cm diameter can host several thousand ants, including brood and several queens (Fig. 2). Detailed monitoring will be necessary to determine the current and future range of P. alluaudi in Florida and its effects on local ants and other insects. The establishment of P. alluaudi in an area previously dominated by P. megacephala populations supports Le Breton’s (2003) observation on the interaction of these 2 species in New Caledonia.

The household invasion originated from garden populations entering the structure in a relatively dense trail of workers, and included supernumerary queens foraging openly on the kitchen countertop and feeding on pet food. Three hours after application, baiting with a borate and sugar solution elicited feeding by several dozen queens and thousands of workers within the bait tube. Two days after the installation of the bait tubes, the P. alluaudi activity ceased indoors, while the ants were still active in the garden. Subsequent structural infestations were observed in the weeks following treatment, showing limited impact of the bait on the overall surrounding population.

Outside its native area, this species has been detected in natural areas such as forests, primarily in the Afrotropical region (Wetterer, 2014), as well as indoors in the Palaearctic region (Guénard et al., 2017). Apart from having a short life cycle and a wide tolerance to temperature and humidity, its success in new localities may be due to its ability to co-exist with dominant invasive ants like Pheidole megacephala (Smith, 1957; Wetterer, 2014). It has become a minor household and agricultural pest in some areas, especially in the Pacific islands and in European greenhouses (Wetterer, 2014; Hernandez-Teixidor et al., 2020).