The type specimens were collected from three pitfall samples.

Delsinne et al. (2012) - Its worker morphology places this species within the vezenyii species-group [3]. The worker is a small specimen with longitudinal striae covering the promesonotum and transverse striae on the dorsopropodeum. The clypeal teeth are well defined and sharp. The gyne and male are unknown.

This species is a member of the vezenyii species-group defined principally in having a predominantly smooth and glossy dorsum of the head. It is very similar to the relatively common Oxyepoecus vezenyii, but can be easily distinguished as the promesonotum of O. vezenyii is nearly completely smooth and glossy (the dorsopropodeum of O. vezenyii has transverse striae as in O. striatus).

Oxyepoecus striatus appears most similar to Oxyepoecus browni, which has a similar sculptured promesonotum, short posterior propodeal face, moderately well-developed costulae between the frontal carinae, and a large lobe-like subpetiolar process. Oxyepoecus striatus can be separated as being smaller; the clypeal teeth are well defined, sharp, and directed anteriorly (not lobe-like and directed inward). The frontal lobes are more widely spaced than those of O. browni (separated by 0.11mm) and the head is covered by coarse punctures (except for the smooth medial area). 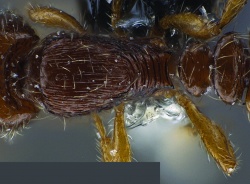 From Latin, stria, referring to the striae covering the dorsum of the mesosoma.