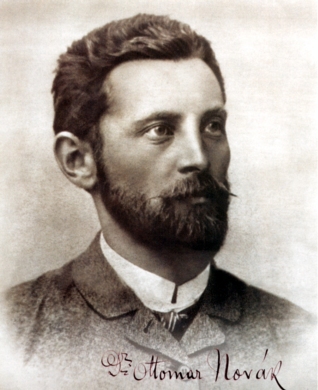 Otomar Pravoslav Smith (in older sources quoted as Ottomar) was born on 16 November 1851 at Hradec Kralove. Science attracted him since childhood, but most of its way to the science of influence Feistmantel uncle Charles (1819-1885), a leading geologist. It is within their professional interest in ancient rocks in central Bohemia, and met with the leading scientists of the time. The first among them was a biologist and geologist Anton Fric (1832-1913) and just Joachim Barrande (1799-1883). In their world, and brought Feistmantel Otomar Novak - and permanently so influenced his future life. But maybe death.

After graduating from high school Otomar Smith graduated medical faculty of Prague University. After he graduated from Faculty of Arts, graduating in 1879. As a student failed fossils and started working for Professor Frič at the Museum of the Kingdom of Bohemia (now the National Museum). Early excelled both in science itself and in the skills that scientists apply: well handled several languages and was a skilled artist.

At this stage of his scientific career with Smith Fričových participated in field studies, and attributed the authorship of some of his drawings in his works. From the age of twenty-one years he began self-publish their own scientific work and in 1873 became a full department assistant Paleontological Museum.

Novak's private life was not happy. We are constantly faced with a lack of money, since most of their salaries assistantships and museum devoted to research, foreign study and to pay for expensive lithographic plates. Work passion, financial difficulties and possibly ongoing pulmonary tuberculosis later contributed to the breakdown of his marriage. (In the last years of his life he lived mostly in the faculty apartment in the charred street.)