This species was only recently found to occur in the United States. Its discovery in southern Arizona raises the possibility that this species, rather than Neivamyrmex melanocephalus, might be the worker caste of Neivamyrmex mandibularis. (Snelling and Snelling 2007)

Watkins and Coody (1986) - The Estacion de Biologia Chamela is a field station of the Instituto de Biologia of the Universidad Nacional Autonoma de Mexico. It has an area of 1400 ha and is located about two km from the Pacific coast in the state of Jalisco, at km 59 on the highway from Barra de Navidad to Puerto Vallarta. The topography is low hills and canyons without permanent streams. Average annual rainfall is 733 mm, and the dry season is from November to mid-June. The dominant vegetation is deciduous tropical forest generally less than 8 m in height.

Army ant colonies are relatively abundant in this area and numerous columns may be seen crossing the station's roads and trails at night. During June. 1984. we observed 36 colonies (10 species) including three colonies of Neivamyrmex graciellae as follows:

Colony No. W-305. Dr. Stephen H. Bullock. resident Investigador Associado called my attention to a swarm of ants on the steps of a sidewalk near the headquarters weather station about 8:00 a.m. on 9 June 1984. Upon examining this “disorganized” swarm, the nonphysogastric queen was discovered running about among several hundred workers including newly eclosed callows. A gardener was watering nearby flower beds and this may have forced the colony to emerge from a subterranean cavity. A small sample of workers and the queen were removed from the swarm and preserved. Two mites were attached to the queen's alitrunk. Columns of workers were observed in this general area for the next two days. While collecting the queen, I (J. F. W.) was stung several times on the hands and arms by the aroused workers. Having previously experienced the very mild stings of several other species of Neivamyrmex, I was greatly surprised by the severity of these strings. I experienced a strong burning sensation similar to that resulting from a fire ant (Solenopsis) sting at each point of insertation around which a welt one to one and one-half centimeters in diameter arose almost immediately. Although the burning sensation disappeared after a few minutes. red patches of skin were still visible after two hours.

Colony No. W-306. A weak raiding column was observed on the station’s paved entrance road about 500 m from the headquarters about 11:00 p.m. on 8 June 1984. The column did not contain callow workers and extended from a small hole near the center of the road and disappeared into a cavity under the edge of the pavement. A few of the workers were carrying captured ant larvae.

Colony No. W-324. A migrating column of workers including numerous newly eclosed callows was discovered about 4:00 a.m. on 17 June 1984. The column, about one cm wide, was crossing the din EJE Central road near the 1.000 m marker. Some workers were carrying their own colony brood of small larvae (about 1.0 mm long), and other workers were carrying ant larvae and pupae captured from other colonies. At 5:20 a.m., a moving “swarm” of workers about one m long and ten cm wide with the nonphysogastric queen running unaided near the middle appeared along the column. The queen and several hundred workers were collected and preserved. Sixteen mites were removed from the queen’s body.

The male caste is unknown.

Shining. Mandibles rather coarsely striate. Head and body sparsely, moderately, coarsely punctate, except on the impressed anterior portion of epinotum and on the meso- and metapleurre which are densely punctate and subopaque.

Fine, elongate, erect yellowish hairs abundant on head, body and appendages, on the gaster mixed with shorter and subappressed hairs. 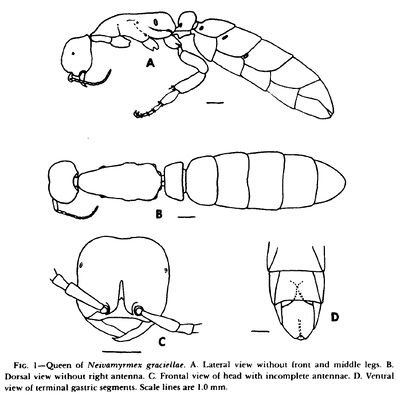 Ototonilco, Jalisco, Mexico. Cotypes.-Cat. No. 29045 U. S. N. M. Described from nine workers taken from a file running through the grass in an orange grove.

Named in honor of Senorita Graciella Mercedes Maderiaga, the child who found them.