DuBois (1986) - (this first paragraph provides distribution details and is a little outdated, as of 2016 it is now known from more locations in 2016) This species is quite rare; it is known from only four localities in Florida. In addition to the type locality, specimens have been collected in Tallahassee, LaCrosse, and Punta Gorda. It is possible that earlier records of Monomorium minimum from Florida (e.g., Van Pelt, 1958) may have represented collections of this species. However, no specimens from these earlier studies could be located. It is more probable earlier records referred to Monomorium viridum which is more common in peninsular Florida, but does not range as far west as Tallahassee. Additional collecting in northern Florida and southern Georgia may elucidate the distribution of M. trageri.

Although details of nesting preferences are unknown (little can be inferred from 4 collections), the colony which yielded the holotype and paratypes was collected from beneath a board in a cow pasture (J. Trager, pers. comm) The colony collected in LaCrosse (Alachua Co.) was collected in cow dung. The type colony was reared in the laboratory from 5 April through 20 June when portions of it were killed. At that time, numerous males and queens were present. One male and queen were preserved in coitu indicating that mating may occur between males and closely related queens. Several Specimens examined are probably intersexes (female head and male alitrunk and gaster). These may have been caused by some form of mechanical damage to the developing individuals (W L. Brown, Jr., pers. comm).

Recently, James Trager provided additional specimens of the Gainesville colony. A few queens are winged, indicating that genes which code for wings are still present within this population; approximately 90 % of the queens are Wingless and 10% are winged. 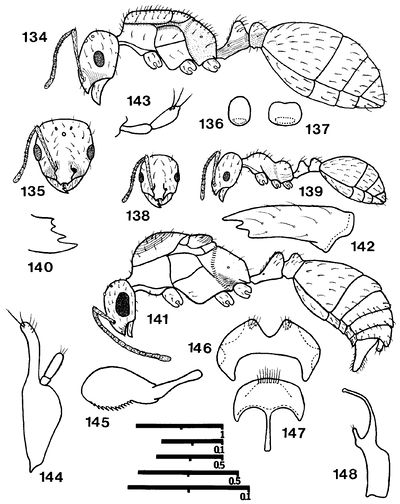 This species is named in honor of James C. Trager, who provided many specimens of it.