Known only from the type male. The specimen was captured in a Malaise trap located in "primary forest."

Petersen (1968) - This new species is readily differentiated from all known male-based species of Leptanillinae by the shape of the genitalia and less obviously, by the wing venation. In other features it is principally very similar to other species placed in Leptanilla and Plaulomyrma. I have been able to compare it directly with the Leptanilla males described by Santchi (1907, 1908). 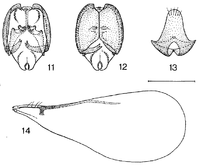 The genitalia of L. astylina deviate from those of the Leptanilla species described by Santchi (figs. 11-13) in the following ways, 1) the gonocoxites do not meet ventrally, 2) the gonostyli are lacking, 3) the volsellar plates are not inflected, but horizontal, medially fused to form a single tongue-shaped structure, 4) the volsellar digiti are not rod-like and largely free, but proximally bifurcated and associated with the aedeagus, and 5) the aedeagus is laterally compressed distally, not forming a flattened shield. On almost the same grounds the new species can readily be separated from Leptanilla javana. It is also clearly different from Leptanilla santschii in the shape of the genitalia, but the absence of gonostyli is common to both species and may indicate some relationship, but even in this case L. astylina deviates to such an extent that it might deserve the erection of a new genus. However, at this state of our knowledge of the leptanillines I have found it premature to create a new genus formally and the species is enclosed in Leptanilla.

The wing venation in L. astylina represents the most reduced state so far found in the Leptanillinae as only one vein is present, the subcosta. Some of the Leptanilla species described by Santchi were said to be veinless, but as shown below this is not true. Compared to the conditions in other Leptanilla species or Phaulomyrma the sub costa of astylina is relatively long and it ends rather abruptly without any tendency to continue in a marginalis. 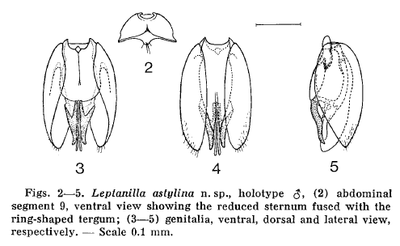 Length without antennae about 1.15 mm., without protruding part of the genitalia about 1 mm.; antennae 0.6 mm.

Colour of the alcohol-preserved specimen light brownish to testaceous. Any kind of conspicuous sculpture lacking. Pilosity also inconspicuous, short semi-erect setae present all over, well spaced, longest on dorsal surfaces and on femora.

Head twice as long as high and almost 1.5 times longer than broad at greatest width just behind the eyes, moderately tapered posteriorly; the concavity of occiput, seen from above, as deep as half the diameter of an ocellus. Eyes hairy, with large facets, semiglobular but hind margin straightened; ratio of longest and shortest diameter about 4:3. Ocelli large, prominent, distance from front ocellus Lo lateral ocelli as long as ocellar diameter, distance between lateral ocelli twice as long. Antennal sockets close to oral aperture leaving only a small space for the frontoclypeal area which is apparently undifferentiated; distance between antennal sockets as long as distance to eyes; a weak parafrontal ridge present laterad of sockets. Mandibles vestigial, about as long as broad, setaceous. Antennae almost as long as head and thorax combined; scape rather swollen, about 2.5 times as long as wide; pedicel pear-shaped, twice as long as wide, one third shorter than scape and clearly wider than proximal joints of flagellum; 1st flagellar joint slightly longer than 2nd, following joints gradually increasing in size distally, about one third longer than wide; terminal joint, however, a little more than 3 times as long as wide and as long as the two preceding joints combined.

Fore wings broken, at least distal one third missing. Venation lacking apart from a weak subcosta, indicated almost solely by a fold bearing a few long setae; subcosta ends rather abruptly; costal cell as long as mesoscutum or the head. Hind wing long and narrow, a little shorter than head and thorax combined.

Abdomen including genitalia a little longer than thorax; genitalia alone almost half as long as abdomen. 2nd (petiole) and 3rd abdominal segment subequal in length, much longer than any of segments 4-7 which are decreasing in length posteriorly. Petiole with rather long anterior stalk, petiolar node simple, subglobular. Sternum 8 very small; tergum 8 very long dorsally, posteriorly extremely thin. Sternal and tergal plates of segments 2-8 separate, but in segment 9 fused (fig. 2). Tergum 9 very thin, obliquely ring-shaped as its lateral parts fuse ventrally; sternum 9 very reduced, rhomb-like; segment 9 as a whole is thus a cup-shaped holder which fits the anterior end of the genitalia and is hidden inside the abdomen.

Genitalia as shown in figs. 3-5. Gonobase not recognizable; gonocoxites large valve-like structures with free margins, well separated both dorsally and ventrally; gonostyli not present. A tongue-shaped, ventral sclerite is interpreted as the medially fused volsellar plates, and two strongly sclerotized, proximally bifurcated rods are regarded as the volsellar digiti; these are closer associated with aedeagus than with volsellae; volsellar cuspi lacking. Distal part of aedeagus strongly laterally compressed, apex reaches just behind gonocoxiles.