These ants are likely more common than one would imagine by the fact they are rarely collected. Discothyrea testacea is a small cryptobiotic ant that occurs in small colonies. Often just a few individuals are found in a group when more than a single individual is located. When an individual is disturbed it will become immobile, effectively playing dead and with this lack of movement can be very difficult to notice. We have little information about their biology but it is suspected they prey upon arthropod eggs. Collections have been made from leaf litter, humus and rotten logs.

Modified from Smith And Wing (1955): Worker funiculus strongly thickened (clavate) toward the apex and the last funicular segment remarkably enlarged, oval and approximately as long as the combined lengths of the preceding funicular segments; the semi-circular, disk-like clypeus extended above the mandibles; extremely minute or almost obsolescent eye; dorsum of thorax without sutures; gaster strongly curved anteroventrally with the apical segments protruding from the venter rather than the apex of the large, second gastric segment; erect hairs lacking from most of the body except usually the apex of the gaster; body unusually small (less than 2 mm.) and with a dull opaque or subopaque cast.

Within the United States there is a some variation in the development of the fused frontal lobes, which may project between the antennal bases as a truncate lamella, or as a slightly tuberculate lamella, or as a lamella whose apical third is strongly projecting. The latter character state appears in several series from western Florida, and the few specimens seen from Arkansas and Oklahoma. There are, however, series showing this character state from north-central Florida where the typical form also occurs, so this variation does not seem to represent a typical geographic dine. We have not been able to find any other distinctive character states that are correlated with the projecting apical third of the lamella; for the moment we are treating specimens with this feature as irregularly occurring variants.

The female is very similar to the worker except for her larger size, possession of wings (when a virgin), and modifications of the head and thorax such as ocelli, compound eyes, and the extra sclerites of the thorax.

The male, which has not been formally described or illustrated, is distinguished by its small size (under 2mm), projecting clypeus, and wing venation, which, like that of the queen, shows a small stigma and a large, complete, apically rounded marginal cell. This combination of venational features is very rare in ants; we know of no other example in the U.S. fauna. As a general rule, with a reduction in size comes an increase in the relative size of the stigma and a reduction in the venation of the distal leading edge of the wing; the marginal cell may be open or lacking. Some small Proceratium, such as Proceratium silaceum, have this conformation of veins, as do many dacetines. It is refreshing to find a male ant that can be instantly recognized by its venation alone. This could theoretically be useful in ant surveys, but it will still be a challenge to pick such a tiny ant out of a light trap or flight trap.

Within the United States this species is found from North Carolina through Florida, west into Oklahoma. Through most of its range it is only known from widely scattered locations, at least in part because this ant is difficult to find, as the colonies are small and the ants themselves are tiny and slow-moving. The species was named in 1863 on the basis of two specimens collected somewhere in "North America," and apparently not seen again until 1948 (Smith and Wing 1954). This helps explain the absence of D. testacea from Creighton's 1950 manual of ants. In Florida, persistent Berlese sampling at any upland or mesic site eventually seems to produce D. testacea, and this could be true through much of its range outside Florida.

In North Carolina (Carter 1962) and in Florida this species occurs in both xeric and mesic habitats, including oak scrub, high pine, flatwoods and temperate hardwood forest. One specimen was found in a tropical hammock in the Florida Keys. The assumption is that this species feeds on the eggs of other arthropods, especially spiders, but this awaits confirmation. A male was found in a small colony in a hollow acorn buried in the leaf litter in Florida scrub habitat.

The following account is from Smith and Wing (1955): In 1863 Roger described a new genus and species of ponerine ant, Discothyrea testacea, on the basis of a worker and dealated female. His generic description was unusually thorough, his specific description extremely brief. Through some unfortunate oversight he failed to designate a specific type locality; however, this was remedied later in 1863 in his "Verzeichniss der Formiciden - Gattungen und Arten," where he gave "Nord Amerika" as the general type locality without further remark.

From 1863 until 1948 no one in this country succeeded in finding additional individuals, and the presence of testacea in North America was becoming a matter of considerable doubt. Such well known works as Wheeler's, 1910 and 1926 editions of "Ants"; Smith's, 1947, "A Generic and Subgeneric Synopsis of the United States Ants, Based on the Workers"; and Creighton’s 1950, "Ants of North America", made no mention of the genus or species. So far as we are aware, no one in North America has ever seen Roger's types. A number of workers, especially beginners, did not know that Discothyrea had ever been recorded for North America, although the species testacea is listed for North America by Emery (1911 in Wytsman's Genera Insectorum. fascicule 118, p. 52). Emery apparently recorded the form from North America entirely on the basis of Roger's original statement.

Not only had our workers failed to find testacea, but even another North American species, Ponera gilva (= Cryptopone gilva) described by Roger in 1863, was not collected again until 1919. The authors do not believe that either species is so rare that it should not have been collected on numerous occasions during this time. Credit for collecting the first Discothyrea since Roger's time, though, should go to the junior author, who found a single worker on August 29, 1948, while collecting from soil humus by means of a Berlese funnel about three miles from Holly Springs (Wake County), North Carolina. Less than a year later (April 29, 1949) H. T. Vanderford found three workers of Discothyrea adhering to the roots of a swamp fern growing on the edge of an old salt marsh lake at Savannah, Georgia. Approximately two months later he collected two additional workers and a dealated female from almost the same spot. 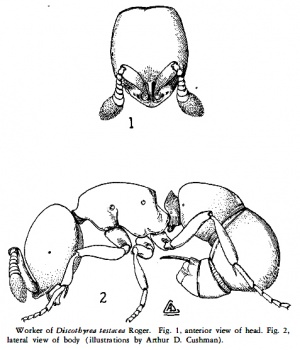 Smith and Wing (1955): Head ovoid, approximately one and one-third times as long as broad (maximum length from the extreme anterior border of the clypeus to the posterior border of the head, 0.46 mm., maximum breadth, eye to eye, 0.34 mm.), with weakly convex sides, rounded posterior corners and almost imperceptibly emarginate posterior border. Compound eye extremely minute, scarcely perceptible, placed on side of head nearer to the base of the mandible than to the posterior border of the head, composed of only a few ommatidia. Antenna 9-segmented, placed near the extreme anterior border of the head; scape short (excluding the pedicel, 0.25 mm. in length), strongly curved and also strongly thickened (clavate) toward the apex; funiculus short and stout, the first segment as long as, or longer than broad, the second through the seventh segments successively widening, each of these being clearly broader than long, the last funicular segment (eighth) extraordinarily large, oval, and approximately as long as the combined lengths of the preceding funicular segments. Clypeus extended over the mandibles as a plate or disk-like process, the anterior edge of which is subangularly arched (from side to side). Frontal carinae fused with the clypeus into an extremely thin, vertical plate, which extends from the anterior border of the clypeus between and also past the antennal insertions, the plate bearing a very small but visible hole (viewed in profile). Mandible subtriangular, the masticatory border bearing several rather indistinct denticuli at the base and a fairly distinct and acute tooth at the apex. In profile, dorsum of the thorax rather evenly and moderately arched (anteroposteriorly), meeting the slightly inclined declivity of the epinotum to form a distinct angle. Thorax, from above, 0.46 mm. in length (from the extreme anterior border of the pronotal collar to the point where the dorsum of the thorax meets the epinotal declivity, widest at the pronotal humeri, narrowest at the epinotal tubercles; the promesonotal and mesoepinotal sutures lacking; pronotal humeri rounded or subangular; dorsum of the thorax meeting the epinotal declivity to form a distinct subangular emargination between the epinotal tubercles. Legs moderately long, the femora and tibiae not especially thickened, the anterior and posterior tibia each with a well developed and distinct spur, the spur apparently lacking on the middle tibia. Petiole, in profile, erect, somewhat wedge-shaped, with the apex of the wedge directed dorsally, ventral border of the petiole with a spine-like lamella; viewed anteriorly, the petiole also appears wedge-shaped, with the highest point of the wedge at about the middle of the dorsal border of the petiole. Gaster from above, 0.63 mm. in length (from the extreme base of the first gastric segment to the extreme apex of the second gastric segment), the first two segments combined form an ellipsoid, the base of which is subtruncate and the apex of which is subangularly rounded; in profile, the much rounded apical segments of the gaster are borne from the venter rather than the apex of the second gastric segment. Extreme apex of gaster with a sting as in other ponerines.

Body light brown or yellowish brown to slightly reddish brown, the color depending largely on the intensity of the light, subopaque or opaque, this also depending upon the light intensity. Eyes blackish.

Smith and Wing (1955): Larger than the worker. Total body length obtained in the same manner as with the worker and comprising the following parts, head 0.50 mm., thorax 0.66 mm., gaster 0.85 mm. Differing from the worker largely in the usual female characters such as the possession of ocelli, compound eyes, and thoracic modifications. Other differences are mandible edentate except for the single apical tooth; eye rather large, oval, approximately 0.13 mm. at its greatest width and bearing in this width 10-12 ommatidia, placed approximately 0.05 mm. from the base of the mandible; anterior ocellus borne less than 0.10 mm. behind a transverse line connecting the posterior border of each eye; compound eyes and borders around the ocelli black; pronotal humeri more angular; epinotal declivity apparently more concave. Color similar to that of the two Georgia workers but more sordid than that of the worker from North Carolina.

Type locality is North America. Smith and Wing (1955) state "very probably collected in one of the Carolinas by Dr. Christian Zimmerman."