Little is known about the bionomics of A. piercei. Nothing is mentioned by Wheeler (1930), however, judging from the hitherto known localities (Negros and Mindanao) (see Wilson 1964) this species inhabits lowland (15-600 m) and is probably restricted to the Philippines. Wilson (1964) cited India, Solon (ca. 1400 m), as a locality of A. piercei, but the identification should be reconfirmed.

A member of the javanus species group. This species is most similar to Aenictus duengkaei (see under A. duengkaei for differences).

Little is known about the biology of Aenictus piercei. The genus is comprised of species that live an army ant lifestyle. Aenictus typically prey on other ants, from other genera, or other insects such as wasps or termites. There are reports of Aenictus preying on other insects as well and even have been observed collecting honeydew from homopterans (Santschi, 1933; Gotwald, 1995) but this appears, at least from available evidence, to be uncommon. Foraging raids can occur day or night across the ground surface. Occasionally raids are arboreal. During a raid numerous workers attack a single nest or small area, with several workers coordinating their efforts to carry large prey items back to the nest or bivouac. Aenictus have a nomadic life style, alternating between a migratory phase in which nests are temporary bivouacs in sheltered places above the ground and a stationary phase where semi-permanent underground nests are formed. During the nomadic phase bivouacs move regularly, sometimes more than once a day when larvae require large amounts of food. Individual nests usually contain up to several thousand workers, although nest fragments containing only a few hundred workers are often encountered. Queens are highly specialised and look less like workers than in most ant species. They have greatly enlarged gasters (dichthadiform) and remain flightless throughout their life. New colonies are formed by the division of existing colonies (fission) rather than by individual queens starting colonies on their own. 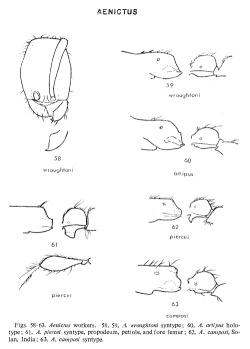 Head in full-face view slightly longer than broad, subrectangular, with sides feebly convex and posterior margin almost straight; seen in profile occipital corner of head rounded. Antennal scape reaching midlength of head; antennal segment II longer and narrower than each of III–VI; terminal segment almost as long as VII+VIII+IX and 1.9 times as long as broad. Anterior margin of clypeus bearing 9-10 denticles (this observation is based on the single non-type worker, since in the lectotype mouth parts are buried in glue and the head of the paralectotype was missing). Masticatory margin of mandible with 3 acute teeth including large apical tooth; basal margin lacking denticles. Promesonotum in profile almost flat dorsally; in profile propodeum almost flat dorsally; propodeal junction angulate, right-angled; declivity of propodeum nearly flat, with blunt lateral carinae, but not demarcated basally by a transverse carina. Petiole almost as long as high, its dorsal outline convex; subpetiolar process well developed, subrectangular, its ventral margin slightly convex and longer than posterior margin; postpetiole almost as long as petiole.

Jaitrong & Yamane (2012) - Two syntype workers on a pin, the Philippines, Negros, Cadiz, 2.VI.1924, leg. Dr. Pierce (Museum of Comparative Zoology, examined). The worker located below on the pin is selected as the lectotype.