No direct biological information is available. The type series was collected in a single pitfall trap in a secondary mixed evergreen broad-leaved forest. Thus, the species probably lives and forages on and in the leaf-litter preying on small ants of the subfamily Formicinae, as it has been previously reported for species in the A. wroughtonii group (Rościszewski and Maschwitz 1994, Jaitrong et al. 2010). Possible prey species of the genera Prenolepis and Nylanderia are common at the type locality (Staab, 2014).

Stabb (2014) - Aenictus gutianshanensis can be easily distinguished from all other species of the wroughtonii group by the pronotum, the petiole, and the side of the postpetiole completely finely reticulate. The new species is most similar to Aenictus vieti and Aenictus camposi but slightly larger in all measurements. In addition to having the pronotum and petiole completely finely reticulate, A. gutianshanensis can be easily distinguished from A. vieti and A. camposi by the following characters (characters for A. vieti and A. camposi are given in brackets): ventral margin of subpetiolar process almost straight (ventral margin convex), femora densely punctate (smooth and shiny in Jaitrong et al. 2010, but superficially and irregularly sculptured and shiny in two paratypes examined by the reviewer), postpetiolar process more developed with a rim below (less developed, without ventral rim), and longest standing hairs on pronotal dorsum distinctly longer (maximal 0.13 mm). 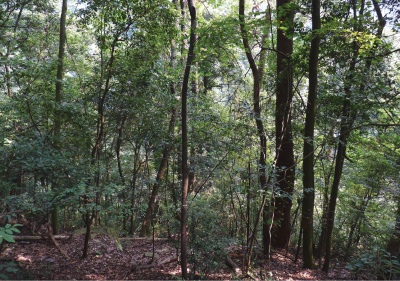 Little is known about the biology of Aenictus gutianshanensis. The genus is comprised of species that live an army ant lifestyle. Aenictus typically prey on other ants, from other genera, or other insects such as wasps or termites. There are reports of Aenictus preying on other insects as well and even have been observed collecting honeydew from homopterans (Santschi, 1933; Gotwald, 1995) but this appears, at least from available evidence, to be uncommon. Foraging raids can occur day or night across the ground surface. Occasionally raids are arboreal. During a raid numerous workers attack a single nest or small area, with several workers coordinating their efforts to carry large prey items back to the nest or bivouac. Aenictus have a nomadic life style, alternating between a migratory phase in which nests are temporary bivouacs in sheltered places above the ground and a stationary phase where semi-permanent underground nests are formed. During the nomadic phase bivouacs move regularly, sometimes more than once a day when larvae require large amounts of food. Individual nests usually contain up to several thousand workers, although nest fragments containing only a few hundred workers are often encountered. Queens are highly specialised and look less like workers than in most ant species. They have greatly enlarged gasters (dichthadiform) and remain flightless throughout their life. New colonies are formed by the division of existing colonies (fission) rather than by individual queens starting colonies on their own.

The scientific name is after the type locality, the Gutianshan National Nature Reserve in South-East China.