This species is probably a column raider and was found collecting immatures of a Pheidole species in coastal scrub and grassland habitat. 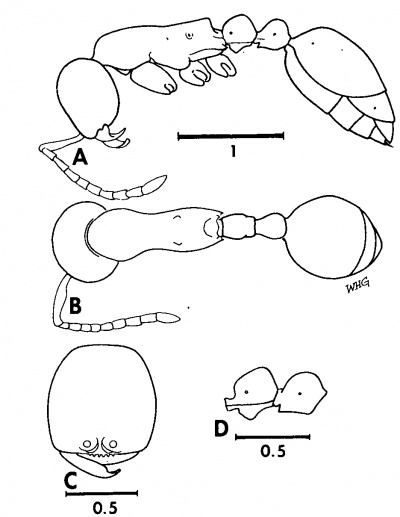 Campione et al. (1983) - Behavioral observations on A. asantei were published previously (Gotwald 1976). The species (species A in Gotwald [1976]) was observed on four occasions (colonies GC-027, GC-035, GC-037, GC-047) in coastal scrub and grassland at Legon, Ghana, and once (colony GC-049) crossing a path between plots of cocoa, Theobroma cacao L., in the moist, semideciduous forest re­gion at Jukwa, Ghana. All five colonies were collected in heavily cultivated habitats. The four colonies found at began, the type-locality, were in columns moving near or in plots planted with cassava, Manihot esculenta Crantz, in the University of Ghana farm system.

A. asantei is probably a column raider (a column raid consists of a system of branching columns that usually terminate in small groups of advancing workers engaged in foraging activities), although on two occasions (colonies GC-035 and GC-037) the workers were traveling in a series of anastomosing columns that merged to form a single base column, reminiscent of the swarm raiding patterns of the driver ants of the army ant genus Doryus. In these two cases, the workers were traveling unidirectionally toward the base column, presumably toward the colony nest. The base columns varied from one to four workers in width, and some workers in each carried prey. Each trunk column entered a hole in the soil. The column of colony GC-037 was lined on both sides with clustered workers for the last 10 cm before the column made its subterranean descent. Colonies GC-027 and GC-049 were each observed as columns consisting of a single file of workers. The prey collected from colony GC-037 consisted of immature forms of the ant Pheidole sp. and included 24 worker pupae and 3 larvae. Although colony GC-047 was emigrating, several workers carried prey, all adults of Pheidole. The prey items included one queen, two workers, three worker heads, and one mesosoma.

The emigrating column of colony GC-047 was discovered at 0950 h. A detailed description of the emigration can be found in Gotwald (1976).

This species is named for the Asante people of Ghana.