There are few details known about the biology of this northern Australian species. Wilson (1964) discussed the biology and taxonomy of this and related species (under the single name A. aratus) and Disney and Kistner (1991) discuss parasitism by phorid flies while Shattuck (2008) discussed its taxonomy.

A member of the pachycerus group. Head capsule completely punctate; scape relatively short (scape index < 103); pronotum entirely sculptured with dense micro-reticulations. This species can be separated from the morphologically similar A. nesiotis by the broader head (cephalic index > 87 and head width > 0.70mm compared to cephalic index < 88 and head width < 0.70mm) and the relatively shorter scapes (scape index < 103 compared to scape index > 107 in A. nesiotis). 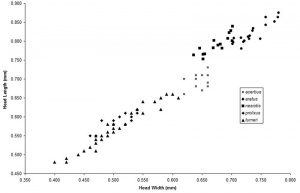 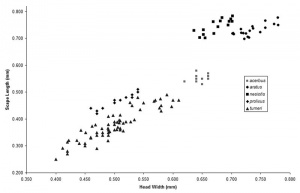 Little is known about the biology of Aenictus aratus. The genus is comprised of species that live an army ant lifestyle. Aenictus typically prey on other ants, from other genera, or other insects such as wasps or termites. There are reports of Aenictus preying on other insects as well and even have been observed collecting honeydew from homopterans (Santschi, 1933; Gotwald, 1995) but this appears, at least from available evidence, to be uncommon. Foraging raids can occur day or night across the ground surface. Occasionally raids are arboreal. During a raid numerous workers attack a single nest or small area, with several workers coordinating their efforts to carry large prey items back to the nest or bivouac. Aenictus have a nomadic life style, alternating between a migratory phase in which nests are temporary bivouacs in sheltered places above the ground and a stationary phase where semi-permanent underground nests are formed. During the nomadic phase bivouacs move regularly, sometimes more than once a day when larvae require large amounts of food. Individual nests usually contain up to several thousand workers, although nest fragments containing only a few hundred workers are often encountered. Queens are highly specialised and look less like workers than in most ant species. They have greatly enlarged gasters (dichthadiform) and remain flightless throughout their life. New colonies are formed by the division of existing colonies (fission) rather than by individual queens starting colonies on their own.

This species was previously thought to be wide spread and occurring from India eastward into Australia (Wilson, 1964). However, Shatttuck (2008) examined this taxon and restricted it to Australia with the extra-Australian specimens being referred to A. aitkenii, A. levior and likely additional as-yet unrecognised species. Detailed examination of this material will be required to resolve the true taxonomic status of these non-Australian ants.

Aenictus pachycerus impressus Karavaiev was synonymised with A. aratus by Shattuck (2008). The nomenclatural history of this name is rather complicated. It was first used by Karavaiev (1926) when describing the variety levior (as Eciton (Aenictus) impressus var. levior). The next year Karavaiev (1927) noted that A. impressus had actually never appeared in print and that he had used the name based on a specimen identified and labelled with this name that he had received from Forel. He then contacted Forel who provided notes from his 1893 notebook which listed the name “Aenictus bengalensis Mayr rasse impressus nov. subsp.”, followed by a short description complete with comparisons to A. aitkenii and A. bengalensis. The name impressus was not mentioned again until Bolton (1995) included it in his catalogue, listing Karavaiev (1927) as the author and noting that the type locality was unknown but was probably India. 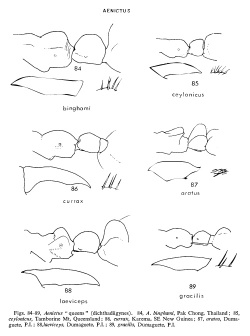 Shattuck (2008) studied two specimens from the Forel Collection (Musee d'Histoire Naturelle Genève) labelled as “Ae. impressus For. type” from Mackay, Queensland and collected by Turner, with the label being typical of Forel’s handwriting. These specimens had been more recently labelled as A. aratus and were stored with other “aratus” specimens, clearly indicating that they were considered to be types of A. aratus. This treatment is supported by the original description of A. aratus (Forel, 1900) where Mackay is listed as the type locality and Turner as the collector (and where comparisons are made to A. aitkenii and A. bengalensis).

Shattuck (2008) concluded that what seems to have happened is that Forel (around 1893) determined that he had a new taxon which he intended to name impressus and labelled the specimens using this name. However, when preparing the 1900 description he changed the name to A. aratus but neglected to update the specimen labels. He then sent a pin from this series to Karavaiev, who used the name on the specimen (impressus) when establishing A. levior (Karavaiev, 1926) not realising that this name was unpublished. Karavaiev (1927) then made matters worse by providing enough information for the name to be considered available by Bolton (1995). To confuse things further Forel’s (1893 notes and 1900) comparisons with the Indian species A. aitkenii and A. bengalensis implied that this is an Indian species. In fact, it would appear that both of these names, A. aratus and A. impressus, are based on the same type series from Mackay, Queensland. Using this assumption, a single specimen housed in Geneva (Musee d'Histoire Naturelle Genève) was selected by Shattuck (2008) as the lectotype for both names, relegating A. impressus as a junior objective synonym of A. aratus.