The type species of the genus, it is only known from the male caste. Nothing is known about the biology of Aenictus ambiguus.

Little is known about the biology of Aenictus ambiguus. The genus is comprised of species that live an army ant lifestyle. Aenictus typically prey on other ants, from other genera, or other insects such as wasps or termites. There are reports of Aenictus preying on other insects as well and even have been observed collecting honeydew from homopterans (Santschi, 1933; Gotwald, 1995) but this appears, at least from available evidence, to be uncommon. Foraging raids can occur day or night across the ground surface. Occasionally raids are arboreal. During a raid numerous workers attack a single nest or small area, with several workers coordinating their efforts to carry large prey items back to the nest or bivouac. Aenictus have a nomadic life style, alternating between a migratory phase in which nests are temporary bivouacs in sheltered places above the ground and a stationary phase where semi-permanent underground nests are formed. During the nomadic phase bivouacs move regularly, sometimes more than once a day when larvae require large amounts of food. Individual nests usually contain up to several thousand workers, although nest fragments containing only a few hundred workers are often encountered. Queens are highly specialised and look less like workers than in most ant species. They have greatly enlarged gasters (dichthadiform) and remain flightless throughout their life. New colonies are formed by the division of existing colonies (fission) rather than by individual queens starting colonies on their own.

Only knowm from the male caste. 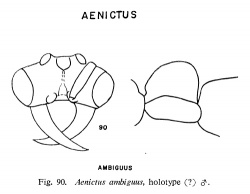 Wilson (1964) - Holotype: Since this species is the type species of Aenictus, a special effort has been made to locate and identify the male type. In the publication of W. Horn and I. Kahle on insect collections (1936, Ent. Beihefte in Berlin-Dahlem 3: 161-296) the collection of William Edward Schuckard is stated to have been auctioned in 1868 via J. C. Stevens from London. Mr G. E. J. Nixon (per. comm. 1963) informs me that no specimen referable to the type can be found in the British Museum, one likely repository in England. Mr Ernest Taylor, on the other hand, has located a single male labeled "Aenictus Schuck. ambiguus.Ind " on what appears to be a very old label, in the Oxford University Museum. I am indebted to Mr Taylor for the loan of this specimen. Unfortunately, Horn and Kahle did not publish a sample of Schuckard's handwriting, so that the Oxford specimen cannot be readily authenticated in this manner. However, it does fit the concept of A. ambiguus of past ant taxonomists, especially Bingham, Forel and Wheeler, and it would seem to be usefully regarded as the type specimen. Three males in the collection at the Museum of Comparative Zoology have been compared in detail to it and are available for future reference when the exact worker-male association can be made. Meanwhile, it can be confirmed that the Oxford specimen is indeed an Aenictus, and it is further possible to trace it with some confidence to the pachycerus group. Beyond this, placement is less easy. It is certainly not aratus. The Walajanagar males belonging to aratus have medium brown pedicel and gaster, only slightly lighter in shade than that of the mesosoma and head, whereas in the ambiguus type the pedicel and abdomen are dark yellow, contrasting to the medium brown mesosoma and head; the mandibles of the aratus males are shorter and broader; the median impression of the petiole is also distinctly less deep in the aratus males. If our conclusion is correct that ambiguus is a member of the pachycerus species group, and if it is the male of a species also known from the worker, there remain 8 species in the group after we have eliminated aratus: Aenictus biroi, Aenictus dentatus, Aenictus pachycerus, Aenictus philippinensis, Aenictus philiporum, Aenictus punensis, Aenictus rabori, Aenictus reyesi. All but pachycerus and punensis can be eliminated on the basis of their distribution. Of the remaining 2, punensis is the less likely, since it appears to be relatively rare and possibly also local in distribution. On the other hand, the distribution of pachycerus encompasses that of ambiguus. Both pachycerus (known only from workers) and ambiguus (known only from males) are abundant within their broadly overlapping ranges. When worker-male associations are made, ambiguus should be readily recognizable by fig. 90 and the more detailed figures of Bingham (1903), and the identification can be made definite by comparison with either the Oxford type or the closely compared specimens in the Museum of Comparative Zoology. The HW of the Oxford type, across and including the eyes, is 1.66 mm. Besides the characters implicit in fig. 90 and the distinctive coloration already mentioned, it may be important that the entire body of this specimen is covered with dense, appressed, pale yellow hairs. 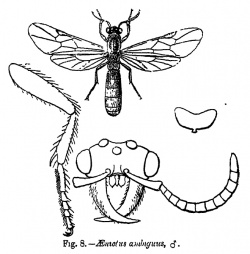 Reddish testaceous, covered with a close silky down; head, with the exception of the antennae and mandibles, which are of the same color as the body, black and shining; ocelli placed upon an eminence on the vertex, in a curve; mandibles very long, much curved, somewhat broadest at the base, pubescent externally, and when closed leaving a wide space between them and the c1ypeus, upon the anterior margin of which the antennae are inserted in a cavity, the inner carinated edges of which join in the centre of the face, forming a single carina, which extends to the anterior ocellus. Antennre rather robust, equally thick throughout, the scape not thicker than the flagellum and about one third its length.

Thorax black, or sometimes pitchy, covered with a close decumbent down; convex, very gibbous at the scutellum, which is quadrate: superior wings with the nervures and stigma brown; the tegulre testaceous; legs short, slender, testaceous, and covered with long loose hair.

Abdomen testaceous, covered with close decumbent down, with the peduncle wider than the second segment, deeply canaliculated, and of the shape of a saddle reversed, rounded at the base; the terminal segment rounded and obtuse.

Bingham (1903) - Head jet-black, shining; thorax deep brown; antenna, mandlbles, legs, and abdomen yellow. Head constricted behind the eyes, smooth and shining at back, with short erect pubescence in front; mandIbles long, sickle-shaped. Thorax very convex above; scutellum prominent, truncate, or slightly emarginate posteriorly, overhanging the postscutellum and metanotum; this last almost vertical, with little or no basal portion; the whole thorax covered with long, recumbent, whitish-yellow hairs: legs comparatively long, With the femora and tibiae cylindrical, not compressed, and only very slightly and gradually clavate towards the apex; wings clear hyaline, nervures yellowish brown. Pedicel about as wide as the base of the abdomen, concave from right to left, the sides parallel; abdomen subclavate, bent downwards, pubescent, the hairs long, yellowish white, recumbent.