Difference between revisions of "Solenopsis"

Solenopsis is a large, cosmopolitan, and taxonomically difficult genus of mostly minute, monomorphic, wholly subterranean species. These minute species frequently live as thief ants within the colonies of other larger species of ants or termites. Some New World species are larger and the workers are polymorphic. These species have colonies that can be very large and the workers are aggressive surface foragers. These ants are commonly referred to as "fire ants" because of the intense, burning sensation caused by their stings. The fire ants are important pest species. (Wheeler and Wheeler 1986)

Workers can be separated from similar genera such as Monomorium, Dolopomyrmex, Carebara by the ten segmented antenna and the two segmented antennal club. There are english and spanish keys for the New World thief ants.

Pitts et. al. (2018) - There are approximately 190 described species of Solenopsis worldwide (Bolton 1995). Most of these species are characterized by small, monomorphic workers that form small colonies and can display a lestobiotic lifestyle, living in the nest walls of other ant species from which they steal food and brood (Thompson 1980, 1989; Pacheco and Mackay 2013). These habits have earned such Solenopsis species the name “thief ants.” A smaller group composed of five species of Solenopsis are considered inquiline social parasites of other ant species. These inquiline social parasites live alongside the host queen, generally lack a worker caste, and their brood is made up only of sexuals (Buschinger 2009). Among the remaining Solenopsis are 20 New World species that differ greatly from the thief ants and social parasites in their biology. These species have larger, polymorphic workers, form enormously populous colonies, and are highly aggressive in their foraging and defensive habits. The painful sting wielded by the workers has earned such Solenopsis species the name “fire ants.” Most fire ant species are Neotropical, although five species are native to North America (Chialvo et al. 2018). One of these (Solenopsis geminata (Fabricius), the tropical fire ant) and two of the Neotropical species (Solenopsis invicta Buren, the red imported fire ant, and Solenopsis richteri Forel, the black imported fire ant) have been inadvertently introduced to locations far from their native ranges. Solenopsis geminata has been introduced throughout the tropics worldwide (Wetterer 2011, Gotzek et al. 2015), S. invicta has been introduced to the United States and several other Pacific Rim countries (Lofgren 1986, Callcott and Collins 1996, Henshaw et al. 2005, Ascunce et al. 2011, Wetterer 2013), and S. richteri has been introduced to the United States (Lofgren 1986).

Solenopsis invicta and S. richteri have become economically important pests in the United States, where they invade lawns, pastures, and roadsides, attacking and stinging native animals, livestock, and humans when colonies are disturbed, and evidently out-competing native ants for food and nesting habitat (Lofgren et al. 1975, Jouvenaz 1990, Guillebeau et al. 2002, Tschinkel 2006). Annual economic losses in the United States attributable to the imported fire ants are estimated at $6 billion (Lard et al. 2006). Although the pugnacious nature of these exotic ants makes them undesirable inhabitants of areas that they have newly colonized, they nonetheless have become premier objects of study for ecologists and evolutionary biologists. For instance, fire ants offer one of relatively few well-documented cases of the formation of a hybrid zone in historical times (Vander Meer et al. 1985, Ross et al. 1987a, Shoemaker et al. 1996), which makes them a rich source of information for genetic studies of speciation (Baack and Rieseberg 2007, Nolte and Tautz 2010). Fire ants also show variation in the social organization of their colonies, some of which appears to be under simple genetic control (Krieger and Ross 2002, Wang et al. 2013), making them important model systems in the study of social evolution (Gotzek and Ross 2007, Smith et al. 2008, Robinson et al. 2008, Fischman et al. 2011). The flexibility demonstrated by some species in having either a single egg-laying gyne (monogyny) or multiple egg-laying gynes (polygyny) in a single colony has sparked comparative ecological and evolutionary studies about the causes and consequences of such variation (Vargo and Fletcher 1987, Ross and Keller 1995, Porter et al. 1997, Gotzek and Ross 2007, Huang and Wang 2014). Solenopsis also includes several social parasites that use various ant species as their hosts (Calcaterra et al. 2000, Davis and Deyrup 2006, Deyrup and Prusak 2008), a characteristic that is of great interest for studies of social evolution as well as integrated pest management.

Historically, Solenopsis has been a taxonomically difficult group (Creighton 1930, 1950; Wilson 1952; Buren 1972; Trager 1991; Pacheco and Mackay 2013). In South America, where species diversity is highest, distinguishing Solenopsis species is exceedingly difficult due to a paucity of reliable characters that are constant within putative species yet differ between them. Frustration with this situation prompted Carlo Emery to call the group the crux myrmecologorum (Creighton 1930).

Pacheco and Mackay (2013) - The thief ants group of the genus Solenopsis is virtually cosmopolitan throughout the New World. The genus ranges from southern Canada to Argentina. The majority of the species can be found in tropical rain forests, especially in areas of thick leaf litter. Most colonies of the smaller species are found in the soil without an entrance hole, unless nuptial flights are occurring. Occasionally nests are discovered under stones, but are often found while one is excavating the nest of another ant species (Mackay and Mackay 2002). They are considered thief ants because they pilfer the nests of other ants, where they steal brood or food. Some species are considered pests, such as Solenopsis molesta, perhaps the most abundant of the "smaller species." It can be found in parks and residential areas and occasionally is a house pest. Many species can be collected with subterranean baited traps set at least 10 cm down in the soil column. The ecology of most species is virtually unknown. 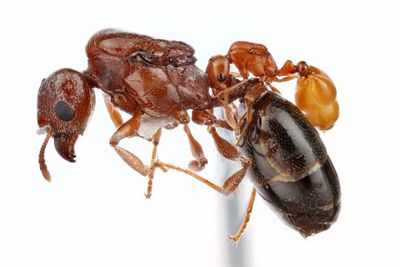 Alex Wild (March, 2017) - As best as I can discern, this little Solenopsis is undescribed. She was clinging to the petiole of a Pheidole tetra queen at Brackenridge Field Lab, Texas, and remained firmly attached even in ethanol. While similar to Solenopsis phoretica, she differs in the structure of the petiolar process and in the pilosity.

An unknown species of Solenopsis is a host for the eucharitid wasp Orasema pireta (Varone et al., 2010; Baker et al., 2019).

Pitts et. al. (2018) - Creighton (1930, 1950) stated that both males and gynes of Solenopsis appear to offer better characters for specific determinations than do the workers. Because individuals of the sexual caste tend to be larger than the worker caste and have a less generalized and reduced anatomy, they could provide characters, such as those from male genitalia and wing venation, that are not obtainable from workers and are useful for identification purposes (Creighton 1930, 1950). This study found that the amount of intraspecific variation occurring in the adult males and gynes was equivalent to that of workers, making the taxonomic information gained from these castes no better than that obtained from workers. Furthermore, the morphometric measurements and indices of the adult males and gynes alone are inadequate for determining species. Given a choice, workers still offer the most reliable and numerous characters, and these characters alone usually are sufficient for making accurate species identifications. Even though the morphology and morphometrics of sexuals are of limited use alone, they greatly improve the accuracy of identifications of fire ants when used in concert with data for the workers.

Pitts et. al. (2018) - For many Hymenoptera, the male genitalia are of great diagnostic utility. Sexual selection is hypothesized to often drive the rapid divergence of the morphology of male genitalia once speciation occurs (Eberhard 1985). Also, because the male genitalia are structurally complex, the likelihood that related species would become similar in this structure through parallelism is low (Mayr 1969). Thus, genitalic characters are potentially useful for distinguishing even closely related species. This is not the case for Solenopsis. Although there are slight differences between the Solenopsis fugax species-group and several of the other fire ant species-groups, this study found that the male genitalia of the species within the S. saevissima species-group were relatively homogeneous and uninformative. After study of the genitalia of many Solenopsis exemplars, we also conclude that characters used by Baroni-Urbani (1968) to raise Diplorhoptrum to the generic level are not found in all of the species he placed in this taxon. Furthermore, Diplorhoptrum species such as Solenopsis tennesseensis and Solenopsis abdita have genitalia more closely resembling those of the fire ants than those of the European Diplorhoptrum species, S. fugax. This information provides additional support for the synonymy of Diplorhoptrum with Solenopsis, as proposed by Bolton (1987).

Pitts et. al. (2018) - Although wing venation in Solenopsis may provide valuable data for inferring the higher-level phylogeny of the tribe Solenopsidini in the future, as proposed by Brown and Nutting (1950), it appears to be too conservative within the S. saevissima species-group to be phylogenetically informative (Pitts et al. 2005). Moreover, wing venation tends to be too similar across species and too variable within species to provide diagnostic information.

Intraspecific variation and individual aberrations in wing venation were commonly observed, including: 1) swelling in the Rs+M vein in the radial cell of a Solenopsis pusillignis gyne and S. richteri gyne; 2) coarseness of the Rs vein and the veins delineating the radial cell in individuals of several species; 3) swellings on the Cu vein of a S. macdonaghi male; 4) swellings on the Rs+M vein in the median cell of a S. megergates gyne. These abnormalities are found in other species-groups and are probably characteristic of the genus Solenopsis as a whole (see also Ross and Robertson 1990). In some cases, certain veins are misplaced so that the venation looks unique, but usually the other wing on the same individual is normal. Such asymmetry has been documented for Oxyepoecus, a close relative of Solenopsis (Kempf 1974). This variation exists as well for both spectral and nebulous veins.

Other observed morphological abnormalities are noted here. A single gyne of S. megergates had two median ocelli and had coarse striations throughout the ocellar triangle. These complete striations were seen only in this single atypical specimen. One gyne of S. quinquecuspis had four propodeal spiracles. These two specimens did not otherwise differ from the typical gynes of their species. Lastly, two gynandromorphs of S. quinquecuspis were discovered, as will be discussed elsewhere.

The larval stages of ten species within the Solenopsis saevissima species-group are described in this study, eight for the first time. The morphology of these species is very similar, yet some variation occurs. Wheeler and Wheeler (1977) reported that S. invicta differed from S. richteri x invicta (described as S. richteri) in the number of setae on the dorsal side of the labrum and the number of sensilla on the ventral margin of the labrum. The present survey of many specimens and species revealed that minute features such as these are quite variable within species and thus are not very useful in species determinations. Mandibular dentition is of limited use due to varying degrees of wear resulting from feeding. Solenopsis saevissima species-group larvae are of little systematic significance because most larval features are broadly overlapping and continuous among species. However, two general groups of species can be defined on the basis of larval characters. One group includes those species with bifid setae dorsal to the antennal margin (S. metallica, n. sp., S. interrupta, S. invicta, S. pusillignis, S. saevissima), a condition termed the S. saevissima type. The other group contains those species with setae dorsal to the antennal margin that are usually simple or dentate (S. macdonaghi, S. megergates, S. quinquecuspis, and S. richteri), a condition termed the S. megergates type. This latter type appears on the basis of the inferred species phylogeny to be the apomorphic condition in the species-group (Pitts et al. 2005).