All specimens were apparently taken as strays or in Berlese or Winkler sampling in moist forests from sea level to 1000m.

Kugler (1994) - The range of alzatei is from Panama to Paraguay, from western slopes of the Andes in Colombia to the Eastern coast of Brazil. It also occurs in the Dominican Republic.

The extent of variation within this species makes me question whether this is a single species, but external characters that can be used in a key are either not marked enough to discount individual variation or not concordant. Further complicating the picture is the surprising amount of variation within four specimens from the same region of Peru, and unique sets of features found in single specimens from northern Colombia, Rio de Janeiro, and Peru. Specimens from Dominican Republic strongly resemble Rogeria creightoni workers from the same localities, but differ in lacking erect hair on the scapes and tibiae and in having narrower propodeal spines. 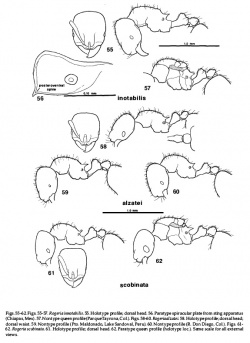 Specimens from Guyana, French Guiana, and the Caribbean coast of Colombia extend the description as follows: Mandibles triangular with 3-4 teeth plus 4 basal denticles. Clypealapron evenly convex, sometimes with medial emargination. Some with only 7-8 facets in the eyes. Some with wider propodeal spines or slightly downtumed tips. Petiolar keel sometimes distinct. Macrosculpture on head or pronotum more areolate.

Specimens from Peru, Brazil, and Paraguay extend the description somewhat differently: Palpal formula 3,2. Clypeal apron usually truncate with rounded corners; occasionally convex. Several specimens with a somewhat prominent clypeal body. Generally with smaller, elliptical eyes (OI of most 0.10-0.16), but the four workers from the Puerto Maldonado vicinity of Peru possess both the smallest eyes and largest eyes of the species (4 and 21 facets, OI 0.08 and 0.20). Nuchal groove forms a distinct notch in the head of one Peruvian worker. Mesosoma generally less compact (MHI 0.93-1.03). Petiolar keel weak to distinct. Some with postpetiolar node slightly wider in anterior half and shape Posterior pygidium with small tubercles in a Paraguayan specimen dissected. Sting apparatus with reduced anterodorsal corner of quadrate plate in a Brazilian worker.

Both collected in the same localities as alzatei workers (BCI, Panama; Quebrada Susumuco, Colombia), but not in nest series. They most resemble alzatei workers in characteristic shapes of clypeus, mandible, mesosoma, propodeal spines, petiole and postpetiole, as well as sculpture and pilosity. Mesoscutellum projects slightly beyond posterior edge of metanotum. Posterior head rugose-areolate; no tubercles. Middorsum of head covered with erect hairs.

The species is named in honor of a courageous Colombian intellectual and friend, Isaac Alzate.