Difference between revisions of "Polyrhachis dives"

This is a wide ranging species. Nesting habits seem to be identical throughout the range. P. dives is found in open woodlands and swampy coastal plains, where it builds a characteristic carton structure on the lower branches of trees and shrubs, joining the foliage and twigs with silk to form the nest (Kohout 1988, and see image below).

A member of the Polyrhachis dives species group.

Kohout (2010) - Throughout its wide distribution, P. dives is a morphologically very stable species with only a few, rather insignificant differences between individuals, even those from widely separated localities. However, south-east Asian specimens generally have a more deeply emarginate anterior clypeal margin and eyes that only rarely exceed the lateral cephalic outline. Most also have the tips of the propodeal spines more distinctly curved outwards and longer petiolar spines that are somewhat curved downwards from their midlength. In contrast, the anterior clypeal margin in Australian and New Guinean specimens is only shallowly emarginate and the eyes clearly exceed the lateral cephalic outline. The propodeal spines are only weakly curved outwards and the petiolar spines somewhat shorter and less curved.


The distribution of P. dives in Australia is apparently confined to two widely separated areas, one in the Northern Territory (Koolpinyah), and the other in North Queensland (Yarrabah south to Mission Beach). P. dives is very common in suitable habitats in Papua New Guinea, but I have never seen material collected in the Torres Strait islands, on Cape York Peninsula, or south of the Gulf of Carpentaria. The species is only moderately variable, and, although the Australian populations are each apparently well isolated from others, Australian specimens are closely comparable to those from elsewhere (Kohout 1988). 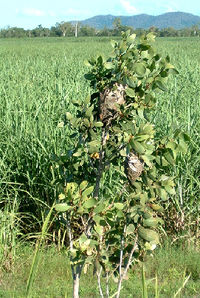 In Australia P. dives is known from two isolated populations, one in the Northern Territory and the other in northern Queensland. It prefers mostly open savannah woodlands and swampy coastal plains, where it builds its silk and/or carton-based, relatively large, usually polydomous nests between the branches and leaves of small trees and shrubs (Fig. 10C).

Two worker syntypes in Oxford University Museum of Natural History. Labelled “Tond.” (= Tondano, Sulawesi), one of them with a Donisthorpe type-label. Unless otherwise noted the text for the remainder of this section is reported from the publication that includes the original description.