Difference between revisions of "Pogonomyrmex badius"

Unusual within the genus for its distribution - it is the only species found in the eastern United States - and its polymorphic workers.

The minor worker of badius, which is the dominant subcaste, can readily be distinguished from the worker of all other species of North American Pogonomyrmex by the head shape, which is rather strongly narrowed posteriorly in full-face view, the conformation of the scape base, and the small eyes which are placed distinctly beneath the middle of the sides of the head. The major workers, as well as the intermediates, are defined nicely by their disproportionately enlarged heads. Moreover, there is an accentuation of feminine traits in the thorax of the intermediates and especially of the majors, the sclerites being well delimited and bearing a striking resemblance to those of the female caste.

The species which is most likely to be confused with badius in the worker caste is Pogonomyrmex comanche. The configuration of the petiole and post petiole is quite similar in the two, and both species have the nodes rather coarsely and generally transversely rugose. But whereas the dorsum of the petiolar node of comanche, seen in lateral view, is flattened and usually bears a distinct median depression, that of badius is convex and not depressed. Both species have a strongly arched thorax; but comanche possesses perfectly normal epinotal spines whereas badius has an unarmed epinotum under normal conditions, though it may occasionally have aberrant epinotal spination (vide infra). In comanche only the basal face of the epinotum is rugose, the declivous face being free of sculpture; in badius both faces of the epinotum are rugose.

The female of badius should be clearly recognizable. The head is very wide in proportion to its length (CI l18-121) and bears a sharply emarginate midoccipital border; the eyes are small, weakly protuberant, and set low on the sides of the head; the cephalic rugae diverge strongly into the occipital corners; the ultimate basal mandibular tooth is offset in two planes (posteriorly and dorsally, with the mandible in closed resting position); the epinotum is normally unarmed and its basal face is broadly concave. In the male, the scape is unusually long; the mandible is very broad, triangular, strongly convex, and bears 6 or 7 teeth on an oblique masticatory margin; the dorsum of the petiolar node, in lateral view, is distinctly truncate; the shape of the paramere is distinctive. (Cole 1968)

Cole (1968) - Pogonomyrmex badius is the only known eastern species in North America. It is confined to the region east of the Mississippi River and is apparently restricted to Coastal Plain states from Louisiana to North Carolina. An old record from New Jersey must be considered as highly doubtful. Although the pine barrens of the New Jersey Coastal Plain have been combed repeatedly by several myrmecologists (Creighton, 1950, p. 116), no subsequent records have come from that state. Moreover, there have been no collections of badius between New Jersey and North Carolina, a region certainly as compatible as New Jersey for establishment of that species. The westernmost records, of which I am aware, are from Lucky, Tangipahoa Parish, and Amite, St. Tamanny Parish, Louisiana. Louisiana is a state of Pogonomyrmex range fringes. Not only does it mark the known western limits of badius, but it also bears the easternmost records of Pogonomyrmex barbatus and Pogonomyrmex comanche. P. badius is unique in that it does not compete with other species of Pogonomyrmex, its range being such that apparently it is never sympatric. Even in Louisiana, barbatus and comanche are far removed geographically from badius. (Cole 1968).

Pogonomyrmex badius nests in sand or sandy soil chiefly of open woodlands and grassy fields and constructs single or multiple, flattened, circular sand craters or dome-shaped sand mounds with depressed tops. Generally the superstructure is free of peripheral vegetation and is littered at least marginally with detritus. I have taken winged forms [rom nests in southern Mississippi in May and June. Van Pelt (1953. p. 166) observed a mating flight in Florida in June. For ethological details of badius the reader is referred to papers by Carter (1962. p. 172), Galley and Gentry (1964), Van Pelt (1953; 1958, pp, 11-12), and Wray (1938). 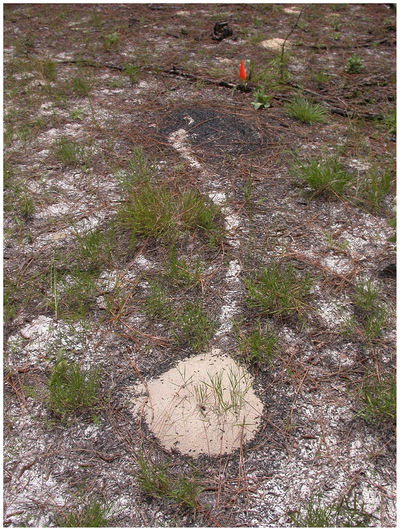 Walter Tschinkel has been studying the nesting biology of this ant for more than a decade.

Nest movement and relocation, Tschinkel 2014. Abstract: The Florida harvester ant (Pogonomyrmex badius) excavates deep nests in the sandy soils of the Gulf and Atlantic coastal plains. Nest relocations of over 400 colonies in a north Florida coastal plains pine forest were tracked and mapped from 2010 to 2013. Individual colonies varied from one move in two years to four times a year, averaging about one per year. Almost all moves occurred between May and November peaking in July when more than 1% of the colonies moved per day. Move directions were random, and averaged 4 m, with few moves exceeding 10 m. Distance moved was not related to colony size. Over multiple moves, paths were random walks around the original nest location. Relocation is probably intrinsic to the life history of this species, and the causes of relocation remain obscure— the architecture of old and new nests was very similar, and neither the forest canopy nor the density or size of neighbors was correlated with relocation. Monitoring entire relocations (n = 20) showed that they were usually completed in 4 to 6 days. Moves were diurnal, peaking in the mornings and afternoons dipping during mid-day, and ceasing before sundown. Workers excavated the new nest continuously during the daytime throughout the move and beyond. A minority of workers carried seeds, charcoal and brood, with seeds being by far the most common burden. The proportion of burdened workers increased throughout the move. Measured from year to year, small colonies gained size and large ones lost it. Colonies moving more than once in two years lost more size than those moving less often, suggesting that moving may bear a fitness cost. Colony relocation is a dramatic and consistent feature of the life history of the Florida harvester ant, inviting inquiry into its proximal and ultimate causes.

Soil movement and movement of seeds within nests, Tschinkel et al. 2015. Abstract: During their approximately annual nest relocations, Florida harvester ants (Pogonomyrmex badius) excavate large and architecturally-distinct subterranean nests. Aspects of this process were studied by planting a harvester ant colony in the field in a soil column composed of layers of 12 different colors of sand. Quantifying the colors of excavated sand dumped on the surface by the ants revealed the progress of nest deepening to 2 m and enlargement to 8 L in volume. Most of the excavation was completed within about 2 weeks, but the nest was doubled in volume after a winter lull. After 7 months, we excavated the nest and mapped its structure, revealing colored sand deposited in non-host colored layers, especially in the upper 30 to 40 cm of the nest. In all, about 2.5% of the excavated sediment was deposited below ground, a fact of importance to sediment dating by optically-stimulated luminescence (OSL). Upward transport of excavated sand is carried out in stages, probably by different groups of ants, through deposition, re-transport, incorporation into the nest walls and floors and remobilization from these. This results in considerable mixing of sand from different depths, as indicated in the multiple sand colors even within single sand pellets brought to the surface. Just as sand is transported upward by stages, incoming seeds are transported downward to seed chambers. Foragers collect seeds and deposit them only in the topmost nest chambers from which a separate group of workers rapidly transports them downward in increments detectable as a "wave" of seeds that eventually ends in the seed chambers, 20 to 80 cm below the surface. The upward and downward transport is an example of task-partitioning in a series-parallel organization of work carried out by a highly redundant work force in which each worker usually completes only part of a multi-step process.

This species is a host for the eucharitid wasp Kapala floridana (a parasite) (Universal Chalcidoidea Database) (primary host).

One of the most interesting aspects of badius is the pronounced degree of polymorphism in the worker caste. This species is the only member of its genus in North America that is polymorphic. The major workers have enormous heads provided with powerful blunt-toothed or edentate (eroded) mandibles which must be very effective in cracking seeds. The minors are "normal." Connecting these two subcastes are intermediates of variable size. (Cole 1968)

Conformation of mandible as shown in Pl. III, Fig. 19; the 7 teeth rather long, well separated, well developed, subacute; subapical tooth distinctly shorter than apical, its length subequal to first basal; length of second and third basals and ultimate basal subequal; ultimate basal only a little longer than penultimate basal, not offset from the straight or slightly concave basal mandibular margin.

Contour of head, in lateral view, as shown in Pl. II, Fig. 3. With head in full-face view, occipital border nearly straight, the distance across it markedly less than that across median or anterior cephalic region; occipital corners evenly and rather broadly rounded; eyes small, strongly protuberant, placed rather low on sides of head, the distance between their anterior margin and the mandibular insertions distinctly less than that between their posterior margin and the occipital border; frontal lobes strongly elevated, convex mesad, not obscuring bases of antennal scapes; cephalic rugae rather fine, unevenly spaced, diverging from frontal lobes into occipital corners, not forming whorls around the eyes, coarser and concentric on outer margin of antennal fossae; interrugal spaces very densely and rather strongly punctate.

Similar to the minor worker, but with the following notable differences: larger in stature, with the head disproportionately enlarged and in the major strongly emarginate along midoccipital border and hence distinctly chordate in full-face view; mandibular teeth in the major generally strongly eroded, often absent; eyes notably less convex than in the minor; head considerably broader than long, especially in the major; thorax with accentuated female characters, the sutures and sclerites well defined; epinotum unarmed or with one or more, sometimes unilateral, anomalous angles, dentides, or distinct spines; petiolar node of major notably broader than long, with a pronounced nipple; petiolar and postpetiolar nodes covered with rather coarse, dense, mostly transverse, often wavy rugae.

Mandible similar to that of minor worker, but ultimate basal tooth moderately to rather strongly offset in two planes from basal mandibular margin. Conformation of base of antennal scape as in the worker. Head notably broader than long, the occipital border distinctly and rather sharply emarginate medially; in full-face view, occipital corners very broadly and evenly rounded; head, in profile, with occipital corner very strongly and evenly convex, the curvature into the ventral cephalic margin continuing evenly without flattening and not rneeting the ventral margin at a definite angle. Eyes small, set low on sides of head; with head in full-face view, eyes only slightly break the outline of sides of head. Cephalic rugae rather fine, dense, unevenly spaced; median cephalic fugae strongly divergent into occipital corners; interrugal spaces densely and very finely punctate.

Scutum, in lateral view, broadly convex, not overhanging pronotum anteriorly. Base of epinotum broadly concave, meeting the declivity at a sharp or broadly rounded angle. Epinotum normally unarmed, occasionally with one or more anomalous angles, denticles, or spines. Thorax rather uniformly covered with fine, dense, closely spaced, mostly longitudinal rugae which are coarser and less regular on epinolllm; interrugal spaces mostly without punctures. Petiolar node much broadcr than long; petiolar peduncle with a weak to modcrately strong ventral process, hairs absent. Sculpture of petiole and postpetiole similar to that of the worker.