This species nests under stones in rocky loam soils. Brood was found in nests in July. Seeds are stored in nests. (Mackay and Mackay 2002)

From Wilson (2003): A member of the crassicornis group, similar to Pheidole crassicornis, Pheidole diversipilosa, Pheidole porcula and Pheidole tetra, but differing by the following combination of traits.

Major: pilosity consisting of sparse, very long hairs (some on first gastral tergite are 2! the maximum eye length); head in side view tapered toward occiput; rugoreticulum forms a broad swath from antennal fossa to eye on each side; carinulae along midline of dorsum of head continue to occiput; pronotum sparsely foveolate and feebly shining on sides, smooth and shiny on dorsum; postpetiole from above laterally subangulate.

Minor: petiolar node from side thin, and tapered toward apex; pilosity sparse, as illustrated; dorsum of head (except for frontal triangle and middle section of clypeus), all of mesosoma, and most of waist foveolate and opaque. 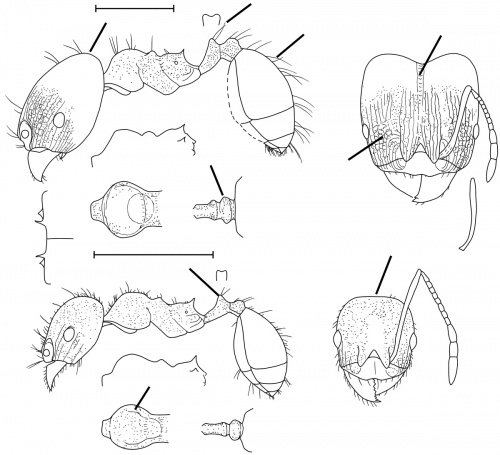 L vallicola, valley dweller, referring to the habitat of the type colony. (Wilson 2003)