Difference between revisions of "Pheidole embolopyx"

Pheidole embolopyx inhabits rainforest, nesting in pieces of rotting wood buried in litter. Mature colonies contain up to several hundred workers and a single nest queen. Winged queens have been found in March near Manaus. The queens do not use their truncated abdomens to block galleries and nest entrances, as expected (Wilson and Hölldobler 1985). Instead, it is likely that they assume a turtle-like crouching position when threatened, bringing into play the truncated abdomen, flanges on the pronotum, and gelatinous secretions on the front of the head. Wilson and Hölldobler also report the origin of an odor-trail pheromone in the poison gland and an alarm pheromone in the pygidial gland. (Wilson 2003)

In addition to two localities around Manaus, embolopyx has been recorded from Diamantino, Mato Grosso; from near Puerto Maldonado, Madre de Dios, Peru; and Yasuni National Park in Ecuador. (Wilson 2003)

From Wilson (2003): A unique species of Pheidole, distinguished in the queen by the posteriorly flattened gastral tergites, hence truncated shape of the gaster overall, and the flattened rear surface covered by peculiar short, hooked hairs.

Major: head bicolored with broad dark yellow to light reddish brown arcs over most of the dorsal surface and on the genae and the rest medium brown, as depicted; tip of antennal scape touching head margin two-thirds from level of eye to level of occiput; most of dorsal surface of head foveolate; anterior half of pronotal dorsum transversely carinulate; anterior half of central strip of first gastral tergite shagreened; propodeal spines thick, triangular; postpetiole from above oval. 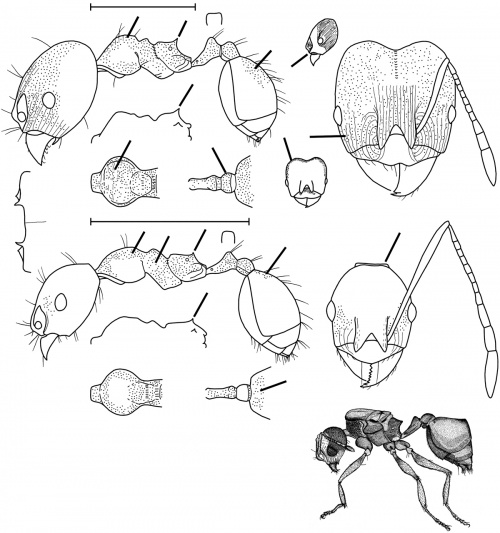 Gr embolopyx, stopper box, referring to the truncate abdomen of the queen. (Wilson 2003)