Difference between revisions of "Pheidole colobopsis"

A Peruvian colony was collected in clay soil at the base of a tree in terra firme rainforest. The nest was 12 cm deep and contained a single queen, five majors, and about 200 minors. The majors and minors in this series are a nearly uniform dark yellow to amber color. (Wilson 2003)

Southern Mexico and south through Central America, plus roughly the northern half of South American (known from Venezuela, Columbia, Brazil and Peru).

From Wilson (2003): DIAGNOSIS A typical member of the lamia group: the major has a phragmotic head, with the anterior portion incorporating the clypeus and mandibles flattened (truncated), and deep antennal scrobes. This species is easily distinguished from the other members of the lamia group (Pheidole lamia, Pheidole pelor, Pheidole truncula) by the shorter head of the major and the pattern of carinulae on its head: limited to dense longitudinal rows on the frontal lobes and frontal triangle and transverse rows on the lateral wings of the clypeus. Other differences in body form and sculpturing are as illustrated. The queen is also phragmotic. 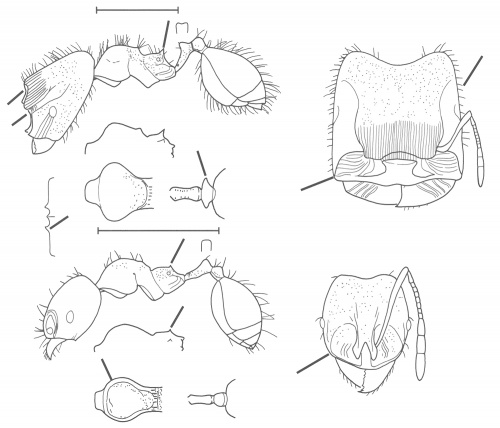 Gr colobopsis, docked, clipped, shortened, with reference to the truncated head of the major. (Wilson 2003)