Difference between revisions of "Parasites and Parasitoids"

A parasite is an organism that lives in or on another species (its host) and benefits by deriving nutrients at the other's expense, resulting in the death of the host. A parasitoid is an insect whose larvae live as parasites that eventually kill their hosts (typically other insects).

This differs from social parasitism, where the "parasite" does not feed directly on their host, but rather benefits from exploiting the host's colony.

Gonzalez et al. (2016) found that Pseudogaurax paratolmos, a fly in the family Chloropidae, parasitizes larvae of Apterostigma dentigerum. Larval ﬂies are solitary ectoparasitoids, each of which attaches to a single ant larva and develops from larva to pupa in 2 wk, consuming nearly the entire host, and then ecloses as an adult 1 wk later. Overall parasitism prevalence was 6.8% of 203 nests, and flies were active during both the dry and rainy seasons. Intensity of parasitism ranged from 18.2 to 100% of larvae attacked per parasitized nest. No other species of Apterostigma that nested in the same localities were parasitized by the flies, including Apterostigma pilosum (n = 93 nests) and Apterostigma auriculatum (n = 10 nests). All immature ants, parasitized or not, as well as immature stages of Pseudogaurax paratolmos, were attended by adult ants that exhibited normal brood care behavior, including covering immatures with mycelia, grooming, and maintaining brood in the fungus garden.

The Aphelinidae are a moderate-sized family of tiny parasitic wasps, with about 1160 described species in some 35 genera. The larvae of the majority are primary parasitoids on Hemiptera, though other hosts are attacked, and details of the life history can be variable (e.g., some attack eggs, some attack pupae, and others are hyperparasites). Males and females may have different hosts and different life histories. They are found throughout the world in virtually all habitats, and are extremely important as biological control agents.

The Chalcididae are a moderate-sized family within the Chalcidoidea, composed mostly of parasitoids and a few hyperparasitoids. As presently defined, there are over 85 genera and over 1460 species worldwide.

The Diapriidae are a family of parasitoid wasps. These tiny insects have an average length of 2–4 mm and never exceed 8 mm. They typically attack larvae and pupae of a wide range of insects, especially flies. The about 2,300 described species in 150 genera occur world-wide.

Encyrtidae is a large family of parasitic wasps, with some 3710 described species in about 455 genera. The larvae of the majority are primary parasitoids on Hemiptera, though other hosts are attacked, and details of the life history can be variable (e.g., some attack eggs, some attack larvae, others are hyperparasites, and some Encyrtidae develop as parasitoids of ticks). They are found throughout the world in virtually all habitats, and are extremely important as biological control agents. 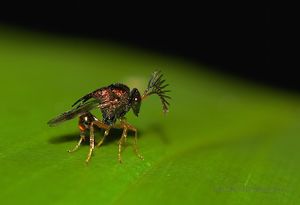 The Eucharitidae are a family of parasitic wasps and are members of the superfamily Chalcidoidea with 55 genera and 417 species. They are found in tropical regions of the world.

Eucharitids are specialized parasitoids of ants, with each species usually only parasitic of one genus of ant. They are one of the few parasitoids that have been able to use ants as hosts, despite ants’ effective defence systems against most parasitoids. Eucharitid parasitism occurs year-round, with a majority of it occurring during hot and humid months. However, the amount of parasitism that occurs depends primarily on the size of the ant colony and the number of host pupae in them, and not on the season.

The Eulophidae are a large family of hymenopteran insects, with over 4,300 described species in some 300 genera. The larvae of a very few species feed on plants, but the majority are primary parasitoids on a huge range of arthropods at all stages of development. Eulophids are found throughout the world in virtually all habitats (one is even aquatic, parasitising psephenid beetles).

The Eurytomidae are a family within the superfamily Chalcidoidea. As presently defined, some 1420 species in 87 genera are described. Unlike most chalcidoids, the larvae of many are phytophagous (feeding in stems, seeds, or galls), while others are more typical parasitoids, though even then the hosts are usually found within plant tissues. They are found throughout the world in virtually all habitats, and a few are considered pests.

The Pteromalidae are a very large family of mostly parasitoid wasps, with some 3,450 described species in about 640 genera. The majority are (as with most chalcidoids) parasitoids of other insects. They are found throughout the world in virtually all habitats, and many are important as biological control agents.