This fungus-growing ant forms small soil nests in sandy soils. Their nest entrances are marked by a turret of grass, straw and sand. The architecture and demography of nests vary between season. In autumn, nests have fewer fungus chambers and many winged ants, while in the spring, there are more fungus chambers and a significant number of immature individuals. This indicates that M. holmgreni seems to invest in reproduction during the autumn and establishes new nests during the winter, which promotes growth during the spring and summer.

A member of the Iheringi species group. Mayhe-Nunes and Brandão (2005) - The most useful character to distinguish this species from the other members of the lheringi group is the shape of the lobes on the antennal scapes. Among the species that lack pilosity on the mesopleura, it also can be distinguished from Mycetomoellerius pruinosus, which has triangular frontal lobes. It differs from Mycetomoellerius tucumanus by the shape of the small projections on petiolar node, one or two spine-like pairs in M. holmgreni and one tooth-like pair in M. tucumanus.

From Misiones Province in Argentina to northern Brazil.

This is a widely distributed ant that has been found in savanna, forest, restinga and dune habitats. 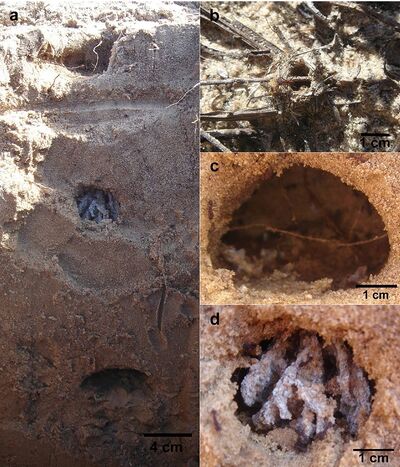 Albuquerque et al. 2018. Mycetomoellerius holmgreni nest. a Excavated nest; b Small straw turret at a single entrance hole; c Chamber 2 of a nest, dome-shaped; and d Fungus garden suspended from roots on the walls of the chamber.

Mayhe-Nunes and Brandão (2005) - The nest found at Santa Barbara do Monte Verde. Minas Gerais State, by one of us (AJMN) was excavated in sandy soil, in an area with few bushes and scarce low vegetation, about 1100 meters above sea level. The entrance hole was longer than broad (6 x 2cm) and in one of the sides had a tower of 1cm height, built with mixed grass straws and sand. The internal structure resembles that of nests of other Mycetomoellerius species, such as Mycetomoellerius pruinosus discovered by Gallardo (1916), as well as Mycetomoellerius turrifex described by Wheeler (1907). The seven alternating spheroidal chambers found were vertically disposed, with the following approximate measures: first chamber (3 x 3cm) about 5cm deep, second (7 x 7cm) to 10cm, third (5 x 5cm) to 20cm, fourth (9 x 7cm) to 30cm, fifth (7 x 5cm) to 40cm, sixth (5 x 5cm) to 50cm, and seventh (7 x 5cm) to 60 cm. The grayish fungus garden was laminated and set vertically, an appearance characteristic of grass use as fungal substrate. The first chamber had several pupae and little fungus hanging from the roof, suspended by thin roots. In the second chamber, a bulky fungus garden was also hung from the roof by roots. Equally, in the three following chambers, the gardens were big, however rested in the bottom of the chambers. The queen was in the fourth chamber; in the last two chambers, small amounts of fungus were found. Besides these chambers, five more possible trash chambers were observed containing a dark brown material, but without ants corpses. During the excavation, the workers do not feign death, a common behavior of other Mycetomoellerius. The appearance of the fungus garden and the use of grass straw to build the tower in the entrance of the nest corroborate Goncalves (1975) observations on M. holmgreni cutting fresh leaves of the grass Paspalum ancylocarpum.

Cristiano et al. (2018) - This fungus-growing ant forms small soil nests in sandy soils. Their nest entrances are marked by a turret of grass, straw and sand. The architecture and demography of nests vary between season. In autumn, nests have fewer fungus chambers and many winged ants, while in the spring, there are more fungus chambers and a significant number of immature individuals. This indicates that M. holmgreni seems to invest in reproduction during the autumn and establishes new nests during the winter, which promotes growth during the spring and summer.

Albuquerque et al. (2018) - A nest survey in Itapeva State Park (Rio Grande do Sul state, Brazil) collected nest attributes from 10 colonies and demographic information from 4 colonies. Colony sizes were: 294-581 workers, 20-107 pupae, 8-41 larvae, 0-27 males and 4-54 alate females. Dry and wet weight of the various castes were calculated and spatial aspects of the nest detailed (diameters of nest holes, chamber sizes, etc.). Colonies had a single nest entrance and typically had a small turret that was surrounding by a horeshoe shaped mound.

Hlead in full face view little longer than broad (CI 95). Mandible smooth and shining except laterally on base where it is finely transversely striate, and near the masticatory margin, which bears the apical and 8 teeth gradually diminishing towards the base. Frontal lobe sub-triangular, moderately expanded laterad (FLI 65), backwards directed and laterally subdentate; anterior border straight; posterior border weakly concave. Frontal carina diverging caudad, fading out a little before the apex of scrobe. Front and vertex with weak longitudinal gulae. Posterior third of antennal scrobe weakly delimited by the frontal carina and extension of the preocular ones. Supraocular projection as bifid or truncated spine. Occiptal corner smoothly rounded full-face view, surmounted by stout tubercles. Occiput notched in the middle. Occipital tooth developed as a stout rather smooth spine-like projection. Inferior occipital corner with carina. Eye weakly convex, no more than 14 facets in a row across the greatest diameter. Antennal scape surpassing the occipital corner by nearly ¼ of its length, when laid back over head as much as possible; basal lobe perpendicularly enlarged, its inner projection bigger than the external ones, prolonged towards the head's middle when the scape is lodged in the scrobe: anterior surface surmounted by small tubercles and ridges.

Mayhe-Nunes and Brandão (2005) - TL 5.6-5.9; HL 1.42- 1.51; HW 1.28-1.34; IFW 0.77-0.82; ScL 0.92-0.95; TrL 2.02-2.11; HfL 1.52-1.62; FWL 5.91-6.09; HWL 3.95-4.09. With the same general distinguishing characters of the workers, with the following differences: Thre ocelli on vertex, the lateral ones smaller. Pronotum with a pair of strong and acute scapular spines, directed out and forwards, and with a pair of inferior spines pointed down and forwards, smaller than the scapular ones. Mesoscutum surmounted by conspicuous tubercles, but without notable dorsal projections. With the alitrunk in dorsal view, very shallow parapses delimited by the parapsidial furrows; mesothoracic paraptera more or less impressed, with a narrow median portion; scutellum ending in a pair of moderately stout and acute spines, directed backwards, with the sides converging obliquely inwards; metathoracic paraptera concealed by the scutellum in dorsal view; propodeal spiracle orifices visible. Two strong acute spines on propodeum, longer than pronotal ones. First gastric tergite with a longitudinal ridge on each side; disk with two longitudinal series of small piligerous tubercles, absent in the middle of the segment.

Mayhe-Nunes and Brandão (2005) - TL 5.3-5.6; HL 0.83-0.95; HW 0.94-1.02; IFW 0.34-0.38; ScL 0.85-0.88; TrL 1.82-2.03; HfL 1.63-1.77; FWL 5.27-5.55; HWL 3.50-3.86. Dark brown, with antennae and legs ferruginous brown. Hairs moderately long and inclined, mixed with short and strongly curved hairs, conspicuous on head, dorsum of alitrunk and first segment of the gaster. Head. Mandibles finely striated on dorsal surface; masticatory margin with five teeth, gradually diminishing towards the base external margin s lightly sinuous. Median border of clypeus convex, with a large anterior notch; dorsal disk of clypeus without projections, but with one weak longitudinal carina on each side, between the base of frontal lobes and its anterior margin. Frontal lobes rounded and directed forwards, leaving part of the antennal insertions exposed. Frontal carinae subparallel, not reaching the occiput. Preocular carinae distinct, fading out at the posterior border of eyes. Compound eyes big and convex, filling some 1/2 of the head sides. Three prominent ocelli. Antennae with 13 segments; scape clearly surpassing the occipital corners, nearly three times longer than funicular segments I-III combined, with a basal lobe weakly projected; funicular segment I longer than II. Occipital corners rounded, with small spines and tubercles visible in frontal view. Occipital margin gently concave in the middle between the lateral ocelli.

Waist and gaster: Dorsum of petiole without projections. Postpeliole a little broader than petiole in dorsal view, superficially impressed above, with the posterior border concave. First gastric tergite without lateral ridges or piligerous tubercles, basally with a superficial impression on each side.

Wings similar as described for the female above; the unique noticeable difference is the 1Cu vein of the fore wing, much shorter in the male.

Mayhe-Nunes and Brandão (2005) - Probably in the Royal Museum in Stockholm; not examined.