This is another Megalomyrmex that inhabits the nests of fungus growing ants, in a peculiar lestobiotic relationship.

Brandão (2003) - This is another Megalomyrmex of the silvestrii group that inhabits the nests of fungus growing ants, in a peculiar lestobiotic relationship. The type specimens were found inside a nest of Trachymyrmex bugnioni (Attini), collected by J. Wetterer, to whom the name of this species is dedicated, and inside a nest of Cyphomyrmex longiscapus in Panama collected by U. Mueller. 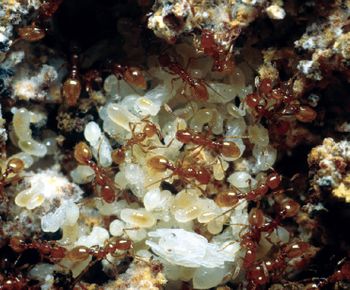 Adams et al. (1998-1999; 2000) described the finding of two colonies of this new species in Panama containing healthy fungus gardens of C. longiscapus, although no attines were present at the time of collecting. According to these authors, laboratory observations revealed that the Megalomyrmex "consume the fungus by cropping mycelium from the garden substrate. However, they do not forage for and add nutrient substrates, or otherwise tend the fungus garden; thus, when the garden becomes depleted, Megalomyrmex sp. must locate and usurp new gardens in other attine colonies". When presented with active colonies of C. longiscapus, workers of this new species displace "host" workers in mass raids, stinging and ultimately killing the apparent defenseless C. longiscapus. When presented with C. longiscapus larvae in the laboratory, M. wettereri workers strip them of the mycelium layer that naturally covers the cuticle, then place the larvae with their own brood. Adams et al. (1998-1999) considered this Megalomyrmex as a predator on C. longiscapus as they forcibly eject the resident attine to usurp their fungus gardens.

Adams et al. (2000) described in detail how this species conducts mass raids to usurp gardens of C. longiscapus, then lives in the garden and consumes the fungi. Megalomyrmex wettereri workers feed their larvae with attine brood only after removing the fungal mycelium that covers the attine larval integument, suggesting that this fungal coat may provide partial protection against predators.

Boudinot et al. (2013) - This species has been described as a guest ant or an agro-predator, depending on its host choice. It has been collected cohabiting with Trachymyrmex cornetzi by Jim Wetterer in 1993 in Costa Rica and from numerous usurped Cyphomyrmex longiscapus colonies in Panama (Adams et al. 2000; Brandão 2003; Longino 2010). When M. wettereri takes over a Cyphomyrmex colony the M. wettereri workers fill the typically open auricle with soil (fig. 248) allowing them to maintain the garden free of the fungus-growing host workers and stealing most of the fungus garden (fig. 249). Single queens have been collected within usurped gardens suggesting that they are able to infiltrate a colony without the help of workers (Adams et al. 2000; RMMA unpubl. data), but larger colonies with >60 workers and up to three queens are typical. An unmistakable behavior exhibited by M. wettereri during host colony infiltration and colony disturbance is gaster flagging (http://youtu.be/Wb8tSLHwcUA). This behavior is seen in many other Megalomyrmex but is most frequently observed and very obvious in this species.

Mandibles smooth, except for the coarse rugosities at the external area near the base (Fig. 1), dental formula 2+6; palp formula 3:2 (?); anterior clypeal border without median denticle; compound eye with 5 ocular facets at its largest diameter; occipital margin not raised; promesonotal suture not impressed dorsally (Fig. 2), mesonotum undistinguished from pronotum; metanotal groove longitudinally rugose; katepisternum smooth; propodeum spiracles laterally projected in an angle of 45° from the main axis of the body; base with divergent carinae at the meeting with propodeum sides, declivity smooth; epipetiolar carina not complete over the foramen; dorsal profile of petiole, in side view, evenly curved till apex of node, ventral face with a pronounced anteromedian double denticle (Fig. 3) originating in a non-translucent short longitudinal flange; dorsal margin of petiolar node, in frontal view, round; ventral process of postpetiole produced in a sharp tooth.

Three equally developed ocelli; mesonotum with notaulus; katepisternum distally rugose; propodeum dorsal face and declivity meeting in an angle similar to that of the conspecific workers; petiole and postpetiole also similar in shape and sculpture to the con-specific workers.