Difference between revisions of "Leptanillinae"

The subfamily Leptanillae contains 6 genera, 2 of which are known only from males. These ants occur from Africa and southern Europe east to Japan and Australia. No species are currently known from North or South America. Only a single genus (Leptanilla), with a single species (Leptanilla swani), is known from Australia. This is a rarely encountered species that is ground nesting and most often seen when males are found at lights at night.

The ant subfamily Leptanillinae represents one of the early branches of ant phylogeny, and until the recent discovery of Martialinae, the leptanillines were considered to be sister to all other ants under certain molecular phylogenetic analyses (Moreau et al. 2006, Brady et al. 2006, Rabeling et al. 2008). Brady et al. (2006) however, question the statistical rigor of this result and suggest alternative rooting of their tree that would result in Amblyoponinae and Leptanillinae emerging within a clade together with Agroecomyrmecinae. A close relationship of amblyoponines and leptanillines is also supported by some shared morphological and behavioral features (Brown et al. 1971, Gotwald & Lévieux 1972, Masuko 1986, 1990, Bolton 1990, Ward 1994, Brady et al. 2006, Yamane et al. 2008).

The Leptanillinae are infrequently collected, they are small to tiny subterranean ants, and very little is known of their habits. Masuko (1990) studied the biology of Leptanilla japonica and showed that adult queens are incapable of taking food on their own, instead relying on larval haemolymph secreted through specialized abdominal structures. Recent collections of Leptanilla in Europe show that there is a high cryptic diversity of these ants in the Mediterranean region (López et al. 1994, Scupola & Ballarin 2009). López et al. (1994) reported collecting large numbers of Leptanilla thanks to a rarely employed method and searching in a habitat rarely explored by ant collectors, i.e., “lavage de terre” method and sandy banks of periodic streams.

The subfamily is presently divided into two tribes, Anomalomyrmini Taylor, 1990 and Leptanillini Emery, 1910.

Workers of Leptanillinae are recognised by their small size, pale yellow colour, lack of eyes and slender bodies with a 2-segmented petiole. They may be confused with some small myrmicines (ants of the subfamily Myrmicinae). Myrmicines have frontal lobes which are expanded towards the sides of the head and partly or completely cover the bases of the antennae. Leptanillinae lack frontal lobes and have the antennae completely visible when viewed from the front. They are also similar to smaller Aenictus workers, but differ in being smaller and having 12 segments in the antennae rather than 10.

Keys including this Subfamily

Keys to Genus in this Subfamily

Distribution and Species Richness based on AntMaps

No fossil taxa are known from this subfamily.

No fossil genera within subfamily.

All diagnoses in the references below pertain to the tribe Leptanillini; males of Anomalomyrmini undescribed.

The Leptanillinae, based on males, is defined by the apomorphies presented in the diagnosis (in italics). At present the subfamily is comprised of eight genera with the re-inclusion of the male-based taxa Noonilla Petersen, 1968 (stat. rev.) and Scyphodon Brues, 1925 (stat. rev.). Both N. copiosa Petersen, 1968 and S. anomalum Brues, 1925 are transferred to the Leptanillinae.

The Leptanillinae was first delimited as a tribe of Dorylinae by Emery (1910), but has consistently been considered a distinct subfamily since Wheeler (1923), except for Bernard’s (1951) treatment of the “Formicoidea”, in which the leptanillines were treated as a family. Opamyrma was described by Yamane et al. (2008) who assigned the genus to the Amblyoponinae using the concept of Saux et al. (2004) for the subfamily, although they concomitantly referred to the genus as belonging to the Apomyrminae. Discovery of the male of Opamyrma and the larvae and gynes of Opamyrma and Martialis are anticipated to contribute to the resolution of the “basal ant problem”.

As noted by prior authors (e.g., Baroni Urbani 1977; Bolton 1990b; Ogata et al. 1995), the Leptanillinae is unfortunately subject to parallel taxonomies, with two genera known only from workers (Anomalomyrma, Furcotanilla), four genera known only from males (Noonilla, Phaulomyrma, Scyphodon, Yavnella), and two genera known from both castes (Leptanilla, Protanilla). The Leptanillinae is in need of generic revision, especially given the highly variable morphologies of the males. As this is beyond the scope of the present paper, the male of Protanilla, although recently identified by the Ant Tree of Life Team (P.S. Ward et al., unpubl. data; AntWeb 2014), is not described. Moreover, there is a spectacular and perplexing diversity of leptanilline males from Southeast Asia, which await classification and association with workers (Fig. 10).

Except for the mandibles of Scyphodon and the sexual characteristics of Noonilla, these two are “typical” leptanillines (compare specimens in Fig. 10). They exhibit proposed formicid synapomorphies: the prodisticoxal cavity is closed, the propodeal spiracle is situated low on the propodeum, and the metasoma is petiolate. Placement of these genera in the Leptanillinae is supported by the presence of the following apomorphies: mandibles nub-like to spatulate (secondarily hypertrophied in Scyphodon); buccal cavity reduced; medial hypostoma vestigial; clypeus strongly reduced; and Ogata venation type IVb. The following characteristics support the placement: palpal formula 1,1; meso-segment of mesosoma elongated anteriorly; and abdominal tergum VIII enlarged (not present in all material attributed to Scyphodon). Of the formicid pleisiomorphies present in these genera, the most diagnostically valuable is absence of propodeal lobes.

Ogata et al. (1995) indicated several characters which were dubiously diagnostic for the Leptanillinae, specifically including: reduced palp formula; elongated pronotum; fore femora shape; reduced venation; metapleural gland absence; terminal abdominal segment reduction; cupula (= basal ring) absence; and cuspis absent. It is agreed that palpal formula may be reduced in other Formicidae, but reduction to 1,1 occurs in the Dorylinae (Aenictogiton), the Myrmicinae (e.g., Eurhopalothrix, Pheidole and Tetramorium-clade inquilines, Strumigenys, Rhopalomastix), and the Ponerinae (e.g., Hypoponera and Simopelta). It is evident that Scyphodon and Noonilla are not closely related to the genera indicated above. The elongate mesoscutum with concomitant posterior elongation of the pronotum is not present in all Leptanillinae and also occurs in Apomyrma (Amblyoponinae), but is otherwise unique among the Formicidae. The fore femoral modifications of Noonilla are autapomorphic, and are certainly sexual characters. As discussed in note 5 of the Leptanillinae diagnosis, the reduced venation of the Leptanillinae is highly diagnostic of the group. Certainly, of any of the dubious characters Ogata et al. indicated, the metapleural gland absence is the least valuable and in no way supports contentions about relationships in male ants. It is difficult to assess development of the cupula without dissecting the few specimens of Noonilla and Scyphodon available, so evaluation of these characters is set aside for future studies. Cuspides are present at least in some Protanilla males, and thus are not diagnostic for the Leptanillinae on the whole, but absence may be apomorphic for the remainder of the subfamily. 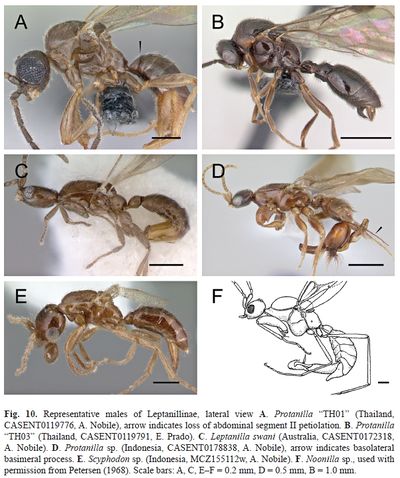 Leptanillinae are recognizable by the combination of nub-like mandibles, extremely reduced wing venation (three cells enclosed by tubular abscissae at most development: costal, basal, and subbasal cells; no cells enclosed by tubular abscissae at least development), and absence or inconspicuousness of propodeal lobes. Otherwise, male leptanillines are highly variable, often resembling “normal” poneroids, although some males are so derived as to be difficult to intuitively ascribe to the Formicidae; this modification includes even loss of abdominal segment II petiolation.

17. Ogata wing venation type IVb (Fig. 4F), but would be type IIIb should the maximum complement of spectral veins be hypothetically tubular; at most 3 closed cells present (costal, basal, subbasal); at the most extreme reduction only Sc+R+Rs and Rf present along anterior wing margin, with narrow stretch of membrane present anterobasally (notes 5, 6).

29. Basimere separated from telomere ventrally by corium or basimere and telomere fused.

4. The polarity of pterostigmal reduction is unclear, as Anomalomyrma and some Protanilla have an enlarged pterostigma; it seems likely though that this is a secondary development.

5. Wing venation also reduced to the Ogata type IVb pattern convergently in other groups, including some Myrmicinae (Strumigenys, the Adelomyrmex genus group, and the inquiline Pheidole acutidens) and some Proceratiinae (Probolomyrmex). These taxa may be distinguished from leptanillines by a suite of characters, including presence of the propodeal lobe. Contrary to the sentiment of Ogata et al. (1995) the reduced wing venation of the Leptanillinae is eminently valuable for diagnosis of the subfamily. While certainly this reduction in venation may be driven by functional constraints, the particular pattern occurring in the Leptanillinae is nearly globally unique. Although it has been indicated that the forewing venation of Leptanilla is completely absent (Wheeler 1910; Bernard 1968; Wheeler & Wheeler 1972), no specimens were observed which had this state; at the least one compound abscissa was present along the leading wing margin.

7. One morphogroup of South East Asian male Leptanillinae has lateromedially compressed valviceps, other morphogroups and genera have the lateral apodeme consistently laterally produced, and often modified.