Difference between revisions of "Formica polyctena"

A wood ant, which is one of a number of Palearctic Formica species that build complexes of large mound nests, have large numbers of workers and collect honeydew.

Erect hairs on head and mesosoma very sparse and short or absent, except on posterior margins of mesopleura. Gula hairs, if present, are restricted to one or two very weak hairs. Microsculpture is usually slightly coarser than in F. rufa but punctures and micropunctures are widely spaced as in that species. Length: 4.0-8.5 mm (Collingwood 1979).

Spain to Siberia, Italian Alps to latitude 60º in Sweden (Collingwood 1979).

Collingwood (1979) - This is accepted as a good species by most European authors, eg. Betrem (1960), Dlussky (1967), Kutter (1977). Some samples of Formica rufa tend to approach the hairless condition of F. polyctena however, making certain determination sometimes difficult. Elton (priv. communication) found that F. polyctena in its most typical form readily accepted fertile queens and pupae from other distant nests of the same species but were always antagonistic to and rejected such from both polygonous and monogynous colonies of F. rufa. This is usually found in a group of nests and always has many queens, sometimes up to 1,000 or more. 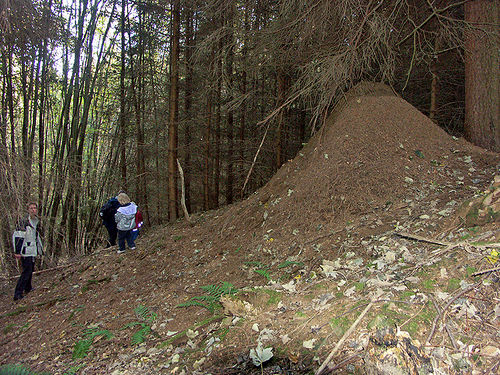 This is a relatively well studied species and one that had long confounded myrmecologists in regards to its specific taxonomic identity. Collingwood's statements above are indicative of these problems. What follows is a more recent summary that provides insight into our latest understanding of this ant. This is taken from Siefert et al (2011). The details for the cited works are given in the original publication.

The wood ant species Formica polyctena and Formica rufa are important elements of temperate forest ecosystems of the West Palaearctic. They are considered to give protection against a number of pest insects in natural and secondary, managed forests (reviewed by Otto 1967) and are a symbol and main target of nature conservation in many countries of Europe. Yarrow (1955) and Betrem (1960) considered F. polyctena and F. rufa as clearly different species and this view had been generally adopted for 35 years. The situation changed when Seifert (1991) published a comprehensive study on external morphology and biological parameters of 430 nests collected in different regions of Central, East and North Europe. In addition to the typical F. polyctena and F. rufa, he found a third entity which was intermediate in each investigated phenotypic or biological character: body size, eight size-corrected pilosity characters, monogyny frequency, size of nest populations, diameter of nest mounds and infestation rate with epizootic fungi. He concluded that the third entity was a fertile hybrid between F. polyctena and F. rufa.

Novgorodova (2015b) investigated ant-aphid interactions of a dozen honeydew collecting ant species in Western Siberia pine and aspen-birch-pine forests (54°7´N, 83°06´E, 200 m, Novosibirsk) and mixed-grass-cereal steppes with aspen-birch groves (53°44´N, 78°02´E, 110 m, near Karasuk) in the Novosibirsk Region and coniferous forests in the northeastern Altai (north end of Lake Teletskoe, 51°48´N, 87°17´E, 434 m). All of the ants studied had workers that showed high fidelity to attending particular aphid colonies, i.e, individual ants tend to return to the same location, and group of aphids, every time they leave the nest. F. polyctena's honeydew collecting activities were highly coordinated during the summer months when the aphids and ants were most active. Individual foragers specialized on specific tasks and could be classified as shepherds (collect honeydew), guards (protect aphids from competitors), scouts (search for new aphid colonies) and transporters (transport honeydew to the nest). Individuals performed the same type of work day after day, with groups of the same workers, thereby forming teams. In cooler months when aphids were still active foragers were less specialized: some ants were "on duty" (constantly present in a particular aphid colony, collecting honeydew and /or protecting aphids from various competitors) and others that showed no specialization. F. polyctena tended: Symydobius oblongus (Heyden), Chaitophorus populeti (Panzer), Aphis jacobaeae Schrank and A. grossulariae Kaltenbach.

A complex of raised and transitional sphagnum bogs is developed in the central part of the peninsula. The better drained areas near the shores are occupied by a strip of upland forests from 1 to 5 km wide, mostly represented by green moss, tall moss, and complex pine forests blending into sphagnum pine forests closer to the bogs. Small patches of lichen pine forests are present in the raised areas. The biotic complex of the reserve is affected by the water level fluctuations in the reservoir, due to which its vast shallow peripheral areas are 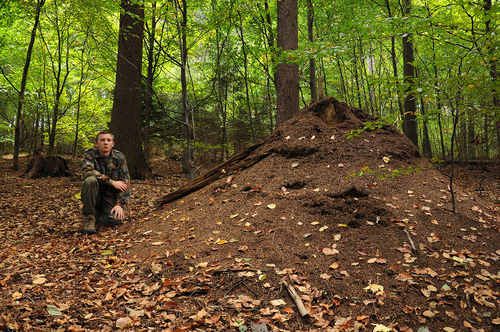 annually flooded and exposed. However, the water level not only changes seasonally within one year but also varies from year to year, so that high-water and low-water years occur. The destruction of mature ant nests by boars leads to complete elimination of many colonies and stimulates fragmentation of the surviving colonies in spring. The results of exogenous fragmentation of the damaged nests include a decrease in the number of large nests, loss of their growth potentials, depopulation, and degradation. Regular and largescale destruction of ant nests by boars leads to rapid degradation and dying off of whole nest complexes (Dyachenko, 1999; Efremov, 2013).

The Eastern complex (Formica polyctena) is located in a maturing green moss pine forest with admixture of spruce and birch in the first layer, the second layer of spruce, and undergrowth of rowan and juniper. In 2001–2004, the complex comprised 30 nests with the mean basal diameter of 130 ± 38 cm and the mean dome height of 45 ± 16 cm. In 2005, the number of nests started to decline, and only 15 nests remained by 2010. The mean dome base diameter decreased nearly twofold, to 70 ± 31 cm, but the dome height was only insignificantly reduced, to 30 ± 16 cm.

Silon Island is a tall ridge of glacial origin. The ant communities of the island were studied in the late 1990s (Rybnikova and Kuznetsov, 1998). The greatest part of the island is occupied by a lichen pine forest which provides little food for red wood ants; therefore, foraging mostly takes place in the riparian zone.

The complex of Silon Island—South. A small complex of F. polyctena exists under the above conditions in the southern part of the island. In 1997, the complex included 18 inhabited nests, which were large, conical, and connected with distinct trails. Some of them reached 70 cm in height (h) and 150–200 cm in dome diameter (d). All the nests were positioned along the shore. The foraging trails extended into the temporary inundation zone, where at a low water level the abundant periaquatic vegetation supported numerous aphid colonies. Since 2003 until now, the water level in the reservoir has remained high, and periaquatic vegetation has been reduced to a narrow stripe of sedges where ants cannot forage. As a result, only three nests have remained there by 2010, all of them being annually destroyed by bears and, less frequently, by boars. The complex is now declining due to a profound reduction of the trophic resources and repeated nest destruction.

Milar et al. (2017) found in an experimental test, simulating being threatened with entrapment in sand (as might happen if falling in an ant lion pit or if subjected to a collapse of a ground nest), that this species did exhibit rescue behaviour. This was in agreement with their hypothesis that species that could face entrapment situations would show such a response. Formica polyctena occur in forest situations. While they have not evolved with ant lion predation they do face possible dangers from being stuck in clay, organic debris or plant secretions. Milar et al. suggested this species had developed a general rescue cue and response that applied even when threatened with an ant lion, which was a novel threat.

Zingg et al. (2018) found that F. polyctena were negatively correlated with the abundance of ticks in a field study conducted in the forests of the Jura Mountains, northwestern Switzerland. They examined the abundance of nymph and adult ticks in paired sites with and without F. polycenta. They found: the presence of red wood ants was negatively associated with the number of questing Ixodes ticks. Ant nest volume was the most important ant related variable and had a strong negative effect on tick abundance. The mechanisms that drive the negative relationship between wood ants and ticks remain unknown.Possible mechanisms include the repellent effect of ant formic acid, and the predatory behavior of the wood ants.

Nielson et al (2018) showed how colonies of this species could be usefully moved into cultivated areas in Denmark to help control pest species.