Extinct or Fossil ants include both specimens fossilized in shale or other stone (compression fossils) and ants embeded in Amber. Copal is a general term that refers to non-fossilized resin material whatever its geological age. Copal older than Holocene is refered to as fossil copal.

The geologic age of the deposits are important in understanding the evolution of ants as well as their extinction and the distribution of ants worldwide. In some cases the surrounding vegetation and insects that are preserved along with the ants allows a partial reconstruction of the habitat and in some cases the microhabitat as well.

Winged and worker ants were much larger in times past so that some ant specimens are still identifiable as ants when found in stone. Specimens preserved in amber are in much better condition allowing for a more reliable identification.

A few plant resins have the ability to fossilize and insects trapped and embeded in this matrix are known as amber fossils. Resin that is older than one million years are designated as amber and younger aged resins are known as copal.

Subfossil resins or Copal can be Carbon-14 dated so that the resin sold as "amber" in Madagascar by gem dealers is approximately 50 years old. The Copal from Colombia has been dated as 250 years old.

Trace fossils of ant nests. The evidence for these fossils representing preserved ant nest structures are based on interpretation of various elements of the ichnofossils that are analogous to modern day ant nests. 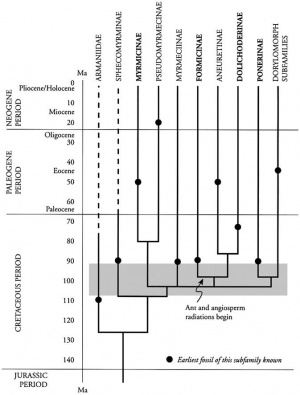 The Cretaceous subfamily Specomyrminae is the most primitive group of true ants. The earliest ants are found in amber dating back to the Cretaceus Period (145.5 to 65.5 million years ago). True ants probably originated no more than 120 million years ago.

Modified after Grimaldi and Engel 2005 The Evolution of the Insects

The Miocene is a geological epoch of the Neogene Period and extends from about 23.03 to 5.332 million years ago (Ma)

The Oligocene is a geologic epoch of the Paleogene Period and extends from about 34 million to 23 million years before the present.

As with other older geologic periods, the rock beds that define the period are well identified but the exact dates of the start and end of the period are slightly uncertain. The name Oligocene refers to the sparsity of additional modern mammalian faunas after a burst of evolution during the Eocene. The Oligocene follows the Eocene Epoch and is followed by the Miocene Epoch. The Oligocene is the third and final epoch of the Paleogene Period.

Oligocene ants from the United States

The Paleocene or Palaeocene, the "early recent", is a geologic epoch that lasted from about 65.5 to 56 million years ago