Difference between revisions of "Camponotus kaura"

Known to nest in hollow twigs and dead stems.

The material available is generally quite uniform in its features, the most obvious variation being in color. While the color is basically yellow or brownish yellow, the amount and intensity of infuscation of the head of the majors is quite variable. In some individuals, the lower two-thirds of the head may be blackish, but more usually the lower portions of the head are distinctly brown and the remainder is somewhat reddish.

One major worker, from the type nest sample, is unusual in that the head, the longest of any measured, is disproportionately slender for the major subcaste, with a CI of 123. This is the only major examined in which the CI exceeds 113.

This is by far the more common of the two species previously misidentified by Wheeler (1908) and all subsequent authors as Camponotus ustus. It is readily separated from Camponotus taino by the smooth malar area and lateral margins of the head, since both are devoid of erect setae. This species is separable from true C. ustus by the differences in head shape and clypeal structure as noted in the key and figures. In Puerto Rico, C. ustus is presently known only from Mona Island. 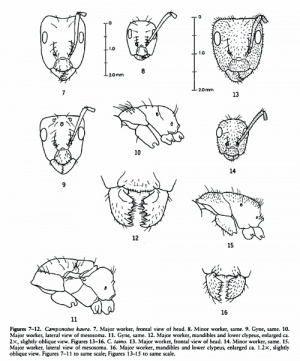 Mesosoma robust, dorsum moderately convex in profile, metanotal depression weak; posterior declivity weakly concave. Pronotal dorsum about 1.2 X as wide as long and about 2.2 X as wide as propodeum at summit of declivity. Profemur about 3 X as long as deep.

Pronotum with about 10 long suberect to erect setae; longest about 0.4 X minimum eye diameter (MOD); mesonotum with (usually) 4 similar setae; summit of propodeal declivity with 1 pair of long, erect setae. Profemur with 2 or 3 widely spaced erect setae along ventral margin, longest no more than 0.5 X depth of femur; meso-and metafemora without erect setae along either dorsal or ventral margins; all femora with several setae at their apices; all tibiae without erect or suberect setae, but each with several bristles at apex; meso-and metatibiae without row of graduated bristles on flexor surfaces.

Petiole scale thin-cuneate in profile, summit narrowly rounded; summit, in posterior view, varying from weakly concave across middle one-half to weakly convex; summit with 2 or 3 erect setae on each side, longest subequal to longest pronotal setae.

Color basically yellow; areas of varying extent on the head may be darker reddish or even brownish; similarly, metasomal terga may be weakly brown-banded.

Head in frontal view less convergent below than in major worker, LHW about 0.75 X HW; vertex nearly straight across middle. Eyes large and extending slightly beyond head margins; EL about 0.8 X OMD; ocelli small, IOD about 4 X OD; OVD about 3 X OD (frontal view). Scape surpassing vertex by about 0.17 X SL. Sculpture and pilosity about as described above for major.

Mesosoma normally shaped for alate female. Dorsal face of propodeum only slightly shorter than declivitous face, abruptly rounded onto it and with 4-6 long setae near summit of declivity. Legs as described above.

Petiole and gaster about as described above.

Males of the 3 species are similar: all are yellowish to brownish yellow, often with limited darker brownish areas on the head and mesosoma. They are similar in size, about 4.5-5.5 mm long. The smallest of the 3 species is Camponotus taino, in which males are seldom over 4.6 mm long, but some individuals up to 4.9 mm long have been seen; HW usually falls between 0.69-0.73 mm and occasionally reaches 0.76 mm. Males of the 2 remaining species, Camponotus kaura and Camponotus ustus, are usually about 5.4-5.6 mm long, but with some individuals above and below that range. In C. ustus, HW ranges between 0.88 and 0.95 mm; too few are available for a trend to be clear, but HW is usually over 0.90 mm. Males of C. kaura are a little smaller, with a HW ranging between 0.78 and 0.91 mm, and in over 90% of the 54 males measured it exceeded 0.80 mm, with over 70% falling between 0.82 and 0.91 mm.

Pilosity of the antennal scape is consistently different between the 3 species. In C. kaura, it consists exclusively of fine, fully appressed pubescence, except for several long, suberect distal setae. The scapal pubescence of C. taino, in contrast, is abundant, coarse, and subdecumbent to suberect; the setae are quite short, less than 0.025 mm long. Camponotus ustus is also provided with an abundance of similar short setae, but in addition there are scattered fine suberect setae that are about 0.08 mm long.

The metatibiae reflect similar differences: setae are fine and fully appressed in C. kaura, relatively coarse and subdecumbent to suberect and uniformly short in C. taino, and, finally, similar to C. taino, but with additional scattered longer setae in C. ustus.

The specific name is a Taino (Arawak) word for a forest dweller; it is to be treated as a noun in apposition.