Boudinot (2015) - The species-level identification of the males described here is uncertain, as unpublished molecular work on Apomyrma has revealed more than one species in the genus (P.S. Ward, unpubl. data). The male described here, “Apomyrma CD01”, differs from other male-based Apomyrma morphospecies by the following characters: head capsule in full-face view shorter, compound eyes more strongly protuberant; and ocelli large (equal in size to morphospecies Apomyrma CF01). The morphospecies probably differ in morphometrics, wing venation, and genitalic morphology, but these character systems were not evaluated as no physical specimens of other morphospecies were available. It may be the case that of the specific lineages of Apomyrma, the male of A. stygia will remain unknown until another nest collection is made.

A strong morphological case could be made to revive the Apomyrminae and remove Apomyrma from the Amblyoponinae. Published molecular studies, however, recover Apomyrma within or sister to the Amblyoponinae, but with weakly supported relationships with either the XMAS (Brady et al. 2006; Moreau & Bell 2013) or the OCP clade (Moreau et al. 2006; Rabeling et al. 2008). Given these results, Apomyrma is conservatively treated as an amblyoponine here, despite compelling morphological characters suggesting a relationship with the Leptanillinae, Opamyrma, and even Martialis. 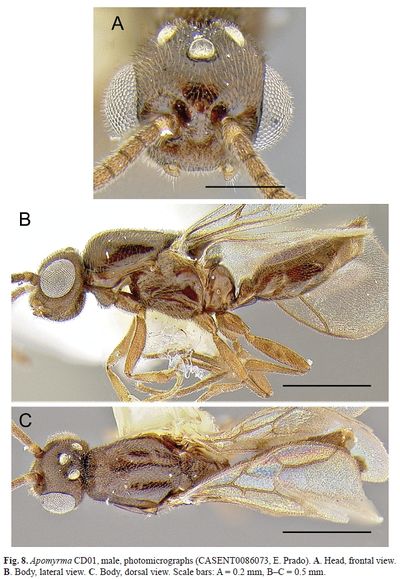 Note Interpretation of the abscissae enclosing submarginal cell 1 is ambiguous. The crossvein 1m-cu may be apically displaced, producing a second Rs+M abscissa which splits into Rsf2 and Mf2, or 1m-cu may be unmoved and Rsf2 may be absent. Without a transitional series it is currently not possible to accurately determine these particular abscissal homologies, although the abscissa in question has a thyridium (weakening), suggesting that it is 2rs-m (the latter case).