Difference between revisions of "Ant Wings"

The evolution of Wing Venation

Perfilieva (2015) - The fore wings of Myrmeciinae have a full set of closed cells and the distally positioned cross-veins while the hind wings possess secondary hamuli and a full set of free longitudinal branches. Wings with a similar venation type can be found in Pseudomyrmecinae, some Dolichoderinae, and the poneromorph subfamilies. The recent Myrmeciinae can be reliably differentiated from the representatives of Pseudomyrmecinae and Dolichoderinae having wings of the same type by some venation traits, namely the proximal position of cross-vein cu-a and the size and shape of the radiomedial cell. 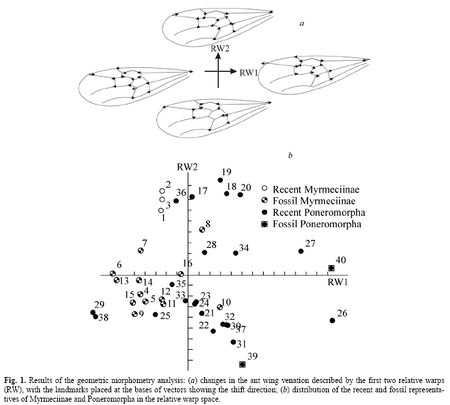 In my earlier paper, 16 types of fore wing venation were distinguished in the recent representatives of Formicidae (Perfilieva, 2010). Most of them co-occur in several subfamilies; some types are much more frequent than others, i.e., they represent stable constructions in a certain sense. Thus, similar wing morphology has been the result of parallel evolution in different taxa. At first sight it may seem that such homoplasies would considerably reduce the diagnostic value of the venation characters. However, since the same type of venation was acquired by different evolutionary transformations in different phyletic lineages, some varied specific traits can be found even within one type of wing venation. For example, some representatives of the three largest ant subfamilies, Dolichoderinae, Myrmicinae, and Formicinae, have the same type of fore wing venation characterized by reduction of the radiomedial cell (Fig. 3). The curved vein limiting cell 1+2r in Dolichoderinae and Myrmicinae (see Figs. 3a, 3b) indicates that cell 1+2r in these wings is homologous to the same cell of the plesiomorphic wings in which the radiomedial cell is present; therefore, the lower boundary of the cell is section 2-3RS. At the same time, cell rm was reduced due to the disappearance of the corresponding (third) section of vein M. In this case, the difference between the subfamilies is marked by the state of cell 3r (enclosed in an oval in Fig. 3). In Formicinae an elongated and apically directed section 2r-rs combined with a straight or curved section limiting the lower margin of cell 1+2r and a closed cell 3r, indicate that in this subfamily cell 1+2r originated by merging of cells rm and 1+2r of the ancestral wing (see Fig. 3c). In the members of Myrmicinae having the same venation type, the lower margin of cell 1+2r is straight (Fig. 3d) but, in contrast with Formicinae, cross-vein 2r-rs is short and vertical while cell 3r is open (Figs. 3c, 3d). These traits of the wing of Myrmicinae were produced by reduction of section 2-3RS and shortening of cross-vein rs-m.

During assessment of differences in venation, the states of individual characters and their combinations are equally important. For example, poneromorph ants of the genera Diacamma, Pachycondyla, Platythyrea, Odontomachus, Paraponera, etc. never possess the combination of characters typical of Myrmeciinae, even though some individual characters may be similar. These differences can be observed in the wings shown in Fig. 2. In the wing of Platythyrea section 4RS is short or absent, rs-m is positioned proximal to the pterostigma apex, m-cu is more proximal than in Myrmeciinae, Rs2 is incomplete, 2r-rs is not inclined, and 1RS in the hind wing is absent. The venation of Diacamma rugosum is very similar to that of Myrmeciinae, but section 4RS is shorter (rs-m lying at the level of or proximal to the pterostigma apex), 2r-rs is not inclined, and cell 3r is relatively long. The genus Paraponera differs from Myrmeciinae in the proximal position of m-cu, a different ratio of 2M/RS+M, the inclined 2r-rs, and the relative length of cell 3r. The wing of Pseudoponera stigma differs from that of Myrmeciinae by the following combination of characters: rs-m and m-cu are in the proximal position, the distal angle of cell mcu lies closer to the lower wing margin, and cell 3r is long (Fig. 2i). The venation of Paltothyreus tarsatus resembles that of Myrmeciinae in many characters and was even described as “indistinguishable” from the latter (Archibald et al., 2006). However, as can be seen in Fig. 2l, the wing of P. tarsatus has a relatively long cell 3r and a considerably modified shape of the mediocubital cell due to the changes in the length and incline of m-cu. To summarize the qualitative comparison of the fore wings of Poneromorpha and Myrmeciinae, the following complex of venation characters of the recent Myrmeciinae can be distinguished: 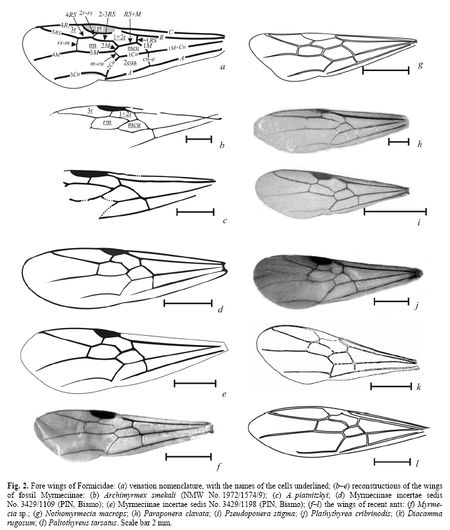 (1) The complete set of closed cells.

(2) The mediocubital cell is distal and relatively large, with its distal angle positioned at the level of, or distal to the pterostigma base; section 2M is considerably shorter than RS+M while m-cu is relatively long and parallel to section 1M.

(3) The radiomedial cell is relatively large, with a relatively long section 4RS, comparable with 2-3RS, and with rs-m positioned distal to the pterostigma apex.

(4) The length ratio of cells 1+2r and 3r is no less than 2/3, so that the 3rd radial cell is relatively short; section 2r-rs is distinctly inclined toward the wing apex.

These conclusions were confirmed by analysis of the integral quantitative characteristics of wing variation (Fig. 1). As can be seen in the plot, the middle zone of the wing (cells rm and mcu) consists of two subzones which determine the differences between the groups along the RW axes: proximal (veins 1RS, 1M) and distal (veins m-cu, 2r-rs, rs-m, 2Cu). A considerable contribution to the differences was made by the landmark point at the apex of cell 3r which characterized the relative length of that cell. The actual position of Archimyrmex piatnitzki (point 8 in the plot) relative to the ordinate axis may be quite different, because the wing apex was absent in the impression. In short, the recent Poneromorpha are characterized by a longer cell 3r, a smaller cell mcu, and a more proximal position of rs-m (a short section 4RS).

The complex of diagnostic characters of the wing of the recent Myrmeciinae was not found in the fossil representatives of this subfamily (Figs. 1, 2). By contrast, the fossil poneromorph ants included in analysis were indistinguishable from the recent ones. The studied Paleogene myrmeciines revealed the character states intermediate between Poneromorpha and Myrmeciinae. The poneromorphs had a much longer cell 1+2r, whereas the fossil myrmeciines were distinguished by a very small 1+2r. The extinct Myrmeciinae, unlike the recent ones, had a more variable relative length of cell 3r and a shorter mcu (Figs. 1, 2).

It should be noted that, even though it was possible to determine a special diagnostic complex of characters for the fossil myrmeciines in our material (see Figs. 1, 2), Myrmeciites tabanifluviestensis still has more “poneromorph” wings than the rest of the Paleogene myrmeciines, in particular, the inclined m-cu. The main characteristic trait of the fossil myrmeciines is the relatively small cell 1+2r (as compared with the recent representatives). Other specific traits in the venation of the fossil myrmeciines (except M. tabanifluviestensis) are (1) a relatively large cell mcu, with vein m-cu considerably inclined, so that the inner angle of mcu between 1Cu and m-cu is no less than 130° (in the recent myrmeciines the value is usually the same or greater while in poneromorphs it is usually smaller, corresponding to a more vertical m-cu); (2) vein 2M not shorter than half the length of RS+M.

As shown by previous research (Perfilieva, 2010), the main traits of progressive evolution of the ant wing venation include, among others, the basal shift of the cross-veins. By these characters, the wings of the studied fossil Myrmeciinae should be considered more primitive than those of the recent Poneromorpha (the distal position of rs-m, the long section 4RS). However, in Poneromorpha the process of basal shift of the cross-veins included the entire central zone of the wing, whereas in the recent Myrmeciinae it was restricted to the proximal elements (1RS, 1M, cu-a). This led to the formation of a large and elongated mediocubital cell combined with the distal position of crossveins m-cu and rs-m. In view of this, the origin of the “neutral” character of the recent Myrmeciinae, namely the relatively short cell 3r, can be explained: cell 1+2r elongated due to the basal shift of 1RS while cell 3r remained unchanged.

Thus, the venation characters common to the Paleogene myrmeciines overlap with those of the recent Poneromorpha and Myrmeciinae. It is interesting that studies of other external morphological characters used for diagnostics of the fossil Myrmeciinae gave similar results. Dlussky (2012) showed the recent Poneromorpha and Myrmeciinae to be fairly well differentiated by the combination of two characters: the ratio of abdominal segments III and IV and the relative size of the mandibles. The Paleogene genera of Myrmeciinae (except Archimyrmex and Prionomyrmex) overlap considerably by these parameters. It should be noted that the recent Myrmeciinae are represented by only two genera, whereas the fossil ones, by several genera. Although this fact requires additional investigation, the consistent tendencies and fairly distinct grouping of species in the RW vector space suggest reliability of the results obtained.