Adelomyrmex includes some of the least known myrmicine ants. Winged queens and males were until recently largely unknown from across wide portions of the genus' range. The discovery of the male of Adelomyrmex vaderi and subsequent identification of diagnostic characters for this sex (see Boudinot 2015 for some of these details) led to the discovery that many Adelomyrmex males have been collected in Central American malaise samples (Smith et al. 2015). Winged queens remain elusive.

Fernández (2003) - Adelomyrmex is defined by at least three traits postulated to be synapomorphic, that establish the putative monophyly of this taxon.

(1) Clypeal structure: elevated medially, in form of a very narrow longitudinal platform, with sharply delimited lateral borders. From this median platform the clypeus is sloped laterally in form of a concavity each side, and in lateral view forms a ventral concavity. The anterior clypeal border, in the elevated portion, is formed in some taxa as a slightly or distinctly defined bidentate projection, the median clypeal teeth. The anterior clypeal margin possesses, in most species, a pair of teeth, one on each side of the median proyection, generally close and opposed to the teeth of the basal margin of mandibles, the lateral clypeal teeth.

(3) Mandibles with a tooth near the proximal quarter of the basal margin. In general it is followed by a hiatus or notch of variable size. In most of the species these teeth are (with the closed or almost closed mandibles) opposed to the teeth of the anterior clypeal margin (the lateral clypeal teeth). Additionally, the palpal formula is 2,2 or less.

The basal mandibular tooth isolates Adelomyrmex not only from its close relative, Baracidris, but from most other myrmicines (Perissomyrmex possesses teeth in the basal margin, but this is a very distant genus; Longino & Hartley, 1994). In some workers of Adelomyrmex tristani and Adelomyrmex silvestrii, this tooth is hardly noticed, but this may be interpreted as secondary reduction.

Fernández (2004) created a generic group consisting of Cryptomyrmex, Adelomyrmex and Baracidris that shared the following characters: With characters of solenopsidine tribe group (Bolton, 2003:57). Mandibles with four to seven teeth in the masticatory border (Fig. 4). Basal margin of mandibles simple to armed. Internal side of mandibles with a row of 2-3 to 5-6 hairs modified as lamelliform setae. Clypeus with median longitudinal plate, ridge or strip raised (Fig. 3). A median clypeal seta usually present. Palpal formula 2,2 or less. Antennae 12 segmented, with club 2-segmented. Propodeum angulated or armed with teeth. U-shaped sulcus in the basalmost portion of the first tergum. Monomorphic.

These three genera can be separated using the following key:

Represented in the Neotropical Region by more than 20 species ranging collectively from northern México to southern Brazil and Paraguay, but absent from Chile, in the south, and from the West Indies, in the Caribbean Basin. The three species of the Old World inhabit islands (Fiji, Samoa and New Guinea) more or less near the Australian continent.

Longino (2012) - In Central America, Adelomyrmex occur primarily in mature wet forest habitats, in rotten wood and leaf litter on the forest floor. They are far more abundant in montane cloud forest than in lowland rainforest. In some cloud forest habitats they can occur in nearly 100% of miniWinkler samples (1 m 2 samples of sifted litter) and dozens of individuals may occur in samples. In lowland rainforest they are rare, occurring in fewer than 10% of miniWinklers, and usually as one or two individuals per sample. Highland species are typically larger as well. Thus in some cloud forests Adelomyrmex make up a large proportion of the ant biomass (often sharing that role with another dominant cloud forest myrmicine genus, Stenamma; see Branstetter 2009). In contrast, in lowland habitats they are very rare and a minute proportion of the biomass. In South America they are always rare, whether in lowlands or cloud forest (Fernández, pers. comm.). Foragers are almost never seen.

Adelomyrmex workers generally have small eyes and presumably forage almost entirely beneath the litter. In baiting transects in cloud forest, Adelomyrmex are occasionally encountered, but not in numbers that reflect their abundance in sifted litter samples. Nothing is known of their feeding habits.

Given their abundance in cloud forest Winkler samples, remarkably few nests have been observed. Small nests of Adelomyrmex tristani and Adelomyrmex paratristani are occasionally found in bits of rotten wood on the ground. The dark workers curl and lie motionless on disturbance, blending with the background debris. Only the white brood gives them away. An exception is some montane sites in Guatemala and Chiapas where Adelomyrmex robustus occurs. Adelomyrmex robustus can be a more conspicuous presence, with large colonies in rotten wood at forest edges. Adelomyrmex bispeculum, a species endemic to Monteverde, Costa Rica, is only known from three nest collections. These nests were in small chambers in clay soil, one beneath a stone and two in a vertical trailside bank. It is revealing that this species has not been collected in the hundreds of sifted litter samples taken in the Monteverde area, in which A. tristani is very abundant. It suggests fine-scale microsite segregation of Adelomyrmex species.

The reproductive biology of Adelomyrmex is mysterious. In Winkler samples, Adelomyrmex workers are routinely accompanied by wingless queens and intercaste individuals. The queens are about the same size as workers but with ocelli, large compound eyes, and the typical enlarged mesosoma of myrmicine queens. The typical sclerites of winged queens and apparent wing scars are present. One queen of Adelomyrmex silvestrii from a Winkler sample has a shred of membranous wing, as though it were irregularly torn or chewed off. Intercaste individuals show variable intermediacy between workers and queens, with variable presence of a single median ocellus, compound eyes of intermediate size, and an enlarged promesonotum. Winged queens have never been seen for most species. Alate queens are known from Adelomyrmex vaderi in Colombia (Fernández 2003). The results presented here suggest a high degree of endemism, with numerous isolated mountain-top species. Preliminary DNA barcoding results often suggest deep historical divisions between geographically separate populations of what are considered single species on morphological grounds. These results, along with the lack of winged queens suggest a lineage with extremely low dispersability and gene flow, perhaps contributing to the high levels of endemism and geographic variation.

Myrmicine ants with the following combination of characters:

Mandibles with 4 to 6 teeth in the masticatory margin.

Internal side of mandibles with a row of 2–3 to 5–6 hairs modified as lamelliform setae.

Propodeum angulated or armed with teeth.

U-shaped sulcus in the basalmost portion of the first abdominal tergum. 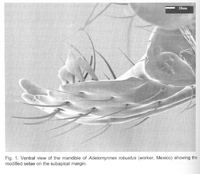 Worker Monomorphic, length from 1.80 to 4.2 mm. Body variously sculptured, from striate to coarsely reticulorugose. Erect or suberect setae on body, shorter and appressed on antennae and legs.

Gaster oval (in one species with anterior angulate emarginations). Gaster smooth and shining to subopaque. Black to light brown in color. Sting large.

Queen: As worker, differing from workers in the normal myrmicine queenly traits. General body size as in worker in some species. Ocelli three; anterior ocelli in fossae. Eyes with more than 120 facets. Anterior promesonotal area smooth and shining, posterior area sculptured. Most of katepisternum smooth and shining. Wings as in figure 43, densely and finely setose.