A South American species that has spread to other areas of the Neotropics. Strumigenys silvestrii likely has similar food habits as the three highly successful Old World tramp dacetine ants, Strumigenys membranifera, Strumigenys emmae, and Strumigenys rogeri, preying on tiny soil arthropods, such as Collembola (Wetterer, 2011, 2012a, b). The ecological importance of these dacetine invaders, however, remains largely unstudied.

Bolton (2000) - A member of the Strumigenys silvestrii-group. Within the silvestrii-group 6 species have pilosity on the first gastral tergite that is not predominantly or entirely of fine elongate or flagellate hairs. In these 6 the pilosity of the first gastral tergite is of spatulate, remiform or simple stiff hairs. One such species, Strumigenys ascita, has two narrowly spiniform preapical teeth on each mandible, as opposed to one tooth and a minute denticle in the remainder. Three species of Central American origin (Strumigenys calamita, Strumigenys perdita, Strumigenys nastata) retain spongiform tissue on the ventral surface of the petiole and have two pairs of short erect hairs on the cephalic dorsum. In the last two species, Strumigenys epelys and silvestrii, the petiole lacks spongiform tissue ventrally and the cephalic dorsum bears only a single pair of short erect hairs. Of these two species epelys lacks the projecting hairs on the head and alitrunk that are listed above for silvestrii. Finally, silvestrii is the only species of the 6 to have its distal preapical tooth set very close to the apicodorsal tooth.

Apparently from South America and subsequently spread to the southern US and the West Indies. Strumigenys silvestrii has recently been found for the first time in the Old World, from the island of Madeira, mainland Portugal, and Macau. (MacGown et al. 2012) 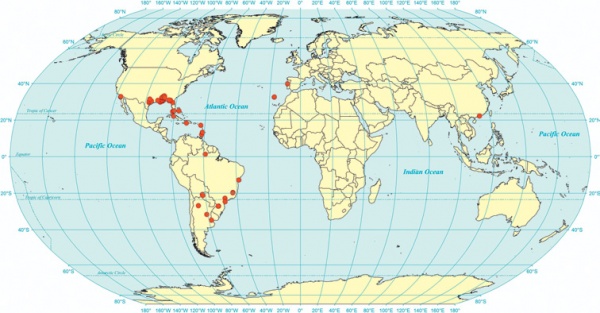 Not much is known about the biology of this species. In general, (for species in this genus) Strumigenys were once thought to be rare. The development and increased use of litter sampling methods has led to the discovery of a tremendous diversity of species. Many species are specialized predators (e.g. see Strumigenys membranifera and Strumigenys louisianae). Collembola (springtails) and other tiny soil arthropods are typically favored prey. Species with long linear mandibles employ trap-jaws to sieze their stalked prey (see Dacetine trap-jaws). Larvae feed directly on insect prey brought to them by workers. Trophallaxis is rarely practiced. Most species live in the soil, leaf litter, decaying wood or opportunistically move into inhabitable cavities on or under the soil. Colonies are small, typically less than 100 individuals but in some species many hundreds. Moist warm habitats and micro-habitats are preferred. A few better known tramp and otherwise widely ranging species tolerate drier conditions. Foraging is often in the leaf litter and humus. Workers of many species rarely venture above ground or into exposed, open areas. Individuals are typically small, slow moving and cryptic in coloration. When disturbed individuals freeze and remain motionless. Males are not known for a large majority of species.

Bolton (2000) - TL 1.6 - 2.0, HL 0.42 - 0.49, HW 0.33 - 0.37, CI 76 - 80, ML 0.22 - 0.26, MI 50 - 57, SL 0.24 - 0.31, SI 76 - 86, PW 0.21 - 0.25, AL 0.38 - 0.48 (6 measured). Apical fork of mandible usually with a minute intercalary denticle, may be very difficult to see; absent in some. Mandible with preapical tooth located very close to apicodorsal tooth; the two almost adjacent and the length of the preapical tooth greater than the distance between it and the apicodorsal. A minute denticle also present on inner margin of mandible, often difficult to see, located close to midlength. Ground-pilosity of head and leading edge of scape fine and slender, narrowly spatulate. Specialised projecting hairs on head and alitrunk stiff, feebly remiform or somewhat flattened apically: in apicoscrobal position; a short pair on cephalic dorsum close to occipital margin; at pronotal humerus; a pair on mesonotum. All hairs on first gastral tergite narrowly remiform and elevated, inclined toward midline in dorsal view, in profile appearing curved or inclined posteriorly. Petiole node in dorsal view slightly broader than long; ventral surface of petiole without spongiform tissue and lateral spongiform lobe vestigial to absent, at most nothing more than a slight expansion at apex of the posterior collar. Disc of postpetiole mostly or entirely smooth, at most with some faint superficial vestiges of sculpture.