In Costa Rica, nevermanni occurs in wet forest habitats. It nests and forages in the low arboreal zone and in some cases in litter on the forest floor. The lone USA record is curious. I was collecting from cynipid oak galls near Austin, Texas, many of which were inhabited by nests of Colobopsis etiolata and Camponotus discolor. In one nest of C. discolor, I also found three workers of S. nevermanni. (Longino, Ants of Costa Rica)

Bolton (2000) - A member of the Strumigenys emeryi-group. S. nevermanni should not be confused with any other member of the group. The narrow concave propodeal lamella, extremely reduced but still obvious spongiform strip ventrally on the petiole and the smooth postpetiole form a combination that identifies the species. It is similar to Strumigenys micretes but that species, apart from having a broad propodeal lamella and deep spongiform curtain on the petiole, has distinctly longer scapes (SI 96-102) and usually a narrower head (CI 69-75).

This is the only species of the group so far recorded from the U.S.A., although others are known from Mexico. Whether it is a naturalised species or must be regarded as a casual introduction in the U.S.A. remains to be seen. The variation of gastral pilosity is interesting. Very few individuals have it entirely flagellate, in fact most samples show very few or even no flagellate hairs on the first tergite. The fact that a few samples occur that show a mixture of both forms of hair, in varying amounts, indicates that only a single species is represented. 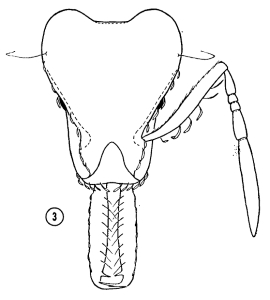 Mandible with a small preapical tooth close to the apicodorsal tooth. Proximally the mandible is usually edentate but in some an additional minute denticle is present. Both pairs of standing hairs on cephalic dorsum stiff, simple to spatulate. Apicoscrobal hair and pronotal humeral hair flagellate; a flagellate pair present on mesonotum. Standing hairs on first gastral tergite varying from mostly simple to mainly subflagellate or flagellate; sometimes all hairs similar but frequently a mixture present. Pronotal dorsum reticulate-punctate and with weak rugulose or costulate sculpture; intensity of each component variable. Mesopleuron and at least part of metapleuron smooth. Propodeum with a pair of stout triangular teeth or short spines, subtended by a narrow lamella whose posterior (free) margin is concave down the declivity. Propodeal lacuna vestigial. Ventral surface of petiole with a very shallow spongiform strip that, at the midlength of the peduncle, is merely carinate or at most only a fraction (much less than half) of the depth of the peduncle. Petiole node in dorsal view broader than long and reticulate-punctate. Disc of postpetiole mostly or entirely smooth. In profile lateral spongiform appendage of postpetiole a broadly triangular lobe; ventral spongiform lobe larger, at least equal to the area of exposed cuticle of the disc.